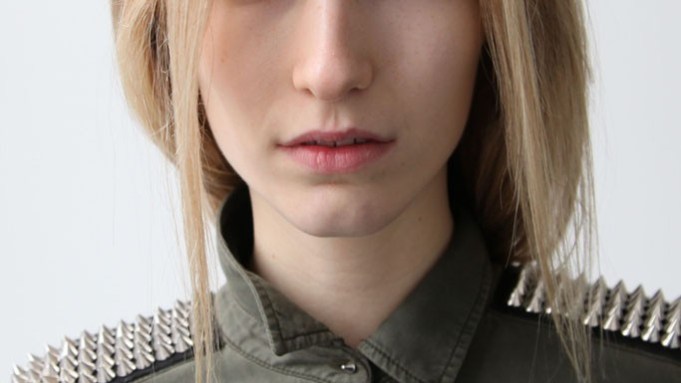 In her first runway season (spring 2013), Manuela Frey nabbed exclusives at Jil Sander and Saint Laurent. She topped that for fall with turns at Burberry, Dolce & Gabbana, Alexander McQueen and Chanel — as well as an exclusive opening at Calvin Klein. And, oh yeah, she’s only 16. Back in the city after a brief trip home, Frey sat down with WWD to talk about her new career.

WWD: Are you still in school right now?
Manuela Frey: No, I finished school last summer. In Switzerland you can finish school at 16, and then you decide if you want to work or do more school. I always wanted to be a model. When I was three years old, I stole the high heels of my grandma and I did a little show. So then when I was 15, I took part in the Elite Model Look last summer in Switzerland and I won. When I was 14, my mother told me “No, Manuela, please finish school first, and then you can do what you want.” She thought I would forget about it, but then the next year I won.

WWD: Had you modeled before entering the competition?
M.F.: No. [During the competition,] we had a lot of catwalk training, and that was new for me. I’d just tried to walk on my floor at home. The neighbors below us were like, “Oh no, the shoes are on all the time!”

WWD: What was the competition process?
M.F.: The casting was in March, and the final was in August. They saw us maybe three times for practice, and one week before the final we trained a lot. The final was giant for Switzerland. It was a runway show for [Swiss department store] Jelmoli. When they called my name as the winner, it was really a dream.

WWD: What came next?
M.F.: The world finals were in Shanghai at Christmas time. In between, I did the Jil Sander show in Milan. It was my first show, and then in Paris I did the Saint Laurent exclusive. That was my second big show.

WWD: What was it like walking in such major shows?
M.F.: It was amazing because I had never done a show like that, and I had a perfume from Jil Sander. It was like, “I am wearing this perfume and now I can do the show.”

WWD: So then after Paris and Milan…
M.F.: Then I went to Shanghai. There were 70 girls in the final, and I came in third. The top three got a contract with Elite all over the world. When I won third place, I was more than happy.

WWD: Tell me about your first full runway season in February.
M.F.: It was really crazy because normally you have three or four castings a day, but I had 20! It was very stressful. So, I did my castings, and then I got a call from my agency saying, “Manuela, stop all your castings.”

WWD: What was Calvin exclusive like?
M.F.: I worked for them for one week doing fittings. Francisco Costa is so funny. One time he wore his own high heels and dress and danced around. It was really cool! I like him.

WWD: When did you find out you were opening the show?
M.F.: One day before. I was eating lunch when Rami and Maida, the casting directors, told me. I was so surprised because I’m so young and there were so many good models in the show.

WWD: Do any other shows stand out in your mind?
M.F.: Everything is amazing at Alexander McQueen, you know? I wore a very special dress. The headpiece was very heavy. Three hours before the show, they told me, “Anna Wintour is coming backstage, you should wear your dress now.” So then I [put on] the dress and heels and I wanted to sit down, but they told me, “oh, you can’t sit down.” Three hours! My feet were so hurting.

WWD: What have you been up to recently?
M.F.: I did some jobs in Switzerland and London. I went to Spain to do a look book. Last week I arrived here to New York, so now I’m doing castings. I had the weekend off.

WWD: What did you do?
M.F.: I went out with my Swiss friends — they are doing holiday here for one week. We went to Central Park and borrowed some bikes and rode around. After we just cooked something for dinner in their hotel.

WWD: Have you discovered any new American food?
M.F.: For breakfast I had this hot meal…

WWD: Oatmeal?
M.F.: Oatmeal, yeah. I love it! In Switzerland there isn’t oatmeal.