The 22-year-old Bulgaria native has graced the pages of Marie Claire, Elle, British Vogue and recently landed the cover of Vogue Turkey’s May issue. 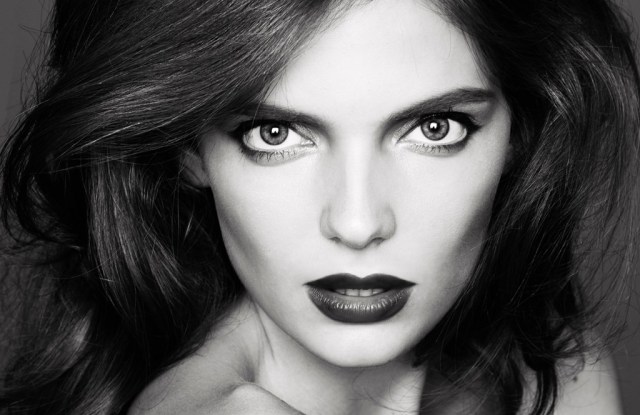 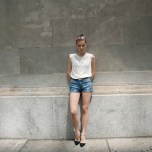 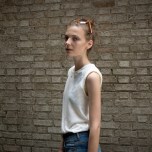 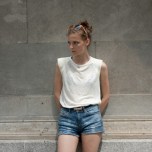 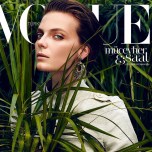 “Everyone [back home] is really happy for me because Bulgaria is a small country and this is big,” said Nora Shopova, repped by One Management, stopping by WWD’s Manhattan office in between a full day of “five or six castings.” The 22-year-old Eastern European model has graced the pages of Marie Claire, Elle, Harper’s Bazaar Bulgaria, British Vogue and recently landed the cover of Vogue Turkey’s May issue, as well as some indies: Oyster, Gravure and 12 magazine. She’s also been featured in look books for Club Monaco and Mytheresa.

Sweet and soft-spoken, Shopova’s career took off a little over two years ago while she was studying law at university, after a model friend in Bulgaria suggested that she visit some agencies there. Her face — all angles and wide-set eyes — might remind you of another model’s, but more on that later. “I think it’s better if I do editorials, commercials and campaigns because I’m not the tallest model,” said Shopova, who, outside the context of the industry, still stands pretty tall at 5-foot, 9-inches. “Editorial is my strength, actually. I love shooting, though I’m always a bit afraid when I have to travel somewhere for a job. People always expect the best from you, and sometimes you’re just tired or you have to study.”

WWD: How did you start modeling?
Nora Shopova: I had never wanted to be a model, actually. I was out with friends and I met one model, and she told me that my face was different and that I should go to some agencies. I went to her agency, Ivet Fashion Model Agency — which is a mother agency — and her booker loved me. I started working so fast. I couldn’t even think about whether I wanted to do it or not.

WWD: What was going on in your life when you got scouted?
N.S.: I just had started my university studies. I study law in Bulgaria. I haven’t graduated yet, I have two more years. I have a sister who’s two years older than me and she studies law, too. I thought it might be interesting for me.

WWD: What was it like growing up in Bulgaria?
N.S.: I grew up with my sister in my birth town, Panagyurishte. Then when I went to high school I moved to a bigger city, and then I went to the capital to live and study. I loved my childhood because when you grow up in a small town you appreciate everything and all of the people around you. When I became a model, I wasn’t superexcited about it. I didn’t think of it as a big deal because it’s just a job.

WWD: Has your family been supportive of your career?
N.S.: In the beginning, they were not because every parent is like, “I don’t want my child to be out somewhere alone in the world.” That’s why I keep doing my law school. I don’t want to disappoint anyone and I want to have an education. But they support me now. They always have one of my magazines with them. I try to talk to them a lot, but I can’t because there are seven hours difference between here and my country.

WWD: How long are you in New York?
N.S.: I am here for two months. Then I will go back to Bulgaria, and maybe then I’ll go to London. I can’t just settle in New York so I book some direct jobs and travel around Europe mostly.

WWD: Do you enjoy living here?
N.S.: The first time when I came here, I felt so uncomfortable. I was pretty young and this was my first trip. I didn’t like it at all. Now I love it. I live in a model apartment in Chelsea. I really like the neighborhood. I would love to have my own place. I always live with really nice girls, but there’s not much privacy. And everyone needs privacy. That’s the minus.

WWD: What do you like to do in your free time?
N.S.: I love taking a walk on the Hudson River Park. I like walking and exercising, and I always bring my book with me. I just finished “The Forty Rules of Love” by Elif Shafak. I try to read deeper books so I can learn more things from life because I know I’m young and I can’t experience everything. I have a couple friends here and we love going out together. I always try to do something in my free time. I never just stay at home.

WWD: Do you think your modeling experiences have changed you as a person?
N.S.: When I started modeling, I wasn’t that much into fashion. I didn’t think it’s so interesting as it is. I grew up faster for sure, because when you start traveling you start being on your own. And after I started modeling, I knew who my real friends were because they were always waiting for me back in my city. Some friends care for you only when they want something from you, or when you’re around. So now I know who I should bring home presents for. (She laughed.)

WWD: How about your sense of style — has that changed at all?
N.S.: Before I started modeling, I loved colors. Now it’s just black and white. I really like the New York style. In Bulgaria people try to follow the tendencies, but all of the fashion goes to Bulgaria a little bit late. If I were into something the last season, people would wear it this season.

WWD: Do you have a favorite editorial job?
N.S.: I really enjoyed my Vogue sessions and working with Marie Claire. When you work for such big companies, they really care for you and you give your best for them. I’ve done some smaller campaigns and I hope I’m gonna do some nice campaigns in my near future. But I just came so I should have some more patience.

WWD: Has anybody ever told you that you look like….
N.S.: Eniko [Mihalik]. Everywhere I go, they’re like, “You look like Eniko Mihalik.” I think I look like her, too. When I go to the castings this is the first thing the photographer says. I don’t mind at all because she’s working a lot and she’s a really good model.

WWD: What’s the weirdest thing you’ve had to do on a photo shoot?
N.S.: I can tell you what the weirdest thing I’ve had to do on one of my castings. For the first time, two days ago, I was on a casting and they were like, “OK, now, you should kiss that boy.” And I was like, thanks God [sic] I don’t have a boyfriend, because that would be awkward. He just started kissing me — like a real kiss! They were like, “OK that was nice, can you please repeat it one more time so we can record?” It’s because the photo shoot would be with a guy, so they want to see [if I would have chemistry.] And once, I had a shoot on the rooftop and we needed rain and there was no rain, so they were just throwing some water on me. But the pictures were so nice.

WWD: I saw another editorial where you had a mouth full of gummy bears.
N.S.: Yes. After that shoot, I ate them all.

WWD: What are some of your goals, in modeling or otherwise?
N.S.: I really wanna find true love. Because everyone does, everyone wants to have a family. It’s really hard when you’re modeling. I had a long relationship but it’s really hard when you’re traveling so much. People don’t look as you like a real person, they just look at you as a model. On my to-do list, I also want to get a tattoo, but I will keep it a secret. It’s a really important word for me. I wanna go roller skating and I want a bike here. And I want to go for a holiday with my friends, maybe in Greece. It’s close to Bulgaria and it’s beautiful.