The half-Venezuelan, half-Chilean model with a septum piercing and countless tattoos spent six years in Thailand before moving to New York. 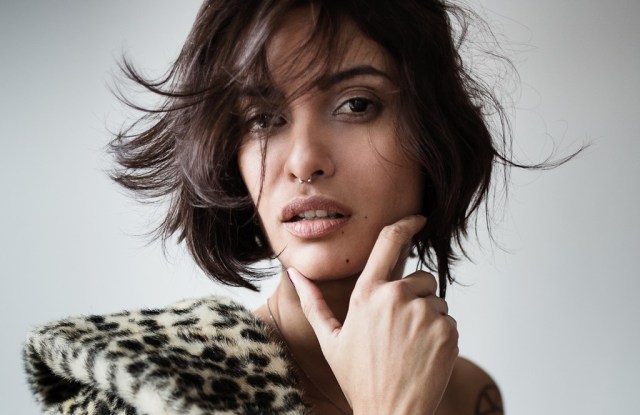 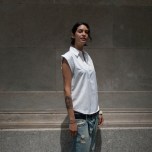 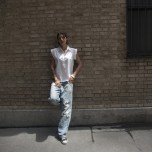 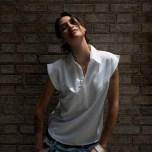 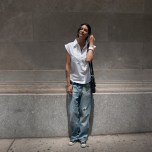 “I’m so sad I’m not watching the game,” said Pilar Moraga Thursday at WWD’s office, while TVs across the city broadcast Germany and the U.S. duking it out in the World Cup. (Germany won, 1-0.) Missing the game was painful for the 26-year-old, half-Venezuelan and half-Chilean model, who spent a while living in Germany when she signed with Munich Models there (hence her allegiance to the team). Moraga is something of a tomboy — and a world traveler. Born in Venezuela, Moraga’s modeling career brought her first to Santiago, Chile, where she was discovered, then on to Europe, where she spent some time across Germany, Prague and Milan. A few months ago, she landed in New York for the first time, fresh off a six-year stint in Thailand.

“I just saw all these guys watching it at a bar, and I was like, ugh!,” said Moraga, wearing oversize denim reminiscent of Nineties-era JNCO skater jeans. “I’ve loved Germany my whole life. But at the same time, I like the United States. I’m confused.”

Moraga, who is repped by One Management, has been modeling in South America and Europe since age 17. She took after her elder sister Fanny, who was a beauty queen in Venezuela, though pageants weren’t exactly Moraga’s thing. She was cast on the spot for her first New York runway show, Ohne Titel, last February, and she just got back from a Marie Claire editorial shoot with David Gubert in Barbados. She’ll be living in a model apartment in Manhattan’s Chelsea neighborhood developing her portfolio until the upcoming show season.

Moraga, who has a septum piercing and countless tattoos, misses her family back home in Venezuela and speaks to them every day. “It’s a long time that I haven’t been in Venezuela,” she said, through a thick Spanish accent. “But if I go there, I’m going to eat my mom’s food and I’m going to get so fat. I gotta stay focused.”

WWD: How did you start modeling?
Pilar Moraga: I really liked to be a model from very young. I was, like, the ugly duck in the school. It’s cool. But my older sister, Fanny, was a Miss Venezuela contestant. I started imitating her. Every morning I would watch the fashion shows on television. I was obsessed. I started working in Venezuela, but not professionally, just as a hobby. Then I moved to Chile and started to knock on doors. I met a really big producer in Santiago, and after that I didn’t stop working. I was about 17.

WWD: Where did you go from there?
P.M.: I get bored easily. I don’t like routine. I told my agency I wanted to travel, and they sent me to Germany. I was like, ‘Hell yeah!’ I started to travel to Milan, Prague, Ibiza.…I was signed with Munich Models.

WWD: And you eventually tried out for Miss Venezuela, too, right?
P.M.: Yes, and thank God I didn’t get it. Osmel Sousa — the head of the Miss Venezuela pageant — I think he had his favorite girl already picked out, and I flew there [able to speak] English, I told him all the places I had been and what I had done…and ultimately, he said no. Thank God, because I wasn’t born for beauty contests. That is not me. That is so girly.

WWD: How did you end up in Thailand?
P.M.: While in Prague, I met the director of Elite Thailand. He wanted me to sign and move to Thailand. There was the real culture shock. To see all the chickens hanging in the carts in the street — it’s crazy. If you’ve never been to Asia and then you go there, it was just…different. I was crying. I wanted to go back to Milan. I was young, I was 20. But after two weeks I started going out with models around Bangkok and started to love it. I didn’t want to leave. Living in Thailand is not expensive and it’s so safe. I decided to stay there [for six years]. And then I met an agent at One Management while he was on holiday in Thailand. He wanted me in New York.

WWD: And now you’re in New York.
P.M.: Yes. I like it more now because it’s summer. I came in February and it was so cold — I was freezing. It was the worst winter that I had ever been in. In Germany, I was never there in winter. And in Chile, the winter is stupid. So I went back to Thailand for a month and came back to New York two months ago. So now I’m here, getting ready for the busy season. I live in a model apartment in Chelsea. The first time around I was living in Brooklyn and it was very chill, super quiet. But Manhattan is more my place with all the buildings, more things going on. I spend a lot of time with Russians. They’re nice. I know some New York girls. I’m trying to date someone. Oh my God, it’s so hard.

WWD: Let’s talk about your tattoos.
P.M.: I got the first one in Chile. It’s on my back. I don’t like it that much, but I don’t see it every day, so it doesn’t bother me. It’s of my family names. Some of my tattoos have meaning and some of them don’t. Like this one, this elephant here is just a logo that I saw one day and I liked. And my friend was like, ‘Pilar, you are not a piece of paper! This is your skin!’ But I don’t care. This is a fortune cat. This one says, “I am the resurrection and the life, those who believe in me will live, even though they die.” It’s for my grandmother. This is a bicycle — I love bicycles. I have a fixed gear in Thailand, I love to ride around Thailand and crash around cars. This is my cat who died. This is a guy bleeding from his eye…

WWD: Are your tattoos generally well-received amongst people in the industry?
P.M.: Sometimes casting agents like my tattoos, but they can’t work with me because of my look, if maybe it’s an elegant show or something. I have so many more ideas in my mind, but I think that, for now, I have to keep it simple. And as soon as I can I will get more.

WWD: What do you think you’d be doing, if not modeling?
P.M.: When I was in Chile, I was studying fashion design, but I stopped because I went to Germany. I like drawing. I’m so chill, but I’m so impulsive at the same time. I have so many ideas in my head. Tomorrow I might want to be a lawyer. Then maybe I’d want to be homeless. At least I have ideas.

WWD: Any dreams you’d like to achieve in the business?
P.M.: Since I was very young I saw Marie Claire as a big magazine. And I just went to work for a shoot for Marie Claire in Barbados. It was amazing. The people there are so nice. And the team, the crew, they were really easy to work with. You know, I would like to do a campaign for Dolce & Gabbana, stuff like that. But I don’t die for it, you know? If I can, I can. Otherwise it will be fine. I just want to work as long as I can. I just want to have a happy life. I would like to go back to Thailand, have my own place, get another cat and just live peacefully.

WWD: What’s the weirdest thing you’ve had to do on a photo shoot?
P.M.: For a Korean client, we stayed in the studio once for eight hours, with eight outfit changes. They said, ‘Take this pen, you’re going look happy, confused, sad, mad.’ And then I had to repeat the same thing with a phone, a bag, constantly changing [my expression]. It was like acting. And then sometimes you find a photographer that will say, ‘I want you to be very sexy, but fresh like a flower.’ OK, so…what do you want exactly?

WWD: What do you think you’ve gained the most from all your modeling experiences?
P.M.: Traveling, learning about other cultures, religions, and meeting so many people. I learned to speak a little Thai, English and, of course, Spanish. I would love to learn Japanese and German. You grow up a lot. Of course I feel alone sometimes. All my family is in Venezuela. I don’t have a boyfriend, and when you go back home you just want somebody to wait for you. But I feel strong. Independiente. You grow up a lot and you learn. That’s what I get from modeling….And some pictures to show my family when I’m old.