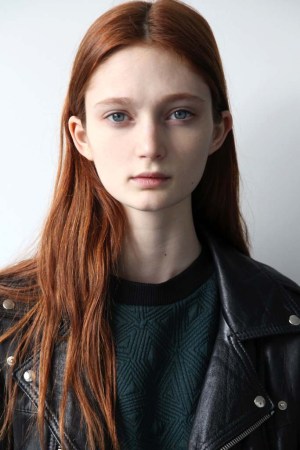 There’s a hot new redhead in town. Sophie Touchet, repped by The Society, just finished a whirlwind debut season wherein she walked a whopping 43 shows — including Chanel, Lanvin, Rag & Bone and Alexander McQueen. She was even recognized on her home turf during the recently held Toronto Fashion Week, where she opened two shows. “I got backstage and some people were whispering, like, ‘Oh look, it’s Sophie,’ and I was like, ‘Oh my God!’” she said. “It’s so weird.”

Though it’s hard to believe that Touchet is such a runway newbie, life looked pretty different for the 19-year-old French Canadian a mere three months ago. “I was in Gatineau working in a Best Buy, waiting for September to go to university. My plans have change [sic], actually,” she laughed. (Aside from a rather endearing mix-up of past and present tenses, her French-tinged English is near perfect.)

Touchet, who is featured in the April issue of Vogue Germany, is currently living in a model apartment in Manhattan’s Financial District. She sat down with WWD to reminisce about the fall shows, meeting Karl and her grandmother’s reaction to her runway photos.

WWD: How did you start modeling?
Sophie Touchet: I started modeling three months ago. Everything happened so fast. Even now, I can’t believe what’s happening to me. I did a shooting [sic] once with a photographer and we became friends. And we shot a couple times and he told me, “You really should find an agency and do something…” So we talk to Chantale, my mother agency in Toronto, and they were like, “You should go to New York and try fashion week there.” And then I went to New York, and then I went to Europe.

WWD: Are you going to put school on hold for now?
S.T.: I want to go to university after, for sure. But I love to modeling so much [sic]. I think I’m just gonna do that as long as I can. You cannot be too old to go to university. At least I finished high school and CEGEP [Collège d’enseignement général et professionnel]. We have this thing in Quebec between high school and university, you go to CEGEP for two years. I was studying visual art — drawing and photography. I was doing photography at school, and now it’s like reversed, but it’s nice to have been on both sides of the camera.

WWD: Growing up, did you ever get attention for the way you look?
S.T.: When I was younger, during high school, I was doing gymnastics and I was really small. I was, like, only 5 feet tall, but then at 16 I started growing really fast, taller than all my friends. [Note: She’s 5 feet, 11.5 inches now.] Everybody used to be like, “You should be a model, you’re so tall and so skinny.” I thought about it, but at the time I was like, where would I even start?

WWD: What do your friends from home think about your new career?
S.T.: I have this friend ­— she’s, like, dying for Alexander McQueen. I mean, she has his face and name tattooed on her leg. She’s crazy about him. And when I told her I was doing the show, she almost cried. She was so happy. They can’t believe I’m there, you know? I’m going back home and I told them my adventures and they were like, “No way. It can’t be real.”

WWD: What’s it like living in the model apartment?
S.T.: First I was so scared because you know the stereotypes of all the models, how they’re all mean to each other. You see “America’s Next Top Model” and it’s just, like, the worst place to live it seems, in that model apartment. But now I have so many friends from everywhere in the world. You can learn so much from everyone because everyone is coming from a different place. I couldn’t believe I was doing the same shows as Jourdan Dunn and Cara Delevingne.

WWD: Do you ever miss home?
S.T.: I’m here for a while, but I miss my friends and boyfriend. I’m going to Montreal for a job soon, so that’s good. [My boyfriend] is so happy for me. It’s hard to be so far away for so long. He’s at university studying engineering, for computers and apps, it’s so complicated. So he cannot really come with me. But I can’t imagine [how hard it is for] the girls from Europe, they can’t just go home for the weekend [like I can].

WWD: Were you familiar with the fashion world at all before you started modeling?
S.T.: No, no. When I arrived for New York Fashion Week, I didn’t even know we had to do castings. Of course I knew Prada and all these big brands, but I didn’t know any stylists. I was the worst. I was at the model apartment and I was like, “Oh girls, I’ve been booked for this show. Is it any good?” [And it would be this major show] and they were like, “Oh, shut up, Sophie. It’s a good show, trust us.”

WWD: How did you perfect your walk?
S.T.: I’m so tall that in my life, even for going out, I never wear heels. All my friends would wear high heels, but even in their heels, they were all smaller than me. My modeling agent was like, “You will have to learn to walk.” She bought me these huge Prada boots, and she said, “If you can walk in these, you can walk in any shoe.” It was so hard in the beginning, but I got it really quickly. I was so impressed with myself.

WWD: What was your craziest makeup or hair look of the runway season?
S.T.: I had to arrive seven hours before the Alexander McQueen show. It was really something. They had to bleach our eyebrows, and just doing the braids, it was so hurting [sic]. It was so tight. The hairdressers took the braids out for us, and afterwards they gave us a head massage.

WWD: How did your family react to seeing you on all the runways?
S.T.: It’s so funny because when you talk to people who are not into fashion, they’re like, “It’s so weird what you are wearing.” But I’m like, it’s not wearable on the street — you have to see it like a piece of art! But yeah, sometimes people don’t get it. I remember at the Richard Nicoll show, I was wearing a red coat, really warm. And my grandmother wrote on Facebook, “Oh, it’s the perfect coat for the London weather!” She didn’t realize [it was only for the show]. It’s so cute.

WWD: What’s on your bucket list?
S.T.: So many things, oh my God. Before, I used to have a plan for my life. I thought, I am going to go to school, then university, then I’m going to get married, then I’m going to have children. And now it’s just like, I go with the flow. I want to try everything. Traveling is good for you — you learn so much just being somewhere by yourself. Oh, and I want to jump with a parachute. How do you call it? Skydiving.