The Oklahoma City Thunder point guard held court on the eighth floor of Barneys New York Tuesday night to unveil his collaboration with the store. 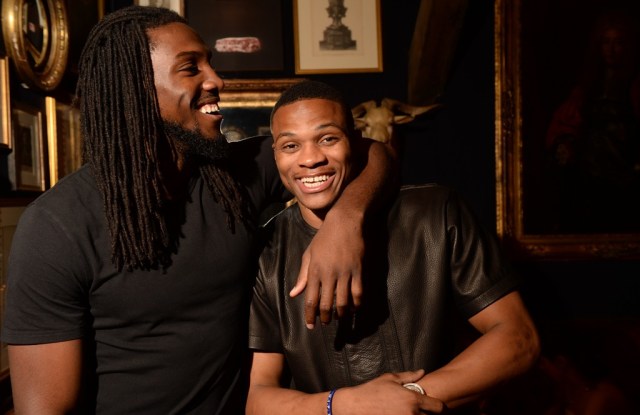 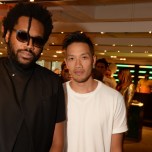 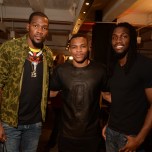 Russell Westbrook and Kevin Durant were not in Oklahoma City anymore. They were on the eighth floor of Barneys New York, which looked like a pep rally. Westbrook, the Oklahoma City Thunder point guard, was mobbed by fans who had come out of the woodwork for the unveiling of his namesake limited-edition collection with the store. Durant, the Thunder forward, was approached by fans too for the occasional selfie, but mainly he aimlessly browsed the racks. This was not his arena.

“Russell’s the most fashionable guy in the league in my opinion,” Durant said. “I’m minor leagues compared to him.”

This story first appeared in the August 22, 2014 issue of WWD. Subscribe Today.

It was a role reversal for the two star players.

In the NBA, Westbrook is seen as one of its most erratic talents, capable of brilliant feats but also embarrassing blunders. Durant is widely considered the heir to LeBron James as the league’s next best player. Last season, he was declared most valuable player after he steam-rolled opponents in the playoffs to reach the conference finals, where he met the San Antonio Spurs’ buzz saw; the Spurs eventually beat James’ Miami Heat for the championship. Along the way, Durant picked up four Sports Illustrated covers, one featuring this quote: “I’ve been second my whole life.…I’m done with it.”

Fashion is not an area where he has an overwhelming urge to crush the competition, though. He’s comfortable letting Westbrook take the lead there.

“I’m really not big on fashion,” Durant said. “I like to come to things like this just to get some ideas, learn some new stuff. It’s cool being here supporting Russell, that’s all I’m here for.”

At one point, Durant came up to Westbrook while the designer manqué was fielding questions from fans — Durant wanted to know if he could actually, you know, shop.

“He wants to buy some of my stuff,” Westbrook said.

Westbrook has been the face of Nike Jordan for the past three years, but recently, he’s taken his place in the front row as one of the NBA’s premier peacocks alongside Carmelo Anthony and Amar’e Stoudemire — and the fashion world has embraced him back.

During the men’s spring shows, Westbrook attended Rick Owens, Comme des Garçons, Saint Laurent and Givenchy and the first of Barneys’ dinners to toast their collaboration. “That was my first time in Paris and to go out there for fashion week was even better,” he said. “It was far [from Oklahoma City] but it was a good experience for me.”

For Durant and Westbrook, the shopping spree at Barneys was a pit stop on the way to the upcoming season — they’ll face Faried and the Nuggets in their first preseason game on Oct. 8 (though Westbrook will be back for New York Fashion Week). They’ve already been training for around two months.

“I train every morning,” said Westbrook, whose knees have shown improvement since he underwent several surgeries in the last year. “That’s my first job.”

In a summer of many high profile moves in the NBA, most notably James’ homecoming to the Cleveland Cavaliers, there was an upside for teams like the Thunder. How was Westbrook feeling going into the new season?

“I hope we can do good,” he said. “My job is to come in and try to get better and better and hopefully we can do better.” It doesn’t matter what team James is playing for, the hyper-competitive Westbrook said, “Same goal in mind.”