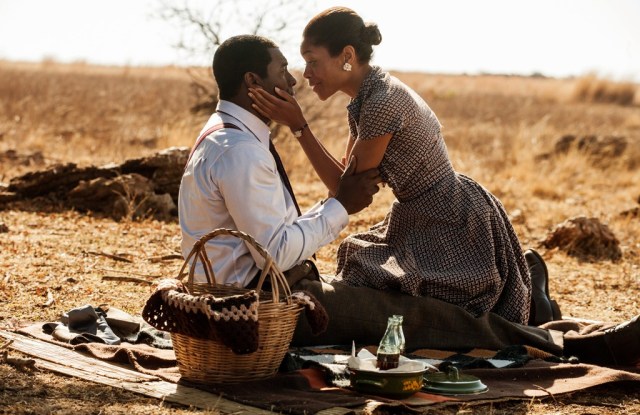 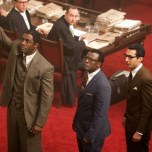 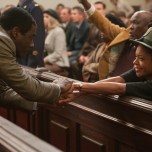 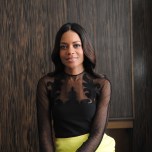 Meeting Naomie Harris for the first time after seeing her new film, “Mandela: Long Walk to Freedom,” directed by Justin Chadwick, is a little intimidating. After all, her character of Nelson Mandela’s wife Winnie becomes a revolutionary firebrand who hates the government, believes in achieving freedom through violence and executes party members she suspects of being spies by viciously “necklacing” them with tires full of gasoline set afire. Harris’ character in the film, which will open in New York and Los Angeles on Friday, undergoes a remarkable series of changes. She morphs from well-brought up, well-educated, pretty young lady who is a social worker — dressed carefully in stylish late Fifties-early Sixties suits, dresses and hats — to radicalized party leader wearing camouflage.

The change happens largely because of the harassment and cruelty the regime shows her as a proxy for her husband, who was in prison on isolated Robben Island at the time, an environment that was re-created in the studio. Harris handles the changes in the character with great skill, and it seems likely that she will be nominated for an Oscar.

However, Harris is nothing like Winnie Mandela, at least the one at the end of the film. In person, she is an elegant beauty and highly articulate. Harris, who is British, went to St. Marylebone School and received a social and political sciences degree from Cambridge University. After graduation, she began studying acting at Bristol Old Vic Theatre School.

Her credits include the science-fiction TV series “The Tomorrow People,” the film “28 Days Later” and the TV adaptation of Zadie Smith’s “White Teeth.” She was the first black actress to play Eve Moneypenny in the James Bond movies. It was her role in the film “The First Grader,” directed by Chadwick, that helped her land the part in “Mandela.” In “The First Grader,” Harris is a schoolteacher teaching a class of students in Kenya, something she actually did during the film.

“I had no idea she was so controversial,” says Harris of Winnie. The actress, who is 37, goes from being a woman in her 20s to one in her late-50s in the film, and the makeup that ages her is handled with considerable subtlety, something that’s not always the case in the movies. Harris says that stronger maquillage was tried, but didn’t work. She received a lot of advice about playing Winnie, and everybody had an opinion about her, but then she met the woman herself, who said, “All I am going to ask is that you portray me faithfully.”

Harris says that this statement freed her, enabling her to “take ownership of the part.” The political leader later said that she felt that Harris was the only actress who has “truly captured” her. “She had a really, really tough time,” Harris says. She was frequently interrogated or arrested, spending one long stretch in solitary confinement, and any employer who gave her a job received an intimidating visit from security forces, which meant that she would be fired.

Harris enjoyed working with Idris Elba, who plays Nelson Mandela. “He is very good at diving into the darkest possible places but also having moments of lightness,” she says.

Chadwick, for his part, praises Harris for playing a “personal and flawed” character, and says that he was impressed by her behavior and performance on the set of “The First Grader,” too. “We were living in this very basic environment,” he says. But she took it in stride.

Harris lives in London near her family, to whom she is very close. As for her career, “I never had a plan,” she says. “I always just wanted to do great work.” Thus far, the serendipitous route seems to be unfolding just fine.