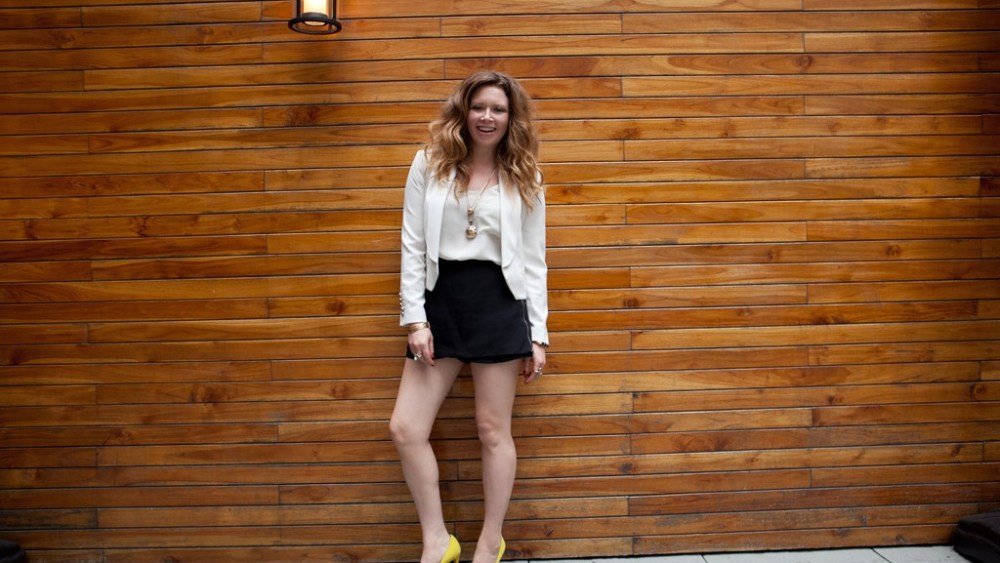 “I really just want to be a role model for the children,” Natasha Lyonne smirks, a cloud of cigarette smoke billowing out of her nostrils. She’s perched on an olive cushion resting atop a banquette at Aretsky’s Patroon’s rooftop in Midtown Manhattan. Unlike the rest of the patrons here, the now-sober Lyonne sips on an iced coffee between drags. “I don’t drink anymore, but I have that hungover feeling from being out late. It was a big night.”

The previous evening, she joined cast mates at the New York Botanical Garden in the Bronx to premiere their new Netflix original series, “Orange Is the New Black.” “This is how like a teenager must feel on the regular,” she groans.

Lyonne, by her own admission, used to feel like this herself on the regular.

With a Hollywood career that began to take off in the late Nineties: first with “Slums of Beverly Hills,” then the megahit “American Pie” and its sequels, Lyonne’s ascent was punctuated in the mid-Aughts with a Gawker-ready spate of arrests, a much publicized eviction and a stay in New York’s Bellevue Hospital.

Now 34, Lyonne is on the other side of the coin. She is sober and very together and starring in a series set in the slammer.

Based on the best-selling memoir of the same name by Piper Kerman, “Orange Is the New Black” is a dark comedy, making its debut Thursday, from Jenji Kohan (the show runner behind Showtime’s “Weeds”) centering on a thirtysomething, Piper Chapman, who is suddenly thrust from her comfortable life with her fiancé in Brooklyn into an all-women’s prison to serve a 15-month sentence for her involvement in a drug-smuggling ring. Piper is the consummate fish-out-of-water, a farmer’s market-frequenting Brooklynite who has her own line of bath products that was recently sold to Barneys New York. When given her jailhouse footwear while checking into prison, she exclaims, “Hey! These are kind of like Toms!”

But navigating the jailhouse milieu isn’t as treacherous as it sounds. “This isn’t ‘Oz,’” Piper’s counselor tells her flatly on her first day in the joint. “Women fight with gossip and rumors.” Instead of finding razor-blade-wielding assassins, this prison is peopled by a jumble of crafty female offenders; among them, a former nun, a pacifist yoga master and a transvestite who curries favor with fellow inmates by teasing their hair. Cue Piper’s cell mate Nicky Nichols, a brassy former heroin junkie jailed on a drug-related incident, played startlingly on-the-nose by Lyonne.

The show is sardonic, something that appeals to Lyonne’s own penchant for morose humor. Needless to say, Lyonne sees the irony in it all.

“I mean, as you know, I’ve had some wear and tear in this life, but I know that even in the most graphic and painful of circumstances, inevitably there’s humor,” she says, running her hands through her mane of auburn hair, still perfectly tousled from the night before. “It’s just a reality of life, so I actually digested the script as being in line with my own sensibility.”

The part came her way via Kohan — or “a f–king female pioneering genius,” as the actress terms her — when Lyonne had a bit part in the “Weeds” finale. “I read the script while on the set of ‘Weeds’ and I was thinking, ‘Holy f–k, I’ve got to get on this show.’ I felt really determined.”

The actress was concerned, though, her “Weeds” role would be distracting for Kohan. “I was playing this like Jersey Shore-esqe girl with shellacked hair and an orange spray tan. I’m sitting there in the trailer wearing a tight leopard-print velour dress, and I’m thinking, ‘I hope they can still think of me as this rubbed-raw prisoner,’” she says. “Luckily, I think, in this case, my reputation precedes me. I don’t think it’s that much of a stretch for anyone to picture it.”

Lyonne doesn’t shirk her textured past nor the glaring parallels between Nicky’s own drug-fueled legal scrapes and her own. Without rattling off her rap sheet, Lyonne speaks candidly to how her exhaustive, tabloid-documented odyssey lent itself to the role. “I mean, I can relate to this character,” she says. It’s a trope often utilized by actors, but rarely does it ring this true. Much like Lyonne, Nicky is no shirking violet. She’s sharp as a tack, delivering tart one-liners with the same pithy ease that Lyonne does. Of her other two cell mates — a woman living off an oxygen tank and a neat freak — Nicky cracks dryly, “How much longer are they going to keep me in here with Darth Vader and Mr. Clean?”

But Lyonne is quick to acknowledge Nicky’s dimension and the depth of feeling masked by that off-the-cuff witticism. “In those reservoirs of pain that come with being that self-destructive, also comes this buoyancy and survival that comes from what it’s like to come out on the other side. I feel lucky to be able to inform the character with that degree of honesty. I think for a lot of actors playing the role of an addict, there’s a tendency to overplay the hand and play that part as a victim of circumstance of substance abuse, and I wanted to play Nicky as just another human being,” she lurches forward to extinguish her cigarette in the ashtray. “You know, at the end of the day we’re all just another bozo on the bus.”