Andrew Lycett's new book delves into the biography of the author that created James Bond. 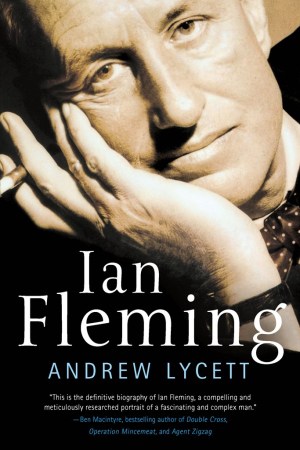 It may be the most famous personal introduction in a novel: “Bond. James Bond.” Now there’s “Ian Fleming” (St. Martin’s Press), a new biography of the creator of that character by British biographer Andrew Lycett. Asked why he decided to write it, Lycett said, “Well, basically, he seemed a very interesting chap to sort of grapple with. He is the only begetter of probably one of the two or three biggest-selling series of novels that we have seen. But he was very little-known himself. There was a sense that there was a kind of back history there.

“I had access to some interesting personal letters,” Lycett says. “I contacted the family of Ian Fleming, and then it spread out to some other people who were still alive.”

In addition, Lycett says, some new documents had recently become available that covered Fleming’s service as an intelligence officer during World War II and that were germane to the book. Before the war, Fleming had gone from one job to the next, including writing for Reuters. “The war was very much his making,” Lycett says.

“[FBI head J. Edgar] Hoover was not very keen on British agents working on American soil,” Lycett notes. And then there was what he calls “a very strange isolationist lobby” in the U.S. “But Fleming had contact with the liaison guy called Bill Donovan. He went over to work with him in 1941. Fleming was asked to produce a blueprint for the OSS and the CIA and to say what kind of man would make a good OSS officer, and the result was not very different from James Bond.

“When he was in the Admiralty meeting all these agents, he told a colleague in naval intelligence that he wanted to write the spy novel to end all spy novels,” Lycett says. Fleming once compared writing to making salad dressing, putting in all the right spices.

The writer himself was “a dashing man,” Lycett says. “He’d had a very exciting life, he was a handsome, good-looking chap who enjoyed life, and he had a lot of girlfriends. He was very good at golf.”

Fleming and his famous character, whom he launched with “Casino Royale” in 1953, shared this skill and both also loved to gamble, liked fast cars, beautiful women, scrambled eggs and Jamaica. Fleming built a house there, near that of his friend Noel Coward, a place he named Goldeneye after a naval intelligence operation in Spain during World War II.

“He was kind of his alter ego,” Lycett adds. “Bond is somebody that men — and a surprising number of women — want to be.” Besides Fleming himself, Bond was based partly on singer Hoagy Carmichael, at least in terms of his appearance.

“He was a very good journalist,” Lycett says of Fleming. “That grounding was quite important — he knew how to write pithy copy. He was a man of some imagination, there’s no doubt about that. At school, he edited a kind of literary magazine. His literary mother was a well-known society figure, and she got her friends to write things for it.

“His wife Ann was quite a stimulus to him,” he adds. “She had a lot of literary friends — Evelyn Waugh, Patrick Leigh Fermor, Cyril Connolly and Coward.” One of his other romances was with Blanche Blackwell, who was from a prominent Jamaican family and became the mother of Island Records founder Chris Blackwell. Lycett offers an additional salient observation: “He was one of the first novelists to start writing about brand names” — from Tiptree jams to Aston-Martins. Surprisingly, further Bond novels are still being produced, most recently by William Boyd. Lycett observes that the Bond movies have been very good at keeping up with technology, which has been one of their trademarks from the beginning.

Lycett is quite well-versed in detectives. This book was originally published in England in 1995, and since then he has written about Arthur Conan Doyle. His latest subject is the writer Wilkie Collins, whose book “The Moonstone” is regarded as the first detective story in the English language. “He was an opium addict,” says Lycett of Collins, “and he also had two families, and he wasn’t married to either of the women.

“The kind of books I do are getting more difficult,” the author adds. “Nonfiction requires quite a lot of research if you’re going to do it properly. Industry advances are not as good as they were. But you could say that’s why there is an interest in these characters who have proven saleability, such as James Bond.”