Kristen Stewart, Rob Pattinson and more "New Moon" stars stepped out on the red carpet for the New York premiere. 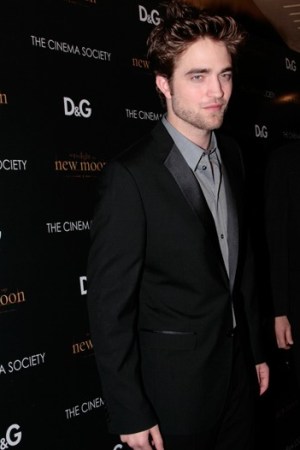 The security detail on Houston Street Thursday evening was enough to suggest a visiting dignitary. Police barricades filtered pedestrian traffic; suited men with earpieces roamed about, and you practically needed a birth certificate to enter the Landmark Sunshine Theater.

“This is crazy,” said one photographer. “It’s like you’re going to meet the Pope!”

It was an arguably religious experience for some: The D&G-sponsored Cinema Society screening of “The Twilight Saga: New Moon” was attended by its vigilantly followed team of actors. Though the teenage fans lining the streets outside the theater seemed relatively subdued, inside, the cast confessed to many an odd run-in.

“I just had a man’s wife propose to me for him even though they’re married,” laughed Ashley Greene. “And I was like, ‘Are you joking?’ And she was like, ‘No he really loves you.’ And I was like, ‘So you don’t want him anymore?’”

“The weirdest thing is just when people start crying,” said Kristen Stewart. “I’m just like, ‘No, don’t do that. It’s all good.’”

“Today, I was with Rob and I pretty much got tackled,” said Kellan Lutz. “And another fan wanted to lick my face.”

Robert Pattinson, the much-longed-for man of the hour was calm, but reticent.

Has dealing with those lovelorn girls gotten any easier?

How does he handle being a sex symbol?

But perhaps the biggest testament to the Pattinson effect was the sheer number of tiny tweens racing around the theater and, a bit disconcertingly, The Box, site of the after party. As Joan Jett, Ed Westwick, Michelle Buswell and Elizabeth Reaser hung out in the second-floor wings, one guest expressed some concern. “There were a couple of girls sitting on the stage where [performers] normally stick things up their fannies,” he said. “That’s just wrong.”