On the Road With Danh Vo

The artist is in Manhattan for Friday’s opening of his “I M U U R 2” exhibition at the Guggenheim. 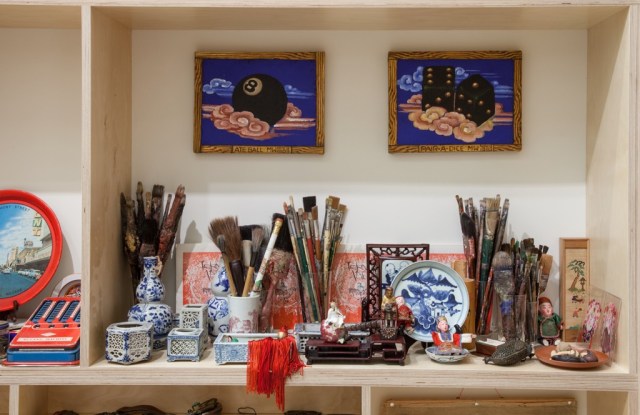 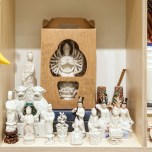 In Manhattan for Friday’s opening of his “I M U U R 2” exhibition at the Guggenheim, Danh Vo has been relishing his extended stay in Manhattan. A few years back, the 2012 Hugo Boss Prize winner decided to give up his Berlin apartment to travel wherever his work would take him.

His installation is meant to stir up latent connotations and memories embedded in familiar forms. If that alone isn’t enough of a brainteaser, the title borrows from the artist Martin Wong, whose business cards were stamped with I M U U R 2. Vo became so intrigued by the late painter’s work and near-obsessive collections that he struck up a friendship with Wong’s mother. The mother-son team collected so many pieces of Americana and souvenirs that nearly every surface in the house they shared was covered. Vo, who visited Florence Wong Fie in San Francisco en route to New York, drew from the Wong collection for his Guggenheim extravaganza. In the past three months, the Vietnamese-born artist also touched down in Rome, Portugal; and Basel, Switzerland.

His seemingly endless road trip lifestyle is actually well-suited for his work. After catching up with Fie on the West Coast, he flew to Memphis and then to drove to New York, making pit stops in New Orleans and at various places along the Florida coast. The National Museum of the Marine Corps in Triangle, Va., was the highlight of his cross-country trip though he abstained from buying any souvenirs along the way. “I love to see very patriotic places,” Vo explained. “Sometimes I take these road trips just to see something new, not to buy mementos.”

During his nearly monthlong stay, he has been bunking at his art dealer Marian Goodman’s uptown apartment. Now that most of his prep work at the Guggenheim is done, Vo hopes to buzz by the Whitney Museum of Art and shop all day Saturday. “New York always feels a bit like home so I don’t feel like I need to rush around seeing things,” he said.

And now that his father, (who like Vo was treated to a Hugo Boss suit for Monday’s Hugo Boss Prize opening reception,) and his mother are in New York, Vo is presumably more at home. “My mother stays uptown in an apartment. She makes lunch everyday and brings it to the gallery,” he said.

After leaving New York, Vo will head to Paris to prepare for the opening of his show at The Musée d’Art Moderne de la Ville de Paris. He will also spend some time in Venice this spring, getting things in order for his input for Massimiliano Gioni’s “The Encyclopedic Palace” at the Venice Biennale. Don’t count on his staking roots any time soon. “My plan is to do this as long as I don’t have the feeling of being settled down. Because one day you will always settle down,” he said.