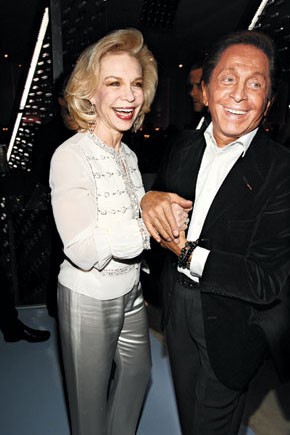 For someone who says he doesn’t like to go out much, Valentino is sure making the rounds while he’s in New York. Tuesday night was dinner at Diane von Furstenberg’s, where guests came decked out in their finest not-quite-black-tie attire. Iman was adorned in a red frock courtesy of the Italian designer, while Anh Duong looked smashing in a black cocktail dress from YSL. Even Barry Diller wore a tie. “The only reason I wore one is because I’ve never seen Valentino without one,” he said during a toast to the designer just before dinner.

Apparently, there’s a first time for everything, including Valentino going a bit more casual. “It’s my first night since this summer without a tie and I feel very uncomfortable,” he said apologetically, before turning to a guest on his left. “Can you give me your tie?”