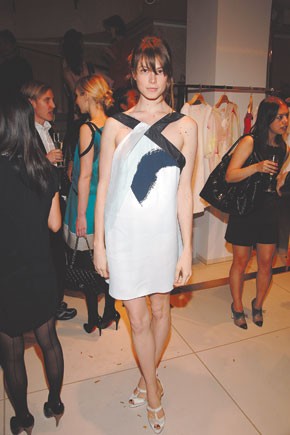 In a flashback to days gone by, the well-preserved, well-dressed set turned out for the opening night of “Nancy Reagan — A First Lady’s Style” at the Ronald Reagan Presidential Library in Simi Valley, Calif., Thursday night. “She put American fashion on an international level,” said master of ceremonies Diane Von Furstenberg. Among those who made the 50-mile trek from Los Angeles were Reagan’s pals Betsy Bloomingdale, Kenneth Jay Lane and Fred Hayman. “Tonight is so reminiscent of the Eighties, which was a special time, another era,” said Bloomingdale wistfully. “Today we live in a blue jeans era — not that I don’t wear them to go to the hairdresser.”

Most of the clothes on display were by James Galanos, and were on loan straight from Reagan’s closet. “I’m out of fashion now, but it’s nice to be remembered,” Galanos said.

As she gazed at the exhibit, the former first lady remarked, “Tonight was a big thrill for me. There’s lots of great stuff in there.”

Meanwhile, in New York, master auctioneer Simon de Pury whipped the crowd into a frenzy at the Guggenheim International gala over a series of donated artworks from Catherine Opie, Jenny Holzer and Richard Prince, among others. Much to the amusement of onlookers like Stephanie Seymour, Samantha Rosen and a bearded Owen Wilson (who came with dealer Tony Shafrazi), de Pury ran around the room haranguing bidders. His methods worked: the auction raised $2.3 million, bringing the institution’s take up to $4.4 million for the evening.

A few blocks away, Richard Chai showed his spring collection at Bergdorf Goodman. Meanwhile, socials including Marina Rust Connor, Tory Burch and Anne Grauso were dining at Marjorie Gubelmann’s home before they made an extremely cursory stop at the Metropolitan Museum of Art’s Apollo Circle Benefit, which they chaired. The flashing lights, pounding dance floor and pulsing crowds in the Temple of Dendur left the ladies quaking, and then fleeing, in their stilettos.

“This is for the young people, I guess,” said Carolina Herrera, the evening’s co-sponsor, as she surveyed the surroundings. “I think I’m the oldest person here.” (The Apollo Circle is intended for those age 21 to 39.)

Photographer Larry Fink was happy to snap the antics of the junior folk for a montage that was later projected on the walls. Unfortunately, most were too young to recognize the 66-year-old shutterbug. “I’m a world famous photographer,” snapped Fink to a clueless blonde trying to chat him up. “My name is on the invitation.”

The night before, Helena Christensen played DJ at the reopening party for the Chloé boutique on Madison Avenue. Ryan McGinness created a pin-bedecked dress with the house which will be auctioned off at the Chloé-sponsored Guggenheim Artists’ Ball. But his fashion savvy could use a little work. “They had to tell me who ‘Chloé’ is,” he admitted.