One on One With Avicii

The 23-year-old Stockholm native, one of the world’s most popular DJs and an emerging production talent, is a busy man these days. 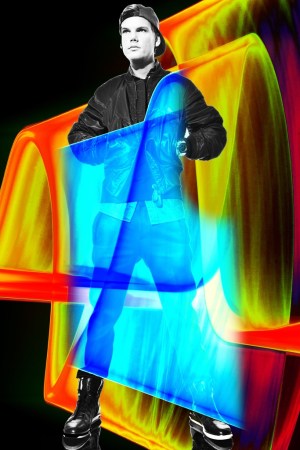 The big black luxury SUV is somewhere between its departure from the photo shoot and the entrance to the Holland Tunnel when Avicii and his tour manager realize that the trunk is open. It’s a warm October Sunday afternoon in Manhattan’s Meatpacking District. The street is mostly empty now, but it is not hard to imagine it packed with club goers navigating its cobblestones in search of a cab home 12 hours earlier. The truck pulls to a stop, unbothered.

After a few moments of inspection, the driver slams the back door home. Avicii, a 23-year-old Stockholm native, whose given name is Tim Bergling and who has slightly alien cheekbones and pale skin that make him a fashion editor’s dream, gives a nervous exhale.

“Yeaaaaah,” he says in the accented English of his native Sweden, which adds a faint “J” sound to the word. “That woulda sucked for sure.”

Bergling, one of the world’s most popular DJs and an emerging production talent, is a busy man these days. He is among the vanguard of musicians loosely banded together under the banner of electronic dance music, or EDM, a catchall term for a litany of subgenres (such as late model house and dubstep) that crank out the big throbby digital anthems currently popular among the adolescent and college sets, and with those charged with marketing everything from luxury coupes to their operating systems. Bergling’s original single, “Levels,” released in late 2011, is one of the surest and viscerally pleasing anthems to come out of the scene, and he has played about 300 shows in each of the last several years.

Which is all to say, if the small collection of bags that contained his touring gear — most importantly his computer and hard drives — had happened to spill out undetected onto a lower Manhattan street, his itinerary would have been thrown into disarray. Two nights earlier, Bergling had played to 50,000 fans at the Austin City Limits Festival in Texas. In early September, he opened at a series of shows for Madonna at Yankee Stadium. In September, he sold out two consecutive nights at Radio City Music Hall. Press materials at the time proudly declared that it was the first time an EDM act headlined the storied venue.

“I’m just travelling around with a USB stick and headphones, like I can have two, three shows in one day if I want to, and I have,” he said.

Bergling’s ascent has correlated pretty neatly with the rise of EDM in America. At one of the Radio City shows, it was easy to read the appeal. The crowd, made up mostly of New York-area kids in their teens and early 20s, was a dancing mess of tennis ball-bright tones, face paint, torsos and glow sticks. Bergling’s set consists mostly of big hits from his electronic forbearers such as Swedish House Mafia and David Guetta, pleasure-center-targeting classic rock samples and lots and lots of crescendo.

“The experience of going to an EDM show or house show is something that turns on a lot of people to house music, the kind of unity and energy of the crowd, you know I’ve been to all different kinds of concerts like from rock to hip-hop and you don’t get that at any other genre,” Bergling muses as his car makes its way to North Jersey. “Not even close to the energy level and unity and it’s different, you can get similar to what it’s like with really hard rock bands, but then it’s more aggressive.”

Surely the scene around such shows adds to the appeal. While in the concession line during Avicii’s set, a young man approached another concertgoer asking if he had any molly, the preferred slang for the drug MDMA in such circles. When he explained he had none, he turned to two teenage boys behind him in line. The pair sadly informed him that they had just asked him the same thing in the bathroom. Bergling, for his part, said he shies away from the chemically enabled side of the scene.

Extracurricular activities aside, Bergling holds a unique appeal among his EDM contemporaries. While some peers favor style cues from the rock star playbook such as oversize masks and asymetric haircuts, Bergling prefers a simple post-college style: jeans, untucked button down, backwards hat. His unassuming style surely had a hand in his gig fronting campaigns for Ralph Lauren’s Denim & Supply line this fall. Staring at him atop the giant head from which he DJ’d on his latest tour, and upon which was projected a very impressive light show, he could have been any one of the kids doing their best to dance in between Radio City’s rows. It is actually a fitting uniform in the barrier-to-entry-low world of EDM.

His presentation seemed to suggest that, with the right memory stick and a good enough ear, any of you kids could be him. And not so long ago, he was a kid in Stockholm studying the work of his own heroes like Swedish House Mafia.

“I always had wanted to make music and I always had melodies in my head, but I can’t sing and I can’t play guitar. I wasn’t that good,” he said as the SUV moves through North Jersey. “I wasn’t seriously thinking that I was going to be a guitar player in a band or anything, but this was an actual possibility.”

A short while later, the car arrives at the terminal curb. Bergling pops out and is through the glass doors for a flight back to Stockholm. And then one to Dubai. And after that another to Kiev, Ukraine, bags and memory sticks in tow.