After the deep freeze and whiteout at the Golden Globes, warmth and color returned in time for the 13th Annual Screen Actors Guild Awards. 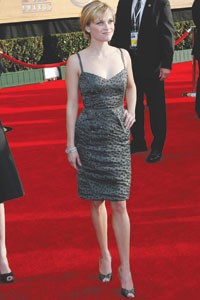 LOS ANGELES — After the deep freeze and whiteout at the Golden Globes, warmth and color returned in time for the 13th Annual Screen Actors Guild Awards at the Shrine Auditorium on Sunday. Actresses paraded the red carpet in a cornucopia of shades — from bold brights, like Demi Moore in royal blue Alberta Ferretti and Joy Bryant‘s fire-engine red Valentino, to sophisticated darks, such as the steel blue Nina Ricci cocktail number worn by Reese Witherspoon and Ellen Pompeo‘s indigo Lanvin column. Jada Pinkett Smith, in hot pink, definitely got the color memo.

“I felt like I was going to come out with something bold tonight,” she said. “I had this in my closet and I was like, ‘C’mon, it’s vintage Bob Mackie! I’m gonna take a shot!'”

As for hair and makeup, the runways dictated the styles: Pompeo took cues from Lanvin as well as the couture. “I loved the Valentino show last week. It was so clean and spring-like. This is my version.”

This story first appeared in the January 30, 2007 issue of WWD. Subscribe Today.

But, like most men, Kyle MacLachlan seemed unruffled by all the fashion talk going on. “I am here just to sit at the table, eat food and have a good time,” he said. “No pressure there.”