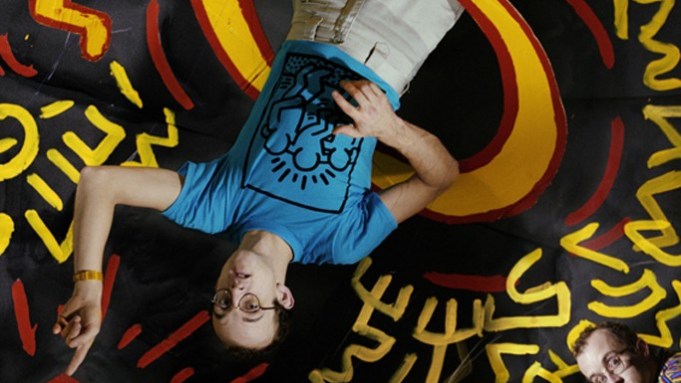 And so it was. The Reading, Pa.-born artist’s first solo show in a museum took place in Bordeaux, France, in 1985, after which he wrote to the city’s Museum of Contemporary Art, saying, “You can keep everything but my brushes. I care about my brushes,” said Odile Burluraux, who researched at the Keith Haring Foundation archives and also met the late artist in person.

“He was very generous and very caring, intelligent in his relationships with people,” said Burluraux, now curator at the Musée d’Art Moderne de la Ville de Paris, which is hosting yet another milestone for the American Pop artist in France. Opening Friday and running simultaneously at the museum and Le Centquatre through Aug. 18, “The Political Line” is one of the most momentous retrospectives of Haring’s work.

“Haring was very keen on Paris, he came often on the Concorde just to go dancing on Saturday and go back on Monday,” Burluraux recounted. “And he would pay for everyone’s tickets too.…It was less common in 1984, but he was really curious about the world.”

The new Paris exhibition showcasing 250 of his works is set to attract “a different public,” according to Burluraux. “We had a Basquiat show three years ago, and it brought us very young visitors, a lot came from the suburbs, it was something we didn’t expect,” she said.

Haring, who died in 1990 of complications related to AIDS, is likely to draw even larger crowds given his wide and enduring popularity.

Burluraux said his oeuvre still appeals to every new generation because of its universal nature: “He stated very early that he wanted to give people access. He studied semiotics and knew that an image could be a word, one that everyone understood. So in a way, he gets what he deserves.”

Once, to celebrate the 200th anniversary of the French Revolution, Haring was commissioned to rework the surface of a zeppelin to fly over Paris. So he painted the word perestroika across the 92-foot-long airship.

“But at the very last minute it was canceled,” Burluraux said. “[Mikhail] Gorbachev was visiting Paris at the same time, and the city did not want to offend him. I later read in Haring’s diary that he was very upset they didn’t tell him why they did that.”

During the first week of the exhibit, Paris’ subway station Alma, which is closest to the museum, will be covered with 11 Haring posters featuring his quotes in homage to the artist’s “subway drawings,” which he conceived in an attempt to take art outside of the museum and make it free for everyone. In concert with the exhibitions, the Paris concept store Colette is staging a pop-up shop, which will run through May 4, though the store’s creative director, Sarah Andelman, prefers to call it “a show on Keith Haring and fashion.” “He used to have a ‘Pop shop’ on Lafayette Street, [and like him] we carry many Keith Haring products in our gallery space, so it’s a kind of ‘Pop-up shop,’ but we don’t announce it this way,” she explained.

Next to iPhone covers, jewelry, toys and sneakers, the space features fashion pieces inspired by the artist’s quirky graphic vocabulary — a dress by Vivienne Westwood, shoes by Nicholas Kirkwood and a Comme des Garçons sweater. The display was assembled by French artist Maripol, who has lived in New York for the past 30 years and “hung out” with Haring. “Keith loved to have things people could afford, hence the Pop shop. That was his vision, that art was for everybody and that art was fun,” she said.

Maripol’s film on Haring, “the activist and humanitarian that he was,” will air on Franco-German TV station Arte on the day of the show’s opening at the Musée d’Art Moderne. About his sudden resurgence, she said: “I don’t think it’s a renaissance, because he never died. But it’s about time he has a bigger recognition. If he could paint the planet he would, he had that kind of energy.”

On trend is also designer Lucien Pellat-Finet’s capsule collection of Haring-inspired cashmere sweaters and cotton T-shirts, with a portion of the proceeds going to the Keith Haring Foundation fighting HIV/AIDS.

A never-shown-before 1982 film by Elinor Vernhes shot with a small camera attached to Haring’s paintbrush can also be viewed at Colette, while a series of portraits taken from American photographer Jeannette Montgomery Barron’s book “Scene” documents the New York underground of the Eighties, featuring Andy Warhol, Cindy Sherman, Katherine Bigelow, Willem Dafoe — and Haring, of course.