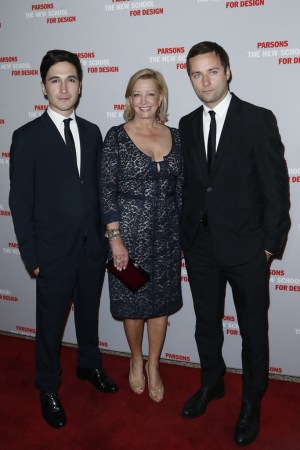 NEW YORK — Most colleges and universities host class reunions on a five-year interval. In the case of the Parsons Fashion Benefit, held Wednesday night at Pier 60 at Chelsea Piers here, it doesn’t matter when someone graduated — alumni can attend annually, as long as they are a working designer and maintain at least a mild amount of relevancy and success, i.e., money to buy a ticket or two. The event raised nearly $1.7 million, which goes directly to Parsons The New School for Design student scholarships.

It’s been 10 years since Vena Cava’s Lisa Mayock graduated; she said she’s attended the benefit almost every year since, noting that she’s also gone to all of her high-school reunions — although not necessarily on the same level of good behavior. “The 10th started out OK, but once everyone started drinking it totally devolved into high school all over again,” she recalled. Fellow Parsons alums in the house included Reed Krakoff, Narciso Rodriguez and Tracy Reese. As the designated alumni speaker, Reese reminded students to “always remember your customer. If you’re lucky, you’ll get a real customer out there who’s going to go into a store and pay a lot of money — or a fair price — to buy your clothing. You learn to honor your customer.”

Kay Unger, class of ’68, was there in her new role as Parsons’ chairman of the board of governors — the first alumnus to hold the post. Also in attendance were Carly Cushnie and Michelle Ochs, and Prabal Gurung, who was the alumni speaker once before. He said he was there “just to support the boys” — said boys being the midthirtysomething designers of Proenza Schouler, Lazaro Hernandez and Jack McCollough, the evening’s co-honorees. Their 10-year was last year — oops! — and if 11 doesn’t have the same ring to it, oh well.

RELATED STORY: Kay Unger Named Chairman of the Board of Governors of Parsons >>

The designers spent the day before the gala sizing up the work of a select group of current graduates, whose designs were featured in a two-part runway show Wednesday night. “We’re bad critics,” said McCollough. “We’re not so cutthroat,” added Hernandez. “I wish I was more witty and funny like Michael Kors. We were sweet and encouraging.” At the end of the evening, the student designers of the year were revealed: Harim Jung and Kaye Applewaite for women’s wear; Yunxiang Sharon Zhou for men’s wear, and Diana Flavio Woodside for children’s wear.

Cathy Horyn, The New York Times’ fashion critic, presented Hernandez and McCollough with their award. She recalled meeting “the boys” at their first presentation at a house on Gramercy Park, following up with them later in their Chinatown studio where she met their young business partner and current chief executive officer Shirley Cook, who “gave me hope,” said Horyn. “You need partners in this business. It’s no joke that some of the most successful fashion labels, the ones we all know, have been the result of partnerships: Yves and Pierre, Calvin Klein and Barry Schwartz, Liz Claiborne and Art Ortenberg, the great Russian modernist Valentina and her husband George Schlee.…So relationships matter and I don’t necessarily mean with the press.”

To her point, Hernandez in his acceptance speech called out how crucial Parsons and its relationships with the industry had been for Proenza. “Our career began this very night 11 years ago,” he said. “It was the night we met the president of the CFDA. He introduced us to Barneys, who then went on to buy our entire senior thesis collection that we showed this night 11 years ago.” In related news, Barneys is working with the designers on a capsule line based on Proenza Schouler’s first collection, coming to its stores and windows in June.

The next honoree to take the podium was Bonnie Brooks, president of Hudson’s Bay Co. While working at the helm of Lane Crawford, she, too, had made the trek to Chinatown to see Hernandez and McCollough’s first collection, which they were steaming in their kitchen. “We were among the very first to buy it, and after years of major success they are still the nicest guys,” said Brooks, who began her speech with a tribute to Marvin Traub, the legendary retailer who died last year. Brooks reminded the room what Traub was about. “He called me one day while I was living in Hong Kong to ask if I would take him to China to tour some of the stores we had opened and visit places he had not seen in 25 years…,” said Brooks. “He was already an octogenarian. In his typical style, it was Marvin who ran us ragged. He had finished not one but two different breakfast meetings before our 8 a.m. start each day.”