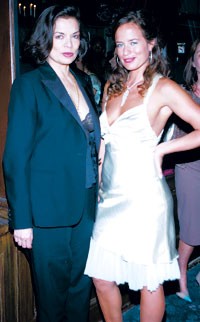 The lions roared, the Jaggers swaggered and the Ladies Who Lunch, well, lunched. A smattering of events last Thursday night split the New York social scene into factions.

The charity set — including Jessica Seinfeld, Muffie Potter Aston and an eight-months-pregnant Malaak Compton-Rock — gathered at the Calvin Klein store for the Safe Horizon kickoff party. Fashion visionaries from Kate Spade to Reed Krakoff took a gander at the “Fashioning Fiction in Photography Since 1990” exhibit at MoMA Queens, sponsored by the CFDA. A glittering group of masked literati (Karenna Gore Schiff, Candace Bushnell and Luke Janklow among them) ventured to the New York Public Library for the Young Lions Black and White Ball, with four guests in attendance who had been at Truman Capote’s original in 1966: WWD’s Aileen Mehle, Dominick Dunne, Kitty Carlisle Hart and Kenneth Jay Lane. And the international jet set (as well as a few uptown girls like Tory Burch, Gigi Mortimer and Jennifer Creel, who’d all been at an Hermès lunch earlier in the day) danced to salsa music to launch Jade Jagger’s jewelry collection for Garrard.

Jagger’s party was by far the most unpolished and off-the-cuff, though that was the intention: “It’s why we chose Ian Schrager’s Gramercy Park Hotel,” Jagger explained, taking a lay of the pre-renovated land before moving up to the private party on the roof. “It’s so grungy here.”

Not every boldfacer was willing to pigeonhole himself into a single category. Gilles Mendel, for instance, who had been mingling with Moby, Amanda Hearst, Chris Noth and Christina Greeven Cuomo at the Black and White Ball changed out of his tux into a tan suit to hang out at Garrard with Sean Penn, Brooke Shields, Iman and Margherita Missoni, who’s now studying acting. And, though Michael Kors kept on his trademark blazer and jeans, he party-hopped like he had Friday off. “I’ve been to three events already,” bragged Kors. “I’ve been all over New York — I’ve even been to Queens.”