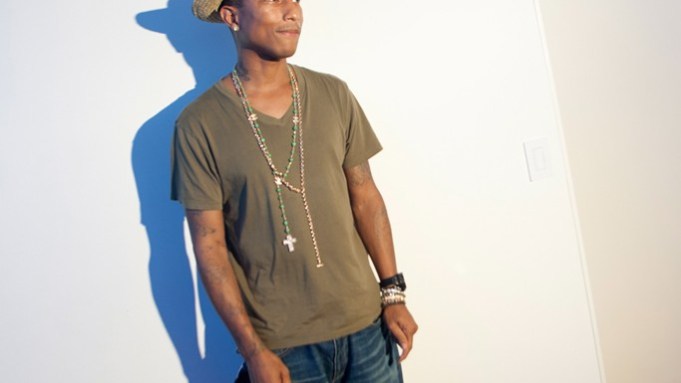 The producer, singer and all-around professional influencer Pharell Williams had a hand in two certified songs of the summer of 2013, Daft Punk’s “Get Lucky” and Robin Thicke’s “Blurred Lines.” Both were departures from the sci-fi funk he made his name with as one half of hip-hop production team The Neptunes in the late Nineties and early Aughts. Instead, Williams’ recent run has been steeped in the warm, studio-intensive sounds of the smooth Seventies.

“Just so you know, none of it is pastiche,” Williams protested on Wednesday night in the penthouse of The Standard, East Village. He was sitting beside New York artist Daniel Arsham, who recently crafted sculptures of Williams’ earliest instruments — a keyboard and a drum machine — so that they appeared to be “petrified.” The pieces were on display for one night only and a viewing party was about to start. The sun was going down and the light was fantastic. Next to the pair was the sculpture of Williams’ Casio MT-500 keyboard, which Arsham cast from crystal and shattered glass and then degraded until it looked like an artifact from an archaeological dig.

“We didn’t want to go back and replicate everything that was done,” he said of his recent work. “We just realized that no one was…everything is so angular and everything is so quantized that nothing feels human anymore. Just by sheer virtue of the fact that we just wanted to jam and make s–t just felt so infectious and so contagious.”

“My dad went to RadioShack because he used to have a van,” he said. “You see, I’m a Seventies baby. He would have, like, these vans that you would customize or whatever with the bed in the back and s–t and I don’t want to know. So he’d go to RadioShack when he would be fixing up his systems and stuff, and I would always go to the keyboard aisle.”

“When I look at that, I don’t remember myself,” he said of the keyboard sculpture. “I immediately think what [its designers] must have been thinking in Japan — when they were making it and how it doesn’t matter anymore.”

Arsham chimed in. “I just love that in some really random, oblique way, some engineer in Japan has influenced the songs on the radio this past summer.”