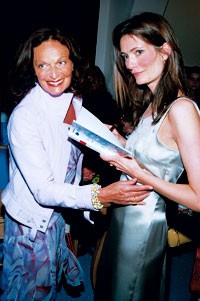 It was so much a scene out of “Bergdorf Blondes” that it could have been choreographed. With the swooning over Plum Sykes’ Behnaz Sarafpour dress and the barely touched Magnolia cupcakes making the rounds at the John Barrett Salon, it was just too much for Vanity Fair’s Amy Fine Collins, who fainted midway through Sykes’ book party at Bergdorf Goodman.

“She was pulled away in a stretcher. Can you believe that?” opined Sykes, who watched the firemen swoop in and save the day.

Needless to say, there were plenty of Bergdorf blondes and brunettes in attendance, including Lauren Bush, Amanda Hearst, Emilia Fanjul, Anne Grauso and, oh yes, Harvey Weinstein (with one male and one female assistant in tow). Some even wondered where Plum got her inspiration. “My dad read the book on the airplane from Florida,” confessed Samantha Boardman, who added that he’d hidden it under a “Kissinger biography or something.” “He called me and said, ‘Are you one of these ‘Bergdorf Blondes?’” Her reply: “I sure hope so.”

At the dinner later at the Plaza Athénée, hosted by Helen and Tim Schifter and Euan Rellie and Lucy Sykes, the family waxed poetic about Plum’s literary achievements to a very pregnant Nancy Jarecki and husband Andrew. Plum’s twin sister, Lucy, gushed earnestly: “I think Plum’s the Edith Wharton of our day.” Hopefully, she won’t ever find herself in Lily Bart’s shoes.