His week-long goodwill tour of the U.S. came to a close with a charity polo match at the Greenwich Polo Club where he won the crowd — and the game-winning goal. 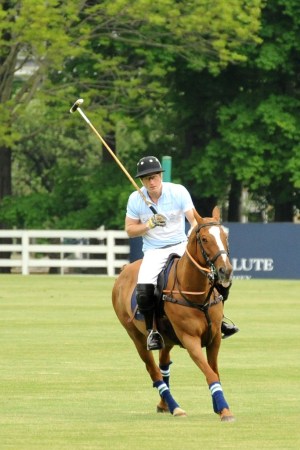 Prince Harry’s week-long goodwill tour of the U.S. took him from a military Paralympics event in Colorado to Capitol Hill to a baseball date in Harlem to a tour of the Hurricane Sandy-ravaged Jersey Shore with Gov. Chris Christie. It came to a close on Wednesday in tonier climes with a luncheon seat between Karolina Kurkova and Stephanie Seymour under a large white tent on the kempt lawn of the Greenwich Polo Club.

The prince had trekked to the upper crust Connecticut enclave for a charity polo match, dubbed the Sentebale Royal Salute Polo Cup after his children’s aid charity in the African kingdom of Lesotho.

A crowd of about 400, which seemed much smaller cast against the open expanse of a 300-yard polo field, made the midweek trip to the Town & Country-sponsored match, snaking through security checkpoints and past a cluster of satellite trucks and their TV crews. Attendees did all they could to don their springtime best despite gray skies and early afternoon showers. Before lunch, the bar tent was a sardine tin of floral prints, fancy hats, khaki slacks and blue blazers.

Jason Wu, Jessica Stam and Johan Lindeberg were among those dotting the crowd in the larger lunch tent. International polo standard-bearer Nacho Figueras arrived with an entourage that included his wife, Delfina Blaquier, their four-month-old daughter, Alba, and Valentino and Giancarlo Giammetti. Kurkova allowed that she had worn a dress with blue accents at the prince’s request. His team would be wearing blue kits; she was presenting the winner’s trophy at the day’s end, and he wanted some extra luck.

“I’m here to see Prince Harry,” said Wu, summing up the general sentiment of the lunch crowd. “When they say Prince Harry’s playing polo, you go.…And also, you know, it’s Wednesday and I get to play hooky.”

The 28-year-old prince arrived at exactly 1 p.m., causing a few partygoers to break an edict against camera phone shots in the tent. He wore dark blue flat front pants, a white dress shirt, navy sport coat and no tie. Standing stage left during remarks by Greenwich Polo Club founder Peter Brant, Harry shifted from one foot to the next until it was his turn at the lectern.

“This is the last day of my tour around the United States,” the prince said over an ambient wash of camera shutters. “Thank you for a wonderful week. I’ve witnessed the extraordinary generosity of the people of this great nation.”

Following lunch and a few last sprinkles of rain, guests moved to the field and grandstands for the match, which ended in a 4-3 victory for Harry’s Sentebale squad against Figueras’ St. Regis team. The prince himself scored the game winner with 2:13 to go, though the field announcer had initially credited one of his teammates. Figueras rode his mount directly towards the grandstand before play could resume.

“That was Harry’s goal!” he clarified.

“So Prince Harry will get credit for that goal,” the announcer said over the PA system, giving HRH one last American parting gift.