New book, “POP: The Genius of Andy Warhol” (HarperCollins), offers a detailed account of the artist's rise to fame. 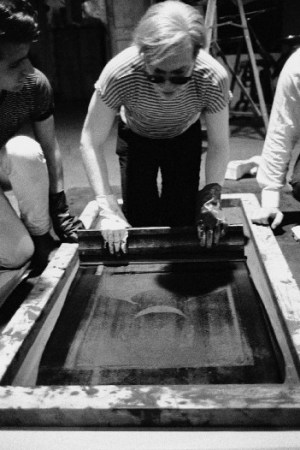 He may be best known for his paintings of Campbell Soup cans and for his statement, “Everybody will be famous for 15 minutes,” endlessly quoted in reference to celebrity culture. He had no truck with the reverence with which art was held in his time, and enjoyed poking fun at this attitude by talking about the financial aspects of painting. But even Andy Warhol, who died in 1987, might have been a bit surprised to see that his seminal silk screen “200 One Dollar Bills,” considered a starting point of Pop Art, went for $43.7 million at Sotheby’s in New York on Wednesday night, especially since the auction house’s estimate was $12 million.

Of course, he would have been delighted. So it’s a good moment for a new book, “POP: The Genius of Andy Warhol” (HarperCollins), which offers a detailed account of how he made the transition from successful New York illustrator to one of the most talked-about artists around, focusing specifically on Warhol’s life in New York in the Fifties and Sixties.

The authors of “POP,” Tony Scherman and David Dalton, are both longtime writers with strong pedigrees. Scherman, who made his reputation as a music writer, began researching the book in 2000, after writing a profile for The New York Times describing Warhol as the precursor of sampling in hip-hop. He wanted, he says, “to write something about the Sixties as a time of incredible fruition and creativity.”

In 2006, however, Scherman became ill and had to stop working. But the deadline was coming up, so he enlisted Dalton, whom he’d earlier interviewed for the book, to take over the project.

“What he got was a first draft, no prologue, no epilogue,” Scherman says. “He did some chapter transitions — there was a lot of loose stuff that he tied together. He did some original writing. He rescued the book.”

Scherman, who had also amassed an enormous amount of research by the time that he had to stop working — he describes getting on an airplane before 9/11 with a huge piece of luggage that “looked like a Hammond Organ,” but was actually a solid mass of Xeroxes — got reinvolved with the book in the fall of 2008 when his health improved, and wrote the prologue then.

Doing the work was full of surprises, Scherman says. One of them, for him, was “that Warhol was a great artist. I didn’t think he was for a really long time.” Initially, he notes, he regarded Warhol as “a big phony.” One startling piece of information — disclosed to him by Warhol’s doctor Denton Cox — was that the artist suffered from a disfiguring condition called hemagioma on his testicles, which covered them with a ruby-like rash, which was apparently one reason that he was ill at ease with sex. He observes that Warhol often quoted Noel Coward on the subject, “Sex is about lighting.”

And Warhol’s social awkwardness wasn’t feigned. Dalton, who has written books on such subjects as Jim Morrison and James Dean, had first met the artist with his sister Sarah at a party when both were teenagers. “I had never met anyone who was as eccentric as that,” Dalton recalls. “He was totally recessive; he was incredibly shy.” Nevertheless, Warhol invited them to visit him at his townhouse on Lexington Avenue. Dalton says, “I had never met an adult who had all this sort of campy, fun taste,” noting that the house was full of such items as a pinball machine and a wooden Indian.

Soon the young Daltons became Warhol’s first fine-art assistants. “I would go upstairs and help Andy,” Dalton recalls. “He was just beginning to paint Pop Art. There was a Popeye and a nose job before and after and a big anatomical drawing showing the penis. The entire shelves in the back were filled with movie magazines, stories about Sandra Dee and all of the James Dean death stuff. He was totally obsessed with movie stars and had drawings of various stars’ feet. He was always asking people like Liz Taylor, ‘Could you take your shoes off, and I’ll draw your feet?’ Some people were shocked and outraged and wanted to call the police.”

When they first met him, Dalton notes, Warhol would talk as much as anyone, but then he “invented this kind of Chaplin-esque character who made funny little comments.” It was actually Sarah Dalton who first clued Warhol in to the fact that he could use a silk screen to reproduce photographs, and the first image Warhol selected for them to silk-screen was a shot of Roger Maris hitting a home run.

“We weren’t really that skillful at it, and he loved the messiness of it,” Dalton recalls. “It looked almost like an Abstract Expressionist painting.” Warhol, he adds, “made photographs of photographs, and if they had been really clear and neat and clean, they wouldn’t have had the impact. Andy’s paintings were really basically prints. That led to this sort of factory-line system.”

Sarah also edited Warhol’s first film, “Sleep,” which was touted as being eight hours long, but was actually just, her brother notes, 27 minutes of film on a continuous loop. Warhol, he adds, was inspired in his aesthetic by the conceptual advertising of the likes of George Lois at the time. “Picasso and Van Gogh had a pride in being bohemian, but when you got to Andy, that is gone. He embraced consumer culture, because he came from the lowest strata of society, and his father was a day laborer.” Warhol, he explains, erased “the line between art and product. A movie-star image was a product. He sold Campbell’s soup like Gristede’s sold it. Art had become a kind of religion since Van Gogh, but with Pop Art and with Andy, he said, ‘This is another piece of merchandise.’”