Portrait of the Artist

In his 91 years on earth, Pablo Picasso immersed himself in everything from painting to sculpture to costume design. Not to mention all the women he bedded, wedded, tortured and left. 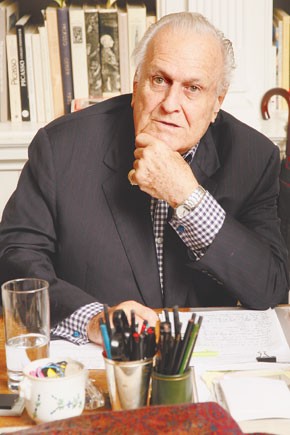 In his 91 years on earth, Pablo Picasso immersed himself in everything from painting to sculpture to costume design. Not to mention all the women he bedded, wedded, tortured and left. Perhaps most significantly, the artist became involved with a young ballerina named Olga Khokhlova, whom he met while he was working with the Ballets Russes on the play “Parade” in 1917. The marriage that followed was, by all accounts, disastrous and combusted when Picasso fell in love with a 17-year-old girl named Marie-Thérèse Walter.

Here, the legendary historian John Richardson discusses Picasso, the women in his life and the third volume of his biography of the artist, “A Life of Picasso: The Triumphant Years, 1917-1932” (Knopf), which comes out on Nov. 13.

WWD: How did the process of doing this volume differ from the first two? Did your opinion of Picasso change in any way after writing this one?

John Richardson: My opinion of Picasso didn’t change, but my knowledge of what happened totally did. Basically, this third volume is about him getting married in 1918, and then, 10 years later, meeting one of the loves of his life, this sexy Swedish girl, Marie-Thérèse, at which point the marriage completely comes apart. Everybody had always swept the wife under the rug and she played a very key role in his art and in his life. The marriage started off incredibly badly. Just before the wedding, this Russian ballerina [Khokhlova] had this mysterious accident and wound up on a stick at the wedding. And it must have been appalling for her and appalling for him, because Picasso liked lots of boom-boom and here is his wife’s leg in plaster for the whole of the honeymoon. And she did have this enormous influence on Picasso. She did turn him into a kind of conventional bourgeois Parisian with a nice apartment and a butler and a cook, and a nanny and a governess. He gave into it. His paintings became very classical and he led this very classical life, and he went to all the right parties and became very much a part of the beau monde in Paris. And then he reacted violently to it and put all the blame for it on his wife.

This story first appeared in the November 5, 2007 issue of WWD. Subscribe Today.

WWD: Reading the book, it seemed like the main reason Picasso married her was because of her chastity. He mythologized her because she wouldn’t have sex with him, then married her to solve that problem.

J.R.: Yes, I think he’d never had this before. He was a wildly attractive, very masculine, very physical, very sexual animal, and I don’t think he’d ever been turned down. So that was a big part of it. And Picasso liked being the Minotaur with young virgins being sacrificed to him.

His younger sister, Conchita, died when he was 13 or 14. When she got sick, he made this vow to God that if she lived, he would never paint again. Then having made the vow, he did paint again, and she died. And this twisted everything up for him. And he got this fixation about girls being sacrificed to him and sacrificed on the altar of his art.

WWD: In the first two volumes, you write about how he was obsessed with creating this myth around himself, saying Picasso was making these incredible drawings at the age of five, when, in fact, he wasn’t. And I wondered whether the reverse wasn’t also true: that he was able to justify being as horrible as possible because he could turn it into great art. It’s part of his narcissism.

J.R.: Well, it was beyond narcissism. It was more about his thinking he was God. He thought he was Christ. I went to see him once and he said, “You see, I’m a prophet.” He said, “See this drawing?” It was a drawing with a background of a fever chart, like you’d see in a hospital. On top of the fever chart, he’d done a very realistic drawing of his mistress, Jacqueline, looking absolutely dead. He said, “You see, I did this drawing and three days later she got a fever.” But obviously what happened was that Jacqueline was sick, she’d become chronically ill. She was very susceptible to having fevers. So it wasn’t a question of his being a prophet. It was a question of knowing what buttons to press so that she would get a fever.

WWD: That’s pretty scary. What was he like with you?

J.R.: I loved him. To his friends, and particularly his men friends, he was unbelievably generous. I was just an art student when I met him, but if you were young, he was after your energy. He was like Dracula.

J.R.: The basic difference is that with Picasso, at the end of the day, you’d say, “I had the most wonderful day, but why am I so utterly exhausted?” And it was because he’d taken your energy, and then he’d go strutting off to the studio at the age of 80 or whatever it was and work all night off of it. And one felt flattered that he found one’s energy worth extracting. Whereas Warhol was the reverse. Warhol was so seemingly passive, he just magnetized it. Picasso gave it out like a generator and then sucked it back in.

WWD: As the former director of Christie’s in the U.S., what do you make of the current state of the market? Are you amused or appalled by it?

J.R.: Both. I’m horrified by the grotesque sums of money being paid for second-rate works by not-always-great painters. When you can buy Titian for less than Warhol, something’s wrong. These hedge fund people want to buy big flashy pictures that scream from the wall, “I’m a Warhol” or “I’m a Picasso,” regardless of the quality or anything else. So an awful lot of sh—y paintings go for an awful lot of money.

WWD: What sort of debt do artists like Damien Hirst and Jeff Koons owe Picasso?

J.R.: They both owe considerable debts to Picasso, because Picasso made it possible for an artist to use any sort of material. Although, I think Jeff Koons is much more imaginative than Damien Hirst.

WWD: There’s going to be a fourth volume, isn’t there?

J.R.: There is. But I’m going to be 84 in February, and I have macular degeneration. If I’ve got a bright light I can work easily. If I have to go through 10 volumes of French memoirs and get them off the shelf, it takes forever. So I’ve got two or three people in mind to work with. I want to record as much as I know about the next 40 years so that somebody else can write it.

WWD: Because you’re worried you won’t have time to finish it?

J.R.: Listen, at 84, anything could happen. I have a very good memory for the past, but what happened yesterday is zero. I’m always desperately looking for a name or a word. And that’s not going to get any better.