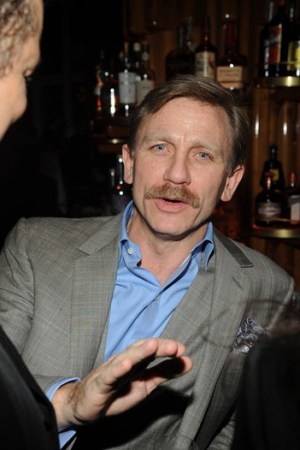 The Boom Boom Room, which had its grand opening Saturday night, was back in full swing Sunday for Purple Magazine’s party sponsored by Audemars Piguet. The room was swimming with girls with messy hair, and if anyone showed up without black eyeliner, they were apparently denied entrance. Chloë Sevigny was seated at the massive bar with Kim Gordon of Sonic Youth. Lindsay Lohan hung out in the back. A mustachioed Daniel Craig and his girlfriend, Satsuki Mitchell, came around 11, flanked by André Balazs. Fran Lebowitz took one look at the place and said, “Wow, I think this would make a nice apartment, if we could just get some of these people out.” Others mingling about were Terry Richardson (snapping photos of guests on a digital camera), Carine Roitfeld, Leelee Sobieski, Leigh Lezark, Jared Leto and Mary-Kate Olsen. A DJ spun New Wave and the party was still going strong well after midnight.