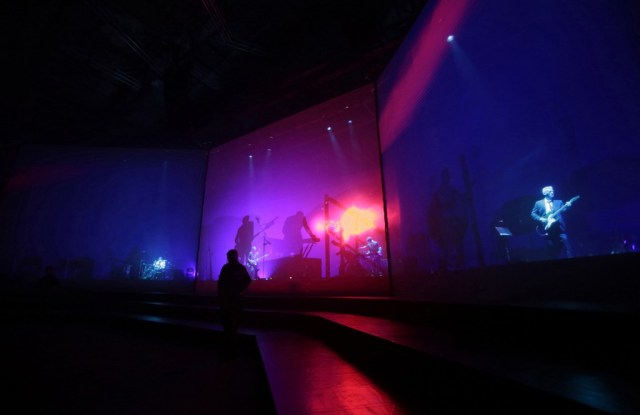 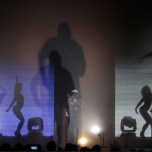 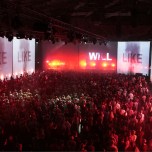 Gearing up for Saturday night’s U.S. premiere of “Massive Attack V Adam Curtis” at the Park Avenue Armory, Curtis, a documentary filmmaker, isn’t sure just what the New York crowd will make of the music and documentary film mash-up.

A full-time producer-director with the BBC, Curtis spent the better part of his off hours over a period of seven months creating the film and site-specific show, and collaborating with the band’s Robert Del Naja. United Visual Artists also had a hand in the design and staging, which will include 11 gigantic screens in the Park Avenue Armory. Meant to expose the hidden realities of “this strange anxious age,” the performance will remind audiences of the more arresting moments in politics and power over the past 30 years, Curtis said.

The crowd will get more than a glimpse of “Donald and Ivana Trump, Nicolai and Elena Ceausescu, Jane Fonda and Ted Turner, Hamid Karzai and his brothers, everyone in Goldman Sachs who made a killing in 2008, the neutron bomb, the Siberian punk movement, Bambi, and all your own worst fears,” as the trailer promises. Watching the barrage of images, it is tough to reason that Curtis hailed from bucolic Kent, England, where he said he was raised to be “prim and po-faced.”

Here, Curtis talks about the film:

WWD: Do you think the American crowd will respond differently to the film than the ones at the Manchester International Festival and Ruhrtriennale International Festival of the Arts?
Adam Curtis: I’ve got no idea who is going to come. I have always had this idea that the people who do audience demographics are quite useless. There are all sorts of people around who so bored with traditional media that they tend to turn away from it all. Like me, they find a lot of newspaper articles dull and boring. And TV programs predictable. You know what’s going to happen within minutes of turning it on.

WWD: Are you really scared?
AC: I am a small TV journalist working with a bigtime rock band that is going to show an odd film you can’t explain in the middle of Park Avenue. I am trying to fuse a serious political argument with entertainment. I am terrified of posh intellectuals. They don’t tend to like what I do.

WWD: How did you get hooked up with Massive Attack?
AC: Three years ago I was doing this odd show, immersive theater with Punchdrunk Productions called “It Felt Like A Kiss.” We created a 3-D view of that world, as though the audience was walking through the film. We experimented with it, grabbed it and turned it on its head. Robert [Del Naja] saw it and asked if we might work together. He finds a lot of modern music rigid. We are attempting to fuse associations. Audiences want to explore things on their own and they don’t want to be told what they should feel. [Punchdrunk’s founder Felix Barrett gets a special note of thanks on the Armory’s Web site page for Massive Attack V Adam Curtis.]

WWD: Does fashion have a role in the film?
AC: A great deal of fashion has been pillaged, stolen and used from the last 50 years. There is the wonderful segment of people dancing [shown in clips] from the last 50 years. There is a lot of fashion in those two minutes. One of the arguments I try to make in the film is that society has gotten very static. We’re constantly going back and recycling the past. That is something we see in music, film and fashion. There is this constant attempt to go back. I noticed that the early Nineties are being regiven to us. In a sense, modern culture is quite static and the same can be said of fashion. It lives in history.

WWD: Do you know what you will work on next or have you already started?
AC: Well, I have a full-time job. I am making a documentary series for the BBC about the relationship between entertainment and power. It will go from the gangsters of the Forties in Britain and America that were corrupting the music industry to the rise of Rupert Murdoch and up through Google and others. I call it the Media Industrial Complex.’ Entertainment is wonderful but it’s not quite as innocent as we might think. It is central to the way we are managed at the moment. I think entertainment is a fascinating strange beast. The liberals will hate this but I want to show what makes Murdoch a tragic fallen figure, a transitional figure, whose time has come and gone. Experimentation is the thing we should all be doing. Everything is so rigid.

WWD: You are here from London for a few weeks. What do you like about being in New York?
AC: I suddenly realized yesterday that New York feels like an old city. And of course the whole idea of New York was to be the modern 20th century city. I don’t mean that in a nasty way. I quite like it. New York has become one of the old great capital cities. It feels like it has changed. It’s relaxed a bit. Its modernity has moved elsewhere. I was in Chongqing a few months ago, and funnily enough it reminded me of the descriptions of the chaotic, modern New York in the novels of the Twenties — like John Dos Passos. It’s a city that is just exploding. New York suddenly feels like it has relaxed. The people have relaxed and they can be a bit older.

WWD: Will you have time to do anything fun?
AC: I am trying to figure out a way to visit Hart Island. Do you know about this? It’s in Pelham Bay, the West End of Long Island Sound. It has, what do you call those cemeteries where they bury people who can’t afford a burial? Potter’s field. And it was an artillery missile base in the Fifties, and a POW camp at one time and there are the remains of a mental asylum. That’s what I’m interested in exploring — the old hidden remains of New York, not the posh art museums. I am not sure yet how I will get there. I don’t think you’re supposed to go on it.