During a break in her current trek, Earhart, who's of no relation to the famed pilot, responded via e-mail to questions from WWD. 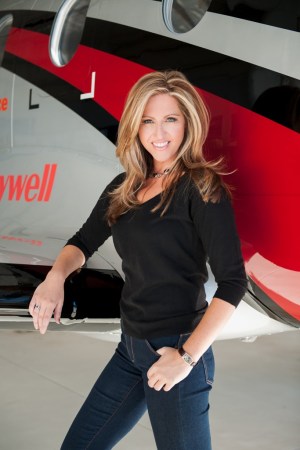 Despite being of no relation to the famed pilot with a similar name, Amelia Rose Earhart was destined to take flight and is now trying to soar into aviation history.

The 31-year-old private pilot and weather news presenter took off Thursday from Oakland, Calif., on a journey that she hopes will make her the youngest female ever to circumnavigate the globe in a single-engine airplane. Heading south toward the Caribbean, her challenge is expected to take two-and-a-half weeks and will cover northeast Brazil, the South Atlantic Ocean, then the African continent, the Indian Ocean, the Pacific Islands and the Pacific Ocean before returning to California. Along the way, she and her copilot, Shane Jordan, will stop in 14 countries, albeit briefly.

Told by relatives that she is a descendant of Amelia Mary Earhart, as a college student Earhart hired a genealogist who informed her otherwise. Nevertheless, in time she got her pilot’s license, and in 2012, she recreated her namesake’s transcontinental flight from Oakland to Miami in a Cirrus SR22 to complete her instrument training hours. The blonde-haired Denver resident aims to raise awareness for her Fly With Amelia Foundation, which awards scholarship to teach teenage girls how to fly.

During a break in her current trek, Earhart responded via e-mail to questions from WWD.

WWD: What made you give up your weather forecasting flying to make this trek?
Amelia Earhart: Well, with a name like Amelia Earhart, it was only a matter of time until I caught the piloting bug! I’ve always felt a connection to the original Amelia, and I’ve now been flying for 10 years. But when I decided to take on this around-the-world journey, it became clear that it needed my full-time attention. Planning a trek like this is a lot of work!

WWD: What made you decide to learn to fly?
E.A.: Having my name, people would always ask me if I was a pilot. One day, I got fed up with having to say no and seeing the look of disappointment on people’s faces. Ten years ago I took a discovery flight to test the waters and see if becoming a pilot was something I wanted to do, and I’ve been doing it ever since.

WWD: How does flying this plane differ from flying in a helicopter for your former newscasting duties? How fast will you fly? Have you encountered any unexpected turbulence?
E.A.: During my time in the helicopter reporting traffic in Los Angeles and Denver, I was not the one piloting, but I do have 4,000 hours’ experience operating a Cineflex high-definition video camera onboard the Eurocopter AS350 helicopter. The plane I’m flying around the world now, the Pilatus PC-12, cruises at 260 knots, which is approximately 300 mph.

WWD: How do you pack for such a trip? What is your uniform of choice?
E.A.: Spending so much of this journey in the air means packing for comfort. Since I’ll be in a variety of locations with different climates, I’m taking light, breathable layers — Lululemon is one of my favorites while in the cockpit. My copilot and I also have fantastic jackets from Canada Goose that help keep us warm and comfortable.

WWD: How do you handle in-flight meals?
E.A.: In flight, I like to eat things that are high in protein and maintain my blood sugar level. I’ve definitely packed a lot of Cliff bars because they’re easy to transport and tasty!

WWD: Did you read a great deal about Amelia before you mapped out your own trip? Which country are you most looking forward to seeing? How much time do you spend in each place?
E.A.: I read extensively about Amelia before planning this trip — I’m a bit of a walking encyclopedia at this point! Yesterday, before I kicked off the trip, I even got to hold her altimeter at the Oakland Aviation Museum. And I’m taking a piece of fabric from her pilot’s seat around the world with me. I’m really looking forward to visiting the Maldives, and for the most part, I’ll be in each location only overnight.

WWD: What’s the funniest thing you have been told about your ambition?
E.A.: I’m not sure if this counts as being funny, but aviation is predominantly a male-dominated field, so I was taking a photo recently in front of an aircraft, and a gentleman walked up and asked me if I wanted a pilot in the shot. I said, “Sir, there is a pilot in the shot.” And he said, “Oh, am I in it?” I said, “No, I’m going to go fly this airplane!”

WWD: How do you keep your focus? Do you have a favorite saying that you use as a motto, so to speak?
E.A.: When the original Amelia set out on her adventure in 1937, she was living her passion and leading the charge for the pilots of the future. She said, “My ambition is to have this wonderful gift produce practical results for the future of commercial flying and for the women who may want to fly tomorrow.” I feel like I’m the future she was referring to, and thinking about that quote always keeps me on track and reminds me why I love doing this.

WWD: How much do you hope to raise through your foundation?
E.A.: I hope to raise as much as possible! The more I’m able to raise, the more flight-training scholarships we can grant to young women.

WWD: How did your Target sponsorship come together, and what sort of support have they provided?
E.A.: The Target sponsorship came about because I needed to stay connected while on the go. I frequently shop at Target for all my needs — cute home goods, groceries and everything in between. Target provided me with an iPad Mini, which I’ve loaded all my flight plans onto — really cuts down on all the paper! They’ve also outfitted me with Fitbit Flex to chronicle my fitness activity throughout my journey.