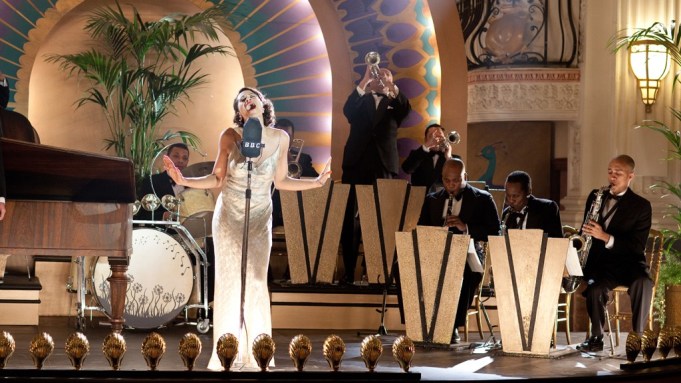 Costume designer Lindsay Pugh says it was a “gift” to dress the leading ladies of the new television miniseries “Dancing on the Edge,” a period drama about an American black jazz band in London in 1932.

Pugh described the look of the period as “glamorous at all times.”

Here, a chat with Pugh about the workings behind the set of the BBC produced drama series, which airs Saturday on Starz.

WWD: How did you prep for “Dancing on the Edge?”
LP: I spent  lot of time looking at old newsreels of the time and sourcing photographs and articles from libraries and archives. I also looked into the histories of the famous British jazz players of the time, and of course there is a rich source of photographic material of the Royal family and grand social occasions. Also, it was the golden age of cinema, so there were many fashion plates to look at as well as my library of books documenting everyday life in Britain.

WWD: Please describe the look of men’s and women’s apparel during the Thirties.
LP: The women’s silhouette of the early thirties was slim and languorous, long and tall with sensuous curves. The corseted and structured shape of the Victorian and Edwardian era had all but disappeared during the Great War, apart from on some more elderly ladies who hung on to their corsets for life. The fabrics used for women’s clothing was soft with a good drape — often at least for those that could afford it — made out of silk, and many dresses were cut on the bias to make them hug the body, showing the woman’s shape. Eveningwear for women was always exquisitely cut, mostly from silks and satins and often decorated with beautiful beading. Many dresses were black so that the wearer could show off her glorious collection of jewels. The dresses were not warm to wear and happily the lady could add a fabulous fur wrap.

Men’s suits were well tailored with strong shoulders and wide lapels. The trousers were pleated at the front, high-waisted and often with a 22-inch hem, turned up.

WWD:  How important were women’s undergarments in achieving the desired style and silhouette?
LP: Bras were a fairly new invention, and yes undergarments were very important at this time…The low-cut backs on many evening dresses needed all sorts of newfangled ideas to keep them invisible while still supportive. Corsets were still used for those who required one and were quite lightweight with a long line and suspenders at the bottom to fasten stockings onto.

WWD:  Were hats, gloves, furs and jewelry important statements, especially in the upper classes of the period?
LP: It was very rare for a woman to be without a hat. Indeed, it was classed as part of her “costume” when going out. Gloves were also considered part of the ensemble, but not impossible to find a woman without these items and I did find quite a lot of reference to back that up. I think it makes the character live a little more if there is not a complete outfit every time. The jewelry and furs were definitely statements of wealth and as such were very much on display.

WWD: What was your biggest challenge on this miniseries?
LP: The piece is about the rich and royal and is often set in clubs and hotels. There is obvious wealth on display and the budget did not match our characters income, so we had to be clever about what we could use and when.