Moore took a few minutes to talk about his provocative political prints, the sports industry and his new book about Adidas. 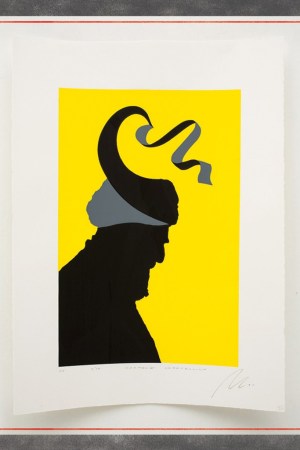 Peter Moore has been entrenched in the athletic industry for decades. In the high-flying Eighties, Moore, a proven risk-taker, left Nike, where he was the brand’s first creative director. In 1989, he and Rob Strasser, another former Nike executive, took a chance with Adidas. The duo agreed to try to rev up the then-ailing brand after being invited to its headquarters in Germany.

After Strasser died unexpectedly at the age of 46 in 1993, Moore, Adidas America’s global creative director, took on the chief executive officer role for a short time. In 1998, he exited the company to chase his lifelong ambition of printmaking. Twenty-four years later he is an Adidas brand consultant, an Adidas Group board member and an artist opening “The Name Game” exhibition at Gallery Homeland in Portland, Ore., Friday.

Moore took a few minutes to talk about his provocative political prints, the sports industry, the Lance Armstrong controversy, his new book about Adidas, and why he and his contemporaries are still working so damn hard.

WWD: How long have you been doing art and why did you decide to have your first show now?
Peter Moore: I’ve been doing art in some form or another for years. I went to art school, Chouinard, now California Institute of the Arts, with the idea of being an artist, but finances got in the way, so I went into graphic design. For Christmas cards, I decided I would print them one year. That was some 40 years ago — I am still printing them today. This is not actually my first show. I have shown the Christmas cards once here in Portland, and this past summer I had a show in Germany on the subject of Africa.

What can people learn from your art? Are there a few pieces that should rattle people and was that your intention?
P.M.: I’m not sure I want people to learn anything from the art. What I hope to stimulate is conversation. Yes, I express an opinion, or an observation, but that’s one man’s opinion. If I can stimulate a conversation, maybe we find a solution, or a compromise. That’s better than fighting each other, or not really understanding what the other person is thinking. The subjects I pick come from all over. Yes, they are mostly worldly, but its a pretty small world we live in today. I don’t think there is any one piece in the show that will cause more conversation than another. It depends on your point of view, and/or interest in our crazy world.

You and your peers (i.e., Nike’s Phil Knight, Columbia Sportswear’s Tim Boyle, Quiksilver’s Andy Mooney, etc.) are still punching the clock. Where does that kind of drive come from?
P.M.: Well, I can’t speak for the others, but there was something about the early days of the athletic footwear industry that created a great deal of passion with people for what they were doing, and for whom they were doing it. That kind of passion is not easy to walk away from. It’s really interesting. At least it was interesting. It is not so interesting these days. As the industry has matured, the great adventure seems to be disappearing. It has gotten rather conservative, maybe that’s what success does to people and brands.

Your new brand book “Adidas: The Story as Told by Those Who Have Lived and Are Living It” is meant for staffers, but what would outsiders be surprised to learn?
P.M.: What built the Adidas brand was one man’s [Adi Dassler] passion for better footwear [and] that grew into a national icon. It is a very different story from the Nike story, which is also about passion, but different times, different cultures, and different people. Still, two fantastic stories that I was fortunate enough to be involved with.

Advertisingwise is there anything that has impressed you recently?
P.M.: I can’t say I’m impressed with anything in particular. I am amazed at how it has all changed with the new media and digital and all the things old guys like me don’t really understand. That is what is surprising. As for the work itself, it’s not nearly as interesting as the media. Even Apple has slowed down. The Lebron James stuff from Samsung I like, because you get to see another side of the guy. Maybe he is human after all.

How, if at all, do you think Lance Armstrong’s interview with Oprah Winfrey will affect our celebrity-loving culture and consumers’ interest in VIP-branded products?
P.M.: I don’t really believe Armstrong’s coming clean will have much effect on anything. We live in a culture these days that is pretty Teflon about these things. I think the whole thing is a shame because there are no more heros for kids to look to. They can’t trust anyone anymore. That, I think, is a problem beyond the sale of sneakers. Athletes have become too “professional” and “Win Baby Win” is the only accepted attitude. You have to wonder why kids play sports today. It used to be for fun, now I wonder. Someone needs to reinvent sport for what it used to be, not what it has become.

Those who have worked closely with you would say what?
P.M.: Thank God we don’t anymore.