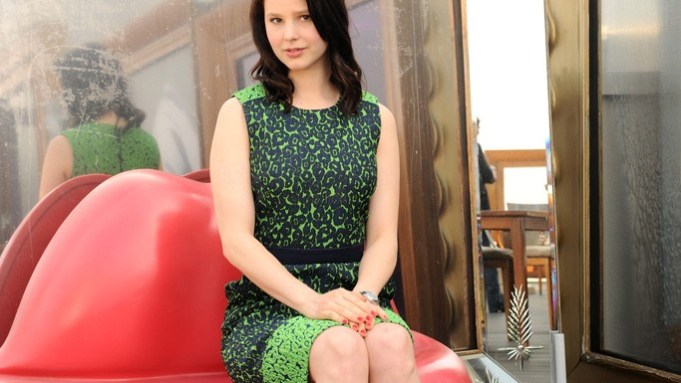 Film is something that Rachel Korine kind of just fell into. “I never studied acting. It wasn’t even on my radar growing up,” the 26-year-old “Spring Breakers” star concedes. “It just sort of happened.” What happened, more specifically, is that Rachel got married to Harmony Korine (of “Kids” fame). “Harmony started writing roles for me so I could come with him while he was away filming, so we wouldn’t be apart,” she says. “That was the idea at first; it obviously evolved.”

Over the course of their relationship, Korine has done three features and several shorts with her husband, but none of the magnitude of her latest film, which Harmony directed and wrote. “Spring Breakers” opened quietly last Friday — in only three theaters in New York and Los Angeles. By Monday the movie had grossed $270,000 (or $90,000 per screen). It opens to a wider release today.

The hyper-sensory film follows a quartet of disenchanted college girls down a drug-fueled, AK-47-accessorized rabbit hole where common sense is frittered away for the sake of escapist splendor. Korine plays Cotty, a pink-haired wild child who, along with a trio of similarly impulsive stoners, robs a local diner to obtain the funds needed to join the spring break melee. They steal a car (their professor’s, no less), hightail it down to Florida, get pinched for underage drinking, ending up in a cell in only their bikinis and sneakers. The girls get bailed out courtesy of the largesse of Alien, a corn-rowed, Kevin-Federline-resembling drug dealer-cum-rapper with a grilled up Cheshire-cat smile, played to mesmerizing effect by James Franco. Shirking all sense of foresight, the girls get engulfed in Alien’s crime spree, and the film takes a much more sinister, albeit entertaining, turn.

According to Korine, the film is a social commentary, a reflection of the go-with-the-flow tenor of today’s American youth culture. Korine can’t really relate. “Cotty, my character, is nothing like myself, but sometimes the more uncomfortable and distant the character is, the more I enjoy exploring it,” she says. In fact, Korine’s never even been on spring break. “My parents didn’t let me. I wanted to so badly, but I had very strict parents. I couldn’t even see rated-R movies growing up.”

Her parents may not be too pleased with some of the more explicit scenes (the bare breasts shown in the film are innumerable), but at least she doesn’t have “Corporation Innocence” to answer to. Korine is the only non-Disney Channel, non-ABC Family alum among the four lead women — Vanessa Hudgens, Selena Gomez and Ashley Benson are the other leads. Also unlike her costars, Korine hasn’t hit megastardom yet.

Here, Korine talks about the film and more:

WWD: Harmony wrote and directed this film, so I imagine this project has been in both of your lives for quite some time now. Do you remember how it all started?
Rachel Korine: He wrote the script two years ago. Before that, I had noticed that Harmony had a growing fascination with spring break. He started to collect images of spring breakers that he’d found online. He’d just send me like a picture of a random girl funneling a beer. I can always tell when he’s sort of homing in on something. This was around early March of 2011, so I told him, “Spring break is actually around the corner. Why don’t you get a hotel room in Florida and research the environment and go write a script?” And he did. He went away for two weeks, and when he came back, he had written the script.

WWD: What was it like working with Ashley, Selena and Vanessa?
R.K.: The dynamic between the four girls really carries the film. We really wanted that childhood bond to seem authentic, so we shared the same trailer, which really helped. Usually when you call “Cut,” everyone goes their separate ways and gets on their cell phones. But we were really up close and personal. We’d play music in the trailer and dance, get silly. The film really plays that up: the girlishness of the characters. You see glimmers of innocence within each girl, which makes it that much more dramatic when the plot shifts.

WWD: Did you have input with Harmony when it came to casting?
R.K.: Very early on, Harmony thought it would be great to have some sort of iconic, young American star-type faces, and I agreed. When we sent the script out, we got responses right away. Selena actually flew into Nashville and auditioned in our living room. Harmony and I just sort of looked at each other and were like, “Wow, this is really happening. This is meant to be.”