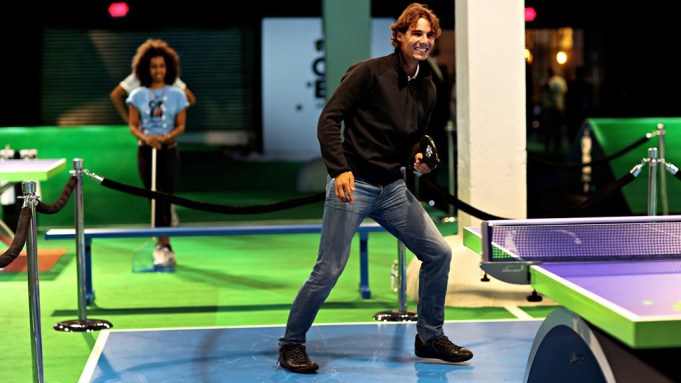 As the New York nights have been unseasonably crisp for much of August, it has felt like tennis season ahead of schedule in the city this year. Or maybe it’s just the long run of promotional invites, events and tie-ins that prefigure in the week before that first serve at the U.S. Open. Nike threw one such happening Thursday to unveil its night looks for the tournament at Manhattan’s Skylight at Moynihan Station, hosted by Rafael Nadal, in town a few days ahead of the tournament’s open today in Flushing Meadows, Queens.

Currently number two in the ATP rankings behind only Novak Djokovic, Nadal heads to Flushing on a tear on the hard courts, in what has been an up-and-down comeback from his 2012 knee injury. There was a baffling exit in the first round of Wimbledon in July, followed by wins in the two contests he’s entered in this month: the Western & Southern Open in Cincinnati and, before that, the Rogers Cup in Montreal. And there was, of course, his French Open win earlier in the season on his historically favored clay. As always with the U.S. Open, subplots abound, none more attention grabbing than a men’s draw that allows for the possibility of a 32nd career contest between Nadal and his great rival Roger Federer in the quarterfinals. (In another subplot Maria Sharapova, Nadal’s fellow Nike athlete, and scheduled cohost, backed out of the tournament and event citing a shoulder injury.)

While a gallery of VIPs and fashion folk enjoyed table tennis and passed Champagne, WWD ducked into a soundproof back room in the cavernous former post office to talk with Nadal about dressing for the New York nights and his expectations for the tournament.

WWD: So how does that translate to the court?
R.N.: [On the] court, I am not that classic. Court is a little bit different. I like the bright colors. I like the powerful colors on court.

WWD: Do you ever go sleeveless off-court?
R.N.: Sleeveless? [Laughing] No. That’s only on court…and to go to the beach sometimes.

WWD: Is there anything about this tournament in particular that you feel like you have to take your style in a different direction, whether it’s because you’re playing at night or in New York?
R.N.: I don’t like to play in dark colors [usually]. You can see through the whole year, I don’t play in brown or dark blue, black or gray but here in New York, the night session is special. A lot of times, I like to wear dark colors in the night: I like the all black, the all gray.

WWD: Do you notice when you put all black on, does it give you a different vibe?
R.N.: It’s powerful. During the night session, you feel power. All the lights. The court is the biggest on the tour. The atmosphere here is one of the special ones. The crowd is very loud.

WWD: Is it just that the noise level is different, or is there something else about the crowd in New York?
R.N.: The noise. The noise is different. Here, it’s a little bit like show. In Europe, the two grand slams are more traditional, but here the fans are very emotional and it’s very special.

WWD: Speaking of New York and this tournament, you have to feel good coming in. You’re playing remarkably well on hard courts lately.
R.N.: You never know what’s going on. But it’s true that I am having a great season, much better than I ever dreamed seven months ago. I am happy the way I played this summer on the hard court. In Montreal and Cincinnati, I played at a very high level, and I hope to have the chance to keep playing well here.

WWD: It’s exciting, looking at the draw, there’s a chance you might see Roger Federer in the quarters. Have you thought about that at all yet?
R.N.: The quarters are four matches away. Four matches in a grand slam, and a tough tournament like this one, are very difficult. It’s very difficult for me to think quarterfinals before playing the first round. We’ll see. It would be great if that happens. But it will be a lot of work for both of us.