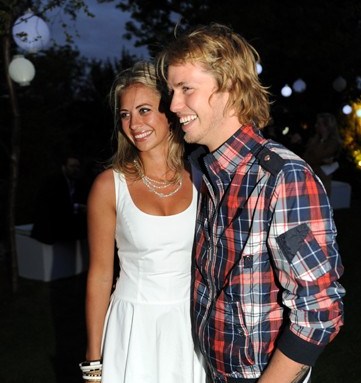 TENNIS STARS IN THEIR EYES: Ralph Lauren’s annual party to celebrate the start of Wimbledon was held at Kensington Roof Gardens in London Thursday, attracting an eclectic crowd of British royals, aristocrats, tennis champions and music-world luminaries. Venus and Serena Williams, Jelena Jankovic, Kelly Rowland, Michelle Williams, Sarah Ferguson, Princess Eugenie, Alexander Spencer-Churchill and Sir Richard Branson all gathered to sip champagne in the rooftop garden space, which was strewn with twinkling lanterns for the occasion. Naturally, the conversation turned to Britain’s often-dashed hopes at the tennis tournament, which begins Monday. A patriotic Princess Eugenie cheered Britain’s highest-ranked tennis player. “I love tennis – Andy Murray can do it this year,” she said. Meanwhile, Holly Branson mused on the players’ physical attributes. “I used to fancy Mark Philippoussis, but they’re not as good looking these days,” she said.