WWD looks back on a 2003 interview with Tallchief, who died last week at the age of 88. 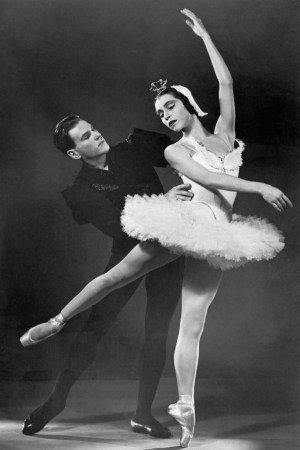 WWD spoke with Tallchief in November 2003 when she visited New York from her adopted home of Chicago for the opening of the New York City Ballet’s yearlong celebration of the centennial of George Balanchine’s birth. Tallchief was the legendary choreographer’s first American muse and third wife.

The former ballerina, ultra-elegant at 78, met with WWD at the Excelsior Hotel. Charming and direct, she covered topics from “George’s” dance hero (Fred Astaire) to her groundbreaking 1960 trip with the American Ballet Theatre to the Soviet Union to why she to loved watching Ellen DeGeneres on “Hollywood Squares.”

NEW YORK — Christmas in New York — everybody loves it.

One of its most cherished institutions, New York City Ballet’s “The Nutcracker,” has enchanted generations of children, who have watched enthralled from the audience, or better still, pirouetted and sashayed about on stage as angels, mice and toy soldiers. Tonight, City Ballet holds its annual gala, opening a yearlong celebration of the centennial of George Balanchine’s birth. On Dec. 6, another benefit, sponsored by Valentino, supports the Balanchine-founded School of American Ballet, from which hundreds of children have been selected to appear in “The Nutcracker” over the past 50 years.

That evening, 103 children will assume the roles of Marie, Fritz and the characters of her reverie, the little girls no doubt longing to one day dance the Sugar Plum Fairy. They will do so in the presence of the original Sugar Plum Fairy, Maria Tallchief, the woman for whom Balanchine created the role.

Tallchief, of course, was Balanchine’s first American muse and this country’s first great ballerina, around whom he shaped the aesthetic that would rock the world of dance. The two married in 1946 when she was 21 and he, 42, and divorced six years later. Though retired since 1966 when she moved to Chicago with her third husband, Henry D. “Buzz” Paschen, and their daughter, these days, Tallchief is “besieged on all sides” by those eager for her perspective on the centennial. Her current trip centers on a two-day engagement with the George Balanchine Foundation for an analysis of two ballets, “Le Baiser de la Fée” (“The Fairy’s Kiss”) and “Mozartiana,” at the Guggenheim. And she will return early next month for the ballet school benefit.

“Anything for George,” Tallchief says, settling into a chair at the Excelsior Hotel. At 78, she seems a bit short, given Balanchine’s renowned preference for long, lanky dancers. But she retains an impeccable carriage and still flaunts the glorious bone structure of her Native-American heritage, along with a powerful, Celeste Holmes voice that, given different circumstances, might have taken her to Broadway. Instead, Tallchief’s body did the talking on stage, assisting Balanchine in building a pipe dream into an institution.

Tallchief brims with anecdotes delivered with the utmost nonchalance. This is a woman who, early on, rejected a p.r. move to make her an instant Russian: “They wanted to call me Tolchieva or something like that”; talked Nureyev into a haircut, for “The Bell Telephone Hour:” “They were so conservative, they didn’t like men to wear tights,” and out-millinered Cecil Beaton, making her own Black Swan headpiece: “He wanted two swans on my head and George said, ‘She’s a ballerina. She can’t have two birds on her head!’’’

Almost always, those anecdotes go back to George, whom she met at the age of 18 when he visited her then company, the Ballet Russe de Monte Carlo, to choreograph “Song of Norway.” “The minute I saw him….We started with the Grieg Piano Concerto, and I thought, ‘I am seeing music. This is it!’ I was a musician [pianist] myself, and I thought, ‘I am in my place now.’ I knew that that’s the way I wanted to dance. I spent my whole life trying to do what he wanted me to do, to try to attain that sort of poetry and magical quality that he had.”

Tallchief recalls the simplicity of Balanchine’s instruction that, for all his insistence on technical mastery, focused as much on elusive emotion. “He didn’t go into tiny, little, ‘Left lateral, here or there.’ He would just say something very simply, like, ‘Look over the balustrade, into the lake.’ And suddenly your face becomes very poetic. Or he’d say, ‘Lift up your cheek as if you want your father to kiss it.’”

Ultimately, Balanchine decided to take his vision of dance to New York, where he and Lincoln Kirstein founded what was then known as Ballet Society. At first, reviews were less than welcoming, with Balanchine criticized for a lack of romance. “On the contrary, he was more poetic than anyone I’ve ever met,” Tallchief says. “Because of him, we became poetic. They talked about his technique, how fast we could move. Well, yes, we had to move fast — that was what was important, how to get from one place to the other. Until he died, he was thinking of ways to make it easier for us to understand.”

Tallchief proclaims “absolutely true” the story of Balanchine’s early interest in the U.S. In England, the ballet dancer saw a movie starring a suave hoofer, Fred Astaire, and decided, “I want to go to America if that’s the kind of dancing they have there.” Years later, in 1978, both men were feted at the first Kennedy Center Honors. “George was so excited to see Fred Astaire,” Tallchief recalls. “I said, ‘Do you want me to introduce you to Mr. Astaire? Because I’ve met him.’ And George said, ‘Oh, no, no, no, no, no.’ George was very shy.” Tallchief herself was honored in 1996.

Yet those appearances were not her sole Washington experiences. Today, it’s difficult to imagine an American president honoring a ballerina outside of the Kennedy Center festivities. In 1953, however, Dwight D. Eisenhower cited Tallchief as “Woman of the Year.” A serious ballet fan, Eisenhower’s press secretary, James C. Hagerty, would make frequent trips from D.C. to New York to watch Tallchief perform. At the time, the White House was trying to pre-glasnost glasnost, and a goodwill dance tour to the Soviet Union was suggested. Although the American Ballet Theatre would make the trip, the State Department wanted Tallchief, still with City Ballet, along. Balanchine consented and off she went.

As for anxiety, “I was a nervous wreck. Especially dancing the Black Swan — talk about taking coal to Newcastle!” But the Soviets loved Tallchief, starting with Nikita Khrushchev himself, who invited several performers to a late supper after a performance. “As each dancer was introduced, he would say, not in good English, ‘Johnny Kriza, oh, yes, you’re Czechoslovakian. Lupe Serrano, you’re from South America.’ And he went on and on. ‘Erik Bruhn, you’re from Denmark.’ Then he got to me and his chief of staff was standing right next to him and said, ‘This is Maria Tallchief and she is an American.’”

Tallchief warmed to Mrs. Khrushchev, who revealed that apparently, her husband’s power wasn’t as absolute as perceived in the West. “Madame Khrushchev spoke English — she was just adorable. She told about how they had wanted a grandchild to study ballet at the Moscow Conservatory, and they wouldn’t take her because she was too fat!”

A decade or so later, after Tallchief had moved to Chicago, a friend of hers intervened to prevent a similar rejection from the School of American Ballet. “Fortunately, my best friend, Elise Reiman, was a teacher there and happened to see Caroline Kennedy come walking in. The teacher who was doing the audition almost said no. She said she was too heavy,” Tallchief recalls. “At that point, Caroline was a little — now, she’s like a bone, a toothpick, but at that time, she was, you know, she was a little…”

“Chubby,” Buzz Paschen pipes up from across the room.

Shortly after JFK’s assassination, Tallchief herself had started a class for Caroline. “Margot Fonteyn, who saw Jackie quite a lot, said to me, ‘Maria, would you be willing to start a class for Caroline Kennedy?’ I said, ‘I would do anything for that poor lady and her children.’ So we started the class and Caroline was in it, as was her cousin, Richard Burton’s daughter, Kate, and our daughter. You know, Jackie was wonderful to those children. Jackie never missed a class. And her first guest, she told me, at the White House was George Balanchine.”

Jackie never asked Tallchief to assess Caroline’s abilities. But true talent is as rare as Stravinsky’s rare Firebird. “I can remember watching a class at the School of American Ballet waiting for my rehearsal to start. Balanchine came along and he watched the class. I said, ‘This is amazing, George. There’s only one good girl in that class.’ And he said, ‘Oh, no. What’s amazing is that there is one good girl in that class.’ And, of course, he was right.”

To wit, most of the children who will get the thrill of a lifetime when they perform in “The Nutcracker” will go on to other endeavors. As for her own opinion of the ballet, not known as a dancer’s favorite, Tallchief maintains “it was wonderful.” And she says, pragmatically of the lucrative crowd pleaser, “Nobody ever said this, but I think had it not been for ‘The Nutcracker’ that New York City Ballet would never have kept on.”

Tallchief and Balanchine remained close until his death in 1983. “My husband and I went to see George when he was so deathly ill,” she recalls. “We walked into the hospital and he was like this,” she makes small, nondescript movements with her fingers. “I said, ‘George, what are you doing?’ And he said, ‘Oh, you see, I am doing steps.’”

Yet this is not a woman who lives in the past. Although she can still “do the splits,” Tallchief now prefers stretching, yoga and Pilates to ballet, and works her public appearances in with the role of a proud mother and grandmother. Her daughter, Elise Paschen, an accomplished poet, holds degrees from Harvard and Oxford and founded the New York City Transit’s “Poetry in Motion” with Molly Peacock. She is now a professor at The School of the Art Institute of Chicago and mother of two, including a four-year-old daughter whose pediatrician, Tallchief boasts, wants her enrolled in a program for gifted children at Northwestern University.

But life isn’t all high art and higher education. Two days after sitting for this interview, Tallchief returns to the hotel lobby for a brief photo session. “We were just watching the ‘Ellen DeGeneres Show.’ We used to watch her all the time on ‘Hollywood Squares,’” the great ballerina says, expressing frustration over an ever-changing syndication schedule. “You always knew that if she was the center square, it was going to be a funny show.”