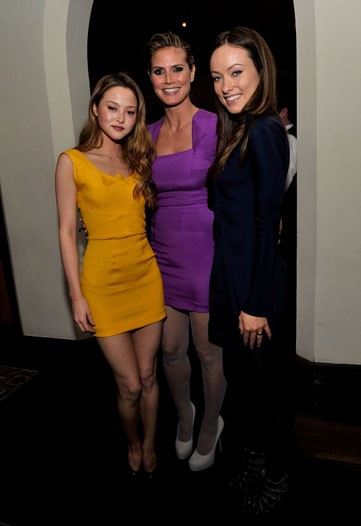 Designer Roland Mouret hosted a dinner with Net-A-Porter Thursday evening at Chateau Marmont in Los Angeles. Heidi Klum, Rachel Zoe, Demi Moore, Amber Valletta, Olivia Wilde, Devon Aoki and Lily Cole were among the Mouret-clad attendees, who dined on salmon and chicken, with some guests saving their appetites for the crème brulee dessert.

“It’s so delicious, I just can’t stay away,” Mouret said as he reached for a second serving of the final course. The holiday spirit had guests in a cheerful mood – Klum and Valletta shared cell phone photos of each others’ children, while dinner conversation ranged from holiday travel plans to favorite travel destinations.

“When we travel, we’re in the hotel for 20 minutes and it looks like we’ve been there two days already,” Klum said of settling in on the road with her husband, Seal. “Now that we’ve embraced for a photo, I should probably introduce myself,” said Wilde to Klum after the two cozied up for a series of pics.

Moore, who sipped a beer while other guests drank Champagne, said she had a very easy Christmas wish list. “I want some sleep for Christmas.” In true L.A. style, the event even drew unexpected A-list cameos. Harvey Weinstein, who produces Klum and Zoe’s reality shows, made an impromptu appearance. “It’s hard to imagine a lovelier group,” Weinstein said as he approached the table.