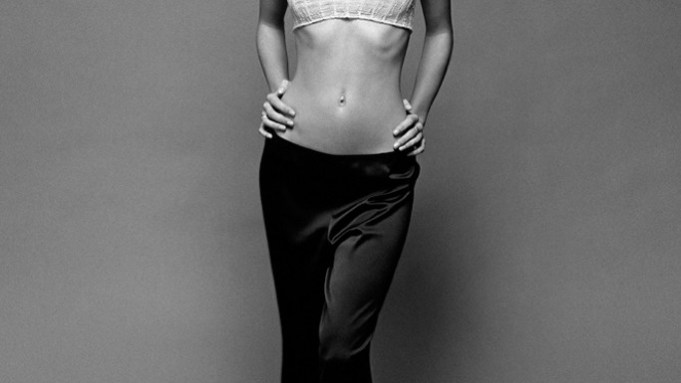 NEW YORK — Posing for a portrait at Christie’s Friday morning, Sante D’Orazio was hard-pressed to choose between two of his large-scale photos for a backdrop. “Can’t we get both?” he asked.

Having sifted through thousands of images before deciding on the final 50 for his “Other Graces” private sale, the lensman hung them with great care. Images of Kate Moss, Naomi Campbell, Johnny Depp, Keith Richards, Christy Turlington, Ed Ruscha and Diane Kruger are among the massive portraits on display through April 19. Some are set against wallpaper he made from hundreds of shots, including scores from a 1997 Versace show.

“You have to interweave the new and the old. But there’s got to be a dialogue and a relationship,” D’Orazio said, gesturing toward a nude shot of a lounging Moss opposite one of Damien Hirst in a priest robe. “They both have a hand to their mouth and ivy leaves behind them.”

Hirst is among the high-profile artists pictured in his “Priest Series,” which is being shown in the U.S. for the first time. Eager to get back into fashion photography after several years of concentrating on abstract art films, D’Orazio said, “A good magazine is a moving exhibition, when done properly.”

Much as he likes the work of Mert Alas and Marcus Piggott, D’Orazio, when asked, was upfront about his dislike of fashion photographers’ “over retouching and the creation of a really fake facade.” He continued, “The sense of realism is being taken away from everything. You don’t get the dynamics of a person. The sense of realism of your subject emotionally and even physically is gone. You’re creating an automatic detachment from your subject. It’s especially true with beauty photos. You might be left with just a mouth, nose and two eyes.”

The danger of post-production with digital photography is that artistry is killed and photographers have no sense of anatomy, D’Orazio said. As for what needs to change, he said, “The sense of constant reference. To me personally, it would be shameful because I’ve struggled my whole life to create my own language. I couldn’t imagine going into a shoot with a Helmut Newton book.”

At 57, the born-and-bred New Yorker said of his exhibition, “Most of all this is a portrait of myself — which is what we all have, the good and the bad, the irony and contentment. That’s what cannot die. But it’s real. It’s living. It’s not just done for the point of shock.”