The Irish actress Saoirse Ronan stars in the new film based on Alice Sebold's eerie bestselling novel, "The Lovely Bones." 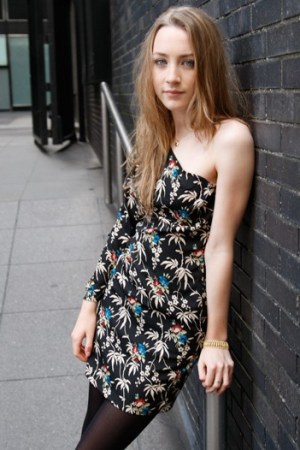 For a 15-year-old girl, Saoirse Ronan has experienced her fair share of cinematic drama. As the pre-pubescent Briony in 2007’s “Atonement,” she witnesses a sexual crime and lies to investigators, a role for which Ronan (whose first name is pronounced SER-shuh) scored an Oscar nomination. And in the Peter Jackson-directed “The Lovely Bones,” opening, she portrays a teenage girl raped and murdered by her unassuming suburban neighbor. It would take a toll on someone twice her age.

Yet despite her slight frame and delicate, porcelain face, it is easy to see why directors choose Ronan for such dark fare. Curled up on a banquette in The Four Seasons Hotel in New York, she projects both the innocence of youth and the self-possession of a working professional. “I’ve always been a bit of an old soul,” she says.

She gives new meaning to that descriptor in “The Lovely Bones.” After her character, Susie Salmon, is killed, she spends the majority of the film in a middle world between life and death. Set in Seventies Pennsylvania and based on the Alice Sebold novel of the same name, the movie follows the Salmon family’s struggle with the tragic loss of 14-year-old Susie. Ronan acts as both narrator and spiritual force, watching as her parents (Rachel Weisz and Mark Wahlberg) self-destruct while her killer (Stanley Tucci) continues to roam unnoticed.

“A couple of times I did get upset. But when you’re working on a movie for a long time, you just have to push it to one side, really, and get on with the job,” says Ronan of handling the challenging material, which includes a chill-inducing murder scene with Tucci.

Though she didn’t read the book until after the shoot (“I was 13 at the time and I was a bit too young — the first chapter’s a tough read”), Ronan found tapping into Susie easier than one might imagine.

“She’s this normal teenage girl. She comes from a strong family unit. She’s been protected her whole life. And that was very easy to understand because I’m the same way,” explains the Irish actress, who studied with a dialect coach for a mere two weeks to nail her pitch-perfect American accent.

Born in New York but raised as an only child in rural County Carlow, Ireland, Ronan didn’t grow up with typical child star intentions. Though she staged pretend soap operas with her dolls (“Woody from ‘Toy Story’ was having an affair with Polly Pocket’s best friend — this was when I was four,” she remembers) and landed a small part at eight on the Irish TV show “Clinic” through her father’s casting agency, she came to her passion for acting slowly.

“I didn’t know until I started to do it really. It’s sort of like, ‘How do you know if you want to be a footballer if you’ve never kicked a football?’” she explains. “When I did ‘Atonement’ the level was raised. It was a challenging role for me to take because it was a drama and I was working with really talented, professional people, and I was 12. So that’s when I started to think, ‘I really love this. How can I give this up now?’”

She shows no signs of stopping: Next up is Peter Weir’s World War II-era drama “The Way Back” with Ed Harris and Colin Farrell.

But the personal consequences of her chosen career have proved a difficult adjustment. For one, she had to switch to home-schooling after her Oscar nod.

“With everyone knowing who you are, it just wasn’t working out. I wanted to go to school, but it’s not going to be that way,” says Ronan.

Indeed, the stakes will only rise with the release of “The Lovely Bones.” At the New York premiere, Courtney Love accosted Ronan to gush about her performance, much to the young actress’ surprise. And at a recent appearance on MTV’s “It’s On With Alexa Chung,” Ronan was shocked to find photographers waiting outside for her arrival.

“I got ‘papped’ in the States for the first time last night,” she says of the experience, her eyes widening. “I think it’s different when people recognize you here. I knew it was going to happen in Ireland and that was fine; it’s Ireland and it’s grand. But in the States it’s like, ‘This is actually happening for real now.’”