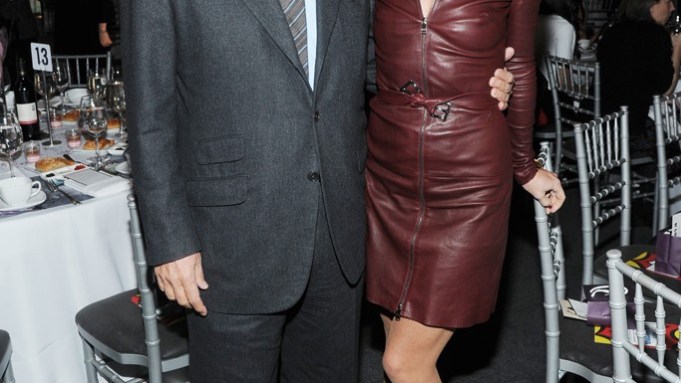 On Tuesday afternoon Larry Gagosian was at a ladies’ luncheon on the Upper East Side of Manhattan. Guastavino’s was brimming with them — Libbie Mugrabi, Ivanka Trump, Julie Macklowe, Jennifer Creel, Erica Samuels.

“There are many of his customers in the room today, I have a feeling,” Trump said. Was she one of them? “I prefer not to talk about it,” she said. OK!

When Gagosian took the podium, he wasn’t sure of his audience himself.

“Could you raise your hand if you’re an art collector?” he said. Few did. “What am I doing here?” he said half serious, half incredulous. He was relieved when he asked if they “occasionally” bought art and more hands finally went up.

Gagosian was there just to be honored for his charitable contributions to the 92nd Street Y’s arts education programs, but he turned his remarks into an impromptu Q&A session, a quickie version of one of the organization’s trademark lectures.

Gagosian isn’t known to do these often — he prefers to keep his cards close to his vest, he acknowledged — but lately, starting in Art Basel Miami Beach, he’s been unusually forthcoming with his opinions. This was an admiring crowd anyway, apparently full of potential clients, with affable questions, or, as Mugrabi put it to him, “Our guests would love to hear about how you embody the artful life.”

Mugrabi, who read prepared questions before opening things up to the floor, is herself the daughter-in-law of Jose Mugrabi, the powerful dealer who owns the largest private collection of Andy Warhols in the world and often consigns to Gagosian.

The honoree was asked first for tips on building an art collection, and Gagosian gave a dealer’s response.

“The most important thing is you want to buy [and] collect art. You actually have to like it. It has to be something you respond to instinctively or you’re drawn to it,” he said. “And whip out your checkbook because you have to actually buy it to collect it. You can’t do it by osmosis. You have to make a commitment.”

What was the next big thing?

“At these moments when the market is very, very high, I’ve noticed, having gone through several cycles, there are a lot of new artists that seem to be grabbing people’s attention. It seems there’s a genius every 15 minutes you have to own and you can’t get,” he said. “You have to be a little bit cautious when the market gets quite strong because there’s a tendency to anoint a genius artist every other day. That would be a word of advice for the collectors out there.”

More memorably, Gagosian expanded on some of those origin stories that have by now become part of his lore, like when he started selling posters while parking cars in Westwood Village in Los Angeles after he got fired from the William Morris talent agency.

A turning point for him came in the early Eighties.

“I was with Leo Castelli,” he said, referring to the legendary art dealer. “And we’re walking across West Broadway and we stop on the street and he shakes hands with somebody that I’ve never seen before. I have to tell you, not the most impressive person I’ve ever bumped into, physically looking at this guy. And I said, ‘Leo who was that guy?’ ‘Oh, that was S.I. Newhouse [Jr.]’” Newhouse, the chairman of Condé Nast, is an avid art collector. “Of course, right on the street, I asked S.I. Newhouse for his number,” Gagosian continued. “I called him the next day and invited myself to his townhouse on 70th Street, where he was living at the time, and I was blown away by the art I saw at his house and we became great friends and he became one of my important clients and he opened a lot of doors for me, along with Leo Castelli.”

As they say, the rest is history.