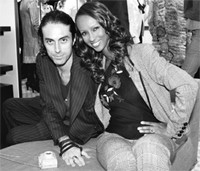 Emanuel Ungaro designer Giambattista Valli made a rare appearance at the Madison Avenue boutique last week for a lunch in his honor. Lauren du Pont, Marjorie Raein, Renee Rockefeller, Ann Jones and Iman came to check out his new set of accessories inspired by a trip to Los Angeles and Cambodia, including handbags in the shape of camcorders, compact disc players and oversized headphones, whose padded earmuffs open up to store a credit card. “Now why can’t they make these cameras so they actually work? It can’t be that difficult,” Diandra Douglas asked.

Later in the week, Tara Rockefeller, Tory Burch, Anne Grauso and Jennifer Creel joined Lars Nilsson to toast his debut collection for Nina Ricci. Judy Peabody (in Bill Blass from Nilsson’s last season with the label) admired clothing she wasn’t sure had enough tulle for her tastes — “This is definitely for the younger generation,” she said. Gigi Mortimer traded Halloween cupcake-decorating techniques with Ines Rivera.

That evening at the Night of Olana, sponsored by Yves Saint Laurent, Dayssi Olarte de Kanavos described her children’s Halloween costumes, one of which she had tried to make herself. “I can’t sew and I can’t make patterns,” Olarte de Kanavos said. “So every time I left the house, my housekeeper would fix it up for me.”

Coralie Charriol didn’t know who she was wearing —“It makes me look like Beyoncé, but I don’t have her tush” — but at least Jazz Johnson seemed comfortable in her green YSL gown, if not in her new position. “I’m the chairman of the board for Olana,” Johnson exclaimed. “I don’t know what that means exactly, but I’m the new chairman.”