Nikki Yanofsky, the 15-year-old Canadian singing sensation, will release her debut album, tentatively named "New to Me," this spring. 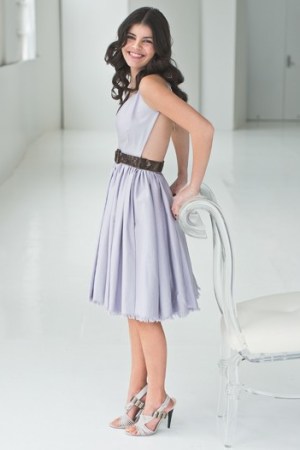 Nikki Yanofsky, the 15-year-old singing sensation, is riffling through a rack of clothes at a WWD shoot and immediately spots a pink-and-white tie-dye tulle Candela dress.

After trying it on, the Hampstead, Quebec-based singer twirls around the room, totally at ease. But, Yanofsky is decidedly less comfortable in heels as she hobbles around in studded L.A.M.B. stilettos.

VIEW THE BEHIND THE SCENES VIDEO >>

This genuine naïveté is an example of the up-and-comer’s desire to be “age appropriate,” a term she uses repeatedly over the course of an interview.

As she tries on a sheer tank, she continues, “I always think, ‘Would Selena Gomez wear that? Would Miley?’ Well maybe Miley isn’t a good example because she dresses old, but you know what I mean.”

Deciding the tank is too sexy, she trades it for a more covered-up T-shirt look. That kind of modesty is definitely unexpected, especially compared with today’s good-girl-gone-bad teen celebrities, but the petite star isn’t angling for a tarty, pop success story.

Her mother, Elyssa Yanofsky, who serves as her stylist and manager (along with her father, Richard), accompanied her to the shoot. “Nikki never wears anything over-the-top or that isn’t her,” she explains. “If anything, she says to me, ‘Mom, you’re too old for that!’”

While Yanofsky plays up her youthfulness in the fashion arena, there is nothing immature about her sophisticated, soulful voice reminiscent of Ella Fitzgerald. Her debut studio album, tentatively titled “New to Me” (Decca), hits shelves in March. A refreshing alternative to mainstream music, the jazz-pop-blues record, produced by Grammy winner Phil Ramone, features the chanteuse’s renditions of old greats such as “God Bless the Child” and “Circle Game.” It also includes Yanofsky’s own original songs, like “Thinking of Someone,” which was inspired by her first heartbreak, and “Cool My Heels,” based on slowing down when life is going by too fast.

Although she acknowledges that a jazz record isn’t necessarily expected of someone her age, she thinks the genre has helped her become a different kind of artist.

“A lot of mainstream music today is very one-dimensional, and I think jazz has made me more intriguing,” she says.

Her musical influences include Stevie Wonder, Aretha Franklin and Marvin Gaye, but her main inspiration will always be Fitzgerald. “When I first heard ‘Airmail Special’ and ‘A-Tisket, A-Tasket,’ I was like, ‘Whoa! How does this girl do that?’” she says. “She introduced me to jazz, and I owe her so much.”

Further evidence of her old-soul mind-set: Yanofsky switches off Lady Gaga’s “Bad Romance” on set in favor of Bob Dylan’s “The Times They Are A-Changin’” and Billy Joel’s “She’s Always a Woman.” That’s not to say she doesn’t follow top 40 hits. She has collaborated with a range of artists, including Will.i.am, Wyclef Jean and Feist.

Taylor Swift and Beyoncé Knowles are two artists she especially admires. “Taylor’s words are really catchy and fun to sing along with, and Beyoncé is a great of our generation,” Yanofsky says. “She really had the discipline, drive and passion to make it.”

The same could be said for Yanofsky herself, who began singing as a toddler and got her professional start at age 12 after a few local gigs led to an introduction with Montreal Jazz Festival founder Andre Menard. Menard booked her to open the festival in 2006 and, since then, the singer has performed there yearly to sold-out crowds.

Her favorite performance to date was in July when she closed the festival during a torrential downpour. “In the middle of the show, it started raining like cats and dogs, and no one left! It was the most amazing experience,” she says.

Yanofsky has also showed off her pipes at Carnegie Hall, Lincoln Center and The Kennedy Center, and her 2008 live tribute album, “Ella…of Thee I Swing,” was nominated for two Juno Awards, Canada’s equivalent to the Grammys.

Despite her early accolades, Yanofsky is low-key about her success. “I don’t view the opportunities that come to me as, ‘Oh my gosh, this is such a huge deal,’” she says. “You have to have confidence in what you’re doing and I really feel like I was put on this earth to sing. I’m not doing this to be famous, I’m doing it because I love the music, and that’s how I know this is right for me.”

While singing is Yanofsky’s first love, it’s clear that fashion is a close second. “I love shopping! I’m a total shopaholic,” she says. “My closet is overflowing right now, so I have half my dresses downstairs in another closet.”

A fan of Marc Jacobs, Chloé and Topshop, Yanofsky favors a casual, boy-meets-girl style. To wit, she will pair lace dresses with Pink Floyd Converse and wear military boots with ripped floral tights. “Opposites attract, and I like mixing it up,” she says with a giggle.

As for her sweet 16 birthday party in February, Yanofsky won’t be donning a fluffy pink party dress like many of her peers. Rather, she is opting for a more sophisticated look: a black, one-shoulder Rag & Bone dress with Miu Miu cage sandals.

“Everyone expects you to wear something that’s going to pop for your 16th, but I wanted to go understated,” she says.

Certainly Yanofsky’s tastes require a grown-up budget, but the singer stresses that she is judicious with her spending. “If I have my eye on something like a Marc by Marc [Jacobs] bag, I would feel spoiled if my parents got it for me,” she says. “Instead, I’ll buy it with the money I earn.”

With the focus on her burgeoning career, it’s easy to forget the normal, teenage activities that preoccupy Yanofsky’s life. She fills her time skiing (“bumps, jumps and rails are the best. I’m very serious about it”), watching “iCarly” and creating silly videos for YouTube with her best friend, Erin (one example: the two of them jamming out to The Beatles: Rock Band).

“I’m still a kid, you know,” she says, only half kidding.

And, of course, she has the requisite teen crush on Robert Pattinson.

“I came out of the theater screaming when I saw ‘New Moon,’” she says. “I just flipped out! I’m so in love with him!”

Although the two haven’t met yet, Yanofsky did ask Pattinson via the E network in Canada to be her date to this past year’s Juno Awards. The brooding star didn’t get to attend, but sent his avid fan an autographed photo saying, “Nikki, sorry I couldn’t be your date.” She glows when recounting the event, “I was like, ‘Oh my God, I have to meet him! I have to marry him!’”

SEE THE VIDEO OF NIKKI YANOFSKY AT HER WWD SHOOT >>