Breaking bread with Sirio Maccioni, the legendary owner of Le Cirque, who now has four other restaurants and shows no signs of slowing down. 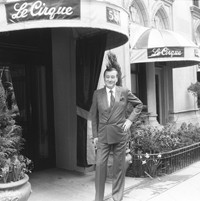 NEW YORK — “We have 350 reservations tonight,” Sirio Maccioni boasts, seating himself at one of Le Cirque 2000’s prime tables as the lunchtime crowd thins. Celebrating 30 years this year, the legendary restaurant Maccioni, opened on East 65th Street with a $150,000 loan from the Chase Bank branch on East 64th, has grown beyond its Upper East Side roots. Maccioni’s empire now includes the revamped Le Cirque 2000, which opened on Madison Avenue in 1997 after the original closed, as well as Osterio de Circo in New York, Tre in Las Vegas and Le Cirque in Las Vegas and Le Cirque in Mexico City, all run by Maccioni and his sons, Mario, Marco and Mauro. And Le Cirque’s famous ringmaster shows no signs of slowing down.

Oscar de la Renta and Bill Blass were just two in the tony crowd that descended on Le Cirque during its fabled opening night in 1974, and the restaurant has drawn power players — from Barbara Walters to Donald Trump, Imelda Marcos to Ronald Reagan and Henry Kissinger to Richard Nixon — ever since. Besides a heartily haute menu and a fabulous crowd, Maccioni claims frivolity is the lure. “People want to go to restaurants that are fun,” he says simply.

And according to Maccioni, for New Yorkers, nothing is as fun as wrestling a good table from the maître d’. “That was the mistake my friend, Ducasse, made,” he notes, shaking his head at the unhurried dining policy in effect at Alain Ducasse on West 58th Street. “He said, ‘You can have the table for the evening,’ but people want to fight to have a table.”

Still, Maccioni believes in high-style dining. While most restaurants in town have eased dress code restrictions, at Le Cirque 2000, Maccioni has maintained a strict standard. “I’m one of the only restaurants that requires jacket and tie,” he announces, before launching into a story about the time Dustin Hoffman wound a shoe lace around his neck in lieu of a tie and the night once-upon-a-time when an aggravated Frank Zappa donned a suit to dine there for the first time.

Of course, if Maccioni’s rules are old school, he learned from the best while working as the maître d’ at New York’s famously chic Colony restaurant. “The Colony was the world,” he sighs. “It was a good restaurant with simple food, but it attracted a certain kind of people — cafe society.”

Maccioni dutifully took the reservations. Then the owner told him that every caller had designs on the same table, the best one, the corner table. Sinatra arrived first and snagged the prize, while Maccioni shuffled the rest of the star guests, many fuming, to lesser locales. “At 1:30, I thought, ‘My god, I made it,’” he recalls. “Then Cary Grant and Bill Baldwin came in.” Exhausted, Maccioni led the pair to a private table behind a Japanese screen — his last — and told his assistant, a pretty boy named Franco, to look after them. “After 15 minutes I heard screaming,” he remembers. “My assistant said, ‘They’re touching me behind the screen,’ and I said, ‘Well, let them touch. We don’t have any other tables!’”

Many of the Colony’s fabled clientele, including Jackie O and the Kennedy clan, followed when Maccioni struck out on his own to open Le Cirque, a restaurant catering to both the haute and the newly health conscious by serving broiled fish and salad. Sinatra became a frequent guest and left Maccioni with a note that read ‘yes’ or ‘no’ after every meal there to rate the experience.

But while Maccioni found Sinatra and his reviews amusing, he has less tolerance for the reviewing staff at The New York Times, one of whom, he claims, once walked past a box of truffles and mistook them for moldy potatoes. “The New York Times came in and took a star away, then the next year they gave it back,” Maccioni sighs. “When a reviewer has an ugly wife, he can never be very good.”

During the past three decades, Maccioni has basked in the glow of good reviews and stuck it out after suffering a bad one, all the while maintaining a love-hate relationship with the restaurant business. “You go to bed at 2 a.m. and you get up at 7 to come here again at 9:30,” he says. “People say you’re lucky, but we work 14-hour days.” Maccioni tried to convince his three sons to seek their fortunes elsewhere, but they followed him into the business. “I wanted doctors and lawyers, but they all sell soup.”

After World War II, Maccioni was one of the first Italians to return to Paris, where Yves Montand, who grew up on the same street in Tuscany, helped the teenager find his way. “I was staying at his house, but I didn’t realize how important he was,” says Maccioni. Through Montand he landed a job at the Folies Bergere, frolicking onstage with the cast during the big finale. “I was very skinny, so they put me in an Egyptian tunic,” he remembers. “Everybody was impressed, including the prima ballerina. She called me Italianito.”

Outside of the theater, however, life in France could be tough for an Italian kid on his own. “The French were the allies, the Italians were the enemy,” says Maccioni. “In Paris, they’d say, ‘He’s Italian, but he’s very good.’”

Yet, when it came time to open a place of his own, Maccioni chose a French name, Le Cirque. “Some of my best friends are French,” he shrugs. Then again, with its Italian owner, French name, worldly menu and splashy American decor, Le Cirque defies easy categorization. “Le Cirque is a New York restaurant,” Maccioni muses. “It could not exist anywhere else.”