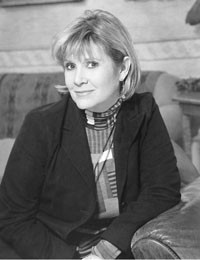 NEW YORK — Carrie Fisher doesn’t write memoirs. “I’ve never been able to. I don’t have a good memory,” she explains in a telephone conversation while in town to promote her new novel, “The Best Awful” (Simon & Schuster). “Besides, life doesn’t fall out like an entertainment. And I figure people will know. People always know my books are autobiographical.

“Those people who write memoirs,” Fisher goes on, “they remember things from like when they were three, and I don’t. I always find that truth is a stern taskmistress, and I can’t adhere to it.”

Her 1987 work, “Postcards From the Edge” — for which the actress created her alter ego, Suzanne Vale — was a thinly veiled account of Fisher’s own drug addiction. The just-released sequel follows Vale’s submersion into manic depression and what happens when her husband, the father of her daughter, leaves her for a man. In 1993, the agent Bryan Lourd, the father of Fisher’s daughter, Billie, left her for a man, and in 1997, Fisher spent some time in a mental ward after an allergic reaction to psychiatric medication.

It’s not an easy history to reconcile, and writing fiction, Fisher says, gives her a certain distance from the events of her life. “I can’t f–k with reality at the time, so it’s so nice to be able to do it after the fact,” she says. “We’re never able to — it just f–ks with us. Especially this reality that I had, this time.”

Dealing with — and writing about — mental illness, however, was a bit of a challenge for Fisher, who infuses her work with pathos as well as an incomparably wry sense of humor. She found writing about her drug addiction over a decade ago to be easier.

It took the former Princess Leia seven years to finally come out with the truth, or at least a fictional account of the truth. “I wanted to wait until it was funny,” Fisher says. “And it took a couple of years for ‘mental hospital’ to be funny. For me to say that my mental illness was infectious and I caught it from a toilet seat, blah blah blah. Before that, it’s not funny. It’s painful, maybe. But then it became material, and I enjoy that it’s a bit shocking to other people. Should that be embarrassing?”

Though Fisher says she prefers writing to acting, she’ll occasionally do a cameo in a feature film. Recently, however, she’s found herself cast as a nun in both “Charlie’s Angels: Full Throttle” and “Jay and Silent Bob Strike Back,” a bit of an odd fit for a former drug addict.

“I can’t figure it out,” she says. “You know I do have this very formal thing, but otherwise, I can’t help you there.” The “Charlie’s Angels” movie was for her daughter: “Most of the time she says to me, ‘Mother, that is so random,’ so would you skip an opportunity for her to be impressed?”

One of the downsides of manic depression, Fisher insists, is not being able to get Botox. “I can’t wear it because then if I had a manic or depressed mood, you wouldn’t know,” she sort of jokes. As for dressing up, “I’m 5-1 1/2, and I totally missed the boat on being given clothes, which is my tragedy. Actually, if only that was my tragedy.”

But it’s Joan Rivers that really gets her goat. “Where does that come from? Joan Rivers is telling anybody to wear something? I don’t understand the credentials or the credibility or any of it. It’s not funny, it’s cruel, and it’s coming from her. She’s a talk-show hostess.” (Fisher much prefers the “What Not to Wear” feature in Us Weekly.)

And though Fisher was recently featured on “Celebrity Poker” on Bravo — she’d never played the game before — don’t expect it to come up in a future novel, or to jump-start a gambling addiction. “I never saw the point of gambling. Shopping, yes. Gambling, no,” she says. “My stepfather lost $3 million in a card game once. It’s absurd, but in keeping with the rest of my life.”