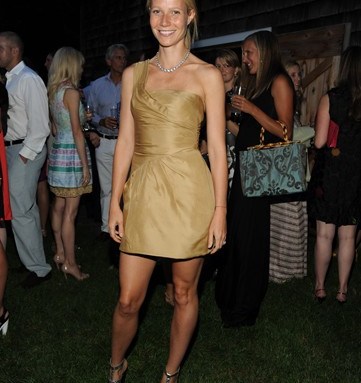 Everyone is cutting corners these days. And the charity circuit is no exception. Saturday night at her annual Baby Buggy summer fundraiser, this year a dinner held at her Amagansett home, Jessica Seinfeld made no bones about the economic strain on her party-planning.

“We’re working on two thirds the budget of last year,” she explained, simply. “My builder donated the floor; Angela [Giannopoulos, the event planner] donates her time.”

The belt-tightening was in little evidence, though. The gray serpentine tables were decorated with lush red dahlia arrangements and “$40,000 worth of Georg Jensen silver (courtesy of the luxury house); hors d’oeuvres included grass feed beef pigs in a blanket and lobster beignets, and the evening’s sponsor Porsche, rolled in three of its latest, Panamera models, the cheapest of which goes for a cool $89,800. Chips and dip this was not.

And guests like Gwyneth Paltrow, Mariska Hargitay and Peter Hermann, Christy Turlington, with sister Erin in tow, Beth Buccini, Sarah Easley and Rocco DiSpirito all turned out to show their support, sipping cocktails in the Seinfelds’ barn and navigating the lawn, some in challenging footwear. “I’m sure it’s good exercise‹it’s calf-building,” said one woman in teetering heels to her similarly-clad friend.

There were even a few designers in attendance, taking a break from their August rush.

“I love to support what she started,” said Narciso Rodriguez.

“I’m not sleeping,” admitted Jason Wu. ‘I have my computer and sketch pad with me [this weekend]. The wheels are always turning.”

A low-key Paltrow (who declined interview requests) huddled with Seinfeld and Turlington, sipping a martini, while others checked out the three cars on display, which came complete with model-esque spokeswoman.

“I think I just scared off the Porsche guy when I told him I drive a Prius,” confided one guest as she snuck away.

During the seated dinner of chicken and shrimp kebabs and mac & cheese, Jerry Seinfeld serenaded attendees as his children Shepherd, Julian and Sascha (just back from sleep away camp) looked on.

“After the second one of these, I said, ‘That’s enough. I can’t take the people and the cars.’ As you can see it’s horrible,” he quipped. “[I said to Jessica] ‘There’s only one way I’ll do it again. If you can get my favorite car company to sponsor the event and bring their latest cars to our home and then leave them here, I’ll do it again.'”

Anything in the name of his wife’s cause.

“It takes from the rich and gives to the poor,” he summarized to much laughter.

“We have much more eloquent ways of speaking about what we do,” Jessica shot back.