The nine members of the Supreme Court have become the new high-society superheroes. 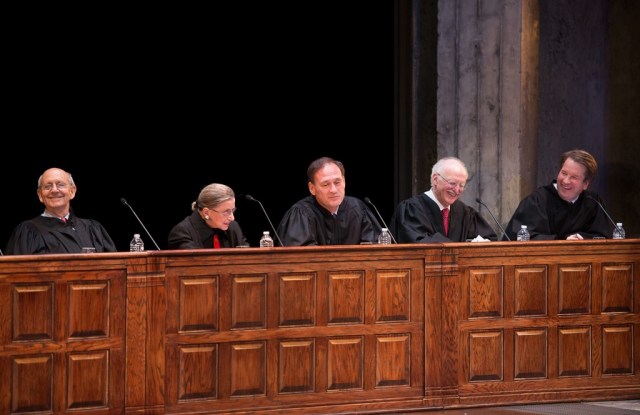 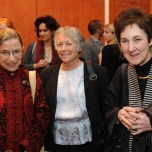 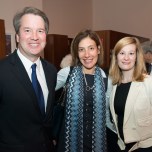 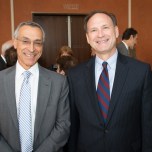 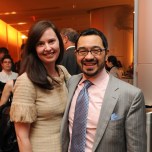 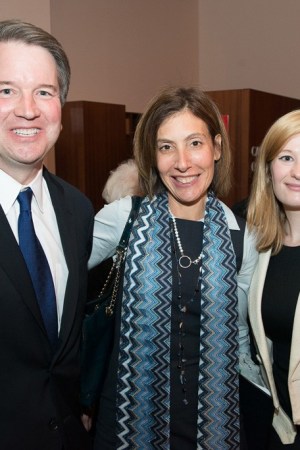 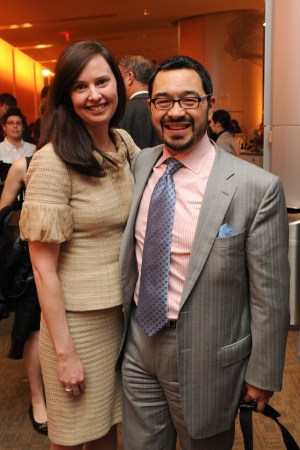 Washington has a new gang of celebrity power guests. Unlike Hollywood darlings, media stars or visiting royals, no one questions their intelligence, seriousness or stamina.

They are the nine justices of the Supreme Court.

By all accounts, the nation’s ultimate adjudicators make great party guests once they shed their black robes. At the Kennedy Center annual gala, the Opera and Symphony balls, on Embassy Row, in private homes, and at the National Gallery and Phillips Collection, they are the new high-society superheroes. When it comes to joining forces to celebrate culture without the benefit of a divisive policy issue to rally support, a Supreme Court justice has the social clout to rally a must-attend, A-list event.

With its majestic Corinthian columns and white marble facade, located just across the street from the U.S. Capitol, the court is creating its own high-culture social universe. Hosting musical performances and theatrical interludes, reaching out to Congress, friends and supporters, the justices are adding the role of high-culture savior to their ever-growing list of unprecedented new powers.

No question the nine justices are draped in power. And unlike politicians who come and go, Supreme Court justices serve for life. They don’t have to worry about negative publicity for savoring high culture, D.C.-style. Nor do party hosts have to fret that their favorite theater, symphony or opera supporter will suddenly be voted out of office.

“These days Congress doesn’t go out much socially, and hardly ever do any of them go to the theater,” says Michael Kahn, artistic director of Washington’s Shakespeare Theatre Co. Kahn is among the first cultural leaders to call on the Supreme Court to help build support for his venue. Starting in the Nineties, when he teamed up with Supreme Court Justice Anthony Kennedy, once a year he hosts a sold-out Mock Trial special event where justices take the stage to decide cases involving Shakespeare’s plays and plot lines.

Ruth Bader Ginsburg, who presides as chief magistrate of the Mock Trial tribune, recalls taking over after “Justice Kennedy presided over a case of whether Hamlet was competent to stand trial for murder at the court.” Since then, top D.C. trial lawyers have joined in to argue the finer points of law in made-up cases such as Iago being put on trial for the murders of Desdemona and Othello; Malvolio for whether he was entitled to $10 million in damages for wrongful imprisonment, and Hamlet questioning an insanity plea for his murder of Polonius. The arguments take place before a packed crowd of Washington lawyers who cheer, hiss and vote before gathering for cocktails at the end of the evening.

“The Supreme Court gets very involved in the theater,” says Kahn, who confides the justices are known to hand out their own reciprocal invitations. Over the years, Kahn has been invited to lunch in the Supreme Court’s private dining room. Kahn is not the only one. “I remember when Rusty Powell [director of the National Gallery of Art] joined us for lunch,’’ says Justice Samuel Alito.

The new supersocial court is filling the void once occupied by conservative senators like Orrin Hatch, who used to hang out with the late Massachusetts liberal Sen. Edward Kennedy, or Speaker of the House Thomas “Tip” O’Neill, who was friends with conservative icon President Reagan.

“Justices Samuel Alito and Ruth Bader Ginsburg, no matter what divides them politically, they are famous for their sociability and their sense of humor,” says Kahn.

“We’re more social because we have more women,’’ says Justice Stephen Breyer, who credits his predecessor, Sandra Day O’Connor, with giving him the necessary advice to survive the D.C. social scene. “She said to watch what you say and stay out of politics.”

As the first woman appointed to the court and a socially adept Junior Leaguer, O’Connor gets credit for social trailblazing even though her own introduction to after-hours Washington was anything but courtly. Invited to the 1985 White House Correspondents’ Association dinner, O’Connor was seated next to Washington Redskins fullback John Riggins. Noting the justice’s reserve, and having spent the night drinking, Riggins told her, “Come on, Sandy baby, loosen up. You’re too tight,’’ before passing out on the floor during then-Vice President George H.W. Bush’s remarks.

Everyone agrees the court has done a lot to loosen up. “These days, they’re all writing books, and with so many speaking outside the court, we all get the benefit of their sense of humor and their famous sociability,” says Kahn.

“Everyone takes their cue from the Chief Justice,’’ says Republican veteran Wayne Berman. “John Roberts goes out a lot.” This spring, Roberts attended the Opera Ball and a dinner party hosted by his former boss, Fred Fielding, who served as White House Counsel to President Ronald Reagan. He also turned up at the Metropolitan Club, one of Washington’s oldest private institutions, to welcome new members.

Sharon Percy Rockefeller, whose husband Jay Rockefeller is stepping down from his West Virginia Senate seat, praises O’Connor for not following her own advice after retiring from the bench. “She’s doing a great job writing books and recently by questioning whether the Supreme Court may have erred in weighing in on the 2000 presidential election,” says Percy Rockefeller, referring to the court’s decision tipping the election to George W. Bush rather than Al Gore.

For some conservative Republican newcomers to Congress, eager to party if only someone would invite them, the Supreme Court fills a void created by the White House’s closed campus atmosphere. Two-term Rep. Gregg Harper (R., Miss.) wasn’t around for the days when the White House would host summer barbecues for Congressional members and their spouses when the President would join the crowd and mingle. This year, the Supreme Court provided a venue for a party for Congressmen and their spouses.

“It was a great party,” recalls Harper. “Several of the justices, including Chief Justice Roberts, came in to greet us.”

Debbie Dingell, wife of Rep. John Dingell (D., Michigan), Congress’ longest-serving member, agrees the Supreme Court is becoming lots more social than ever before. “Stephen Breyer was the first to go out a lot,” says Dingell, who points to Sonia Sotomayor, the only single Supreme Court member, as the justice who has done the most to loosen up the court’s social footprint. “She came to town, got herself an apartment and goes out dancing at night,” says Dingell.

“Federal judges are good guests because they listen well, and everyone likes a good listener. There’s another reason Supreme Court judges make good dinner guests: When they are there, people tend to be very polite,” says Deecy Gray, a popular Republican hostess who is married to Douglas Ginsburg, a federal appeals court judge and regular member of the Shakespeare Theatre’s Mock Trial tribunal. Both conservatives, the couple has entertained the longest-serving justice, Antonin Scalia, 77, appointed in 1986 by Reagan, as well as the newest and youngest court member, 53-year-old Elena Kagan.

Breyer, who is married to a psychologist who is the youngest daughter of a British viscount, showed his social skills at Ambassador Salem Al-Sabah and his wife Rima’s June fund-raiser honoring Secretary of State John Kerry and actress Catherine Zeta-Jones. While 150 guests scrambled to take their seats, Breyer, who had already taken the trouble to check his table placement, huddled with the ambassador asking for information about his dinner partners, who turned out to be the wife of the new Japanese Ambassador and Puneet Talwar, President Obama’s top Middle East adviser.

Jo Carole Lauder, chairman of Friends of Art and Preservation in Embassies, appreciates Breyer’s sociability. FAPE honored him at last year’s State Department dinner for his work with artist Ellsworth Kelly on the Boston Courthouse. “He’s bright and charming,” says Lauder, noting that, in return, Breyer “invited a group from MoMA to the Supreme Court, where he gave an informal talk about how the court worked.”

Ginsburg, the oldest member of the court and a music lover, hosts two invitation-only Supreme Court musical performances every spring and fall, inviting artists in for a 3 p.m. performance attended by about 200 guests. Ginsburg, who inherited the job from Sandra Day O’Connor, welcomed Barbara Cook onstage in May.

A regular guest at the National Symphony and Opera balls, Ginsburg celebrated her 80th birthday in March at a Kennedy Center reception after opening night at the Washington National Opera. For now, though, she’s swearing off the social scene — work comes first. “Now to the end of June we spend writing and rewriting opinions. It is a most contentious, impossible time,” says the justice, referring to the closing days of the court when the final, thorniest issues are being debated.

Once those final decisions are handed down by the end of June, the justices — like most of Washington — escape for the summer. Justice Clarence Thomas is known for his low profile, but come July once the back-room fighting ends, he’s no recluse. The more sociable Roberts takes a different tack. “In the summer Justice Thomas travels around with his wife in an RV, a big customized bus,’’ says Linda Greenhouse, journalist in residence at Yale Law School and veteran Supreme Court analyst. Roberts, she says, “decided he wanted some kind of summer getaway, chose an island off the coast of Maine, superprivate, very small, you need a boat to get there. So no one can bother him.”

As social as many of the justices are, there are still some who eschew the circuit. “David Souter never accepted any social invitations to my knowledge,” says Greenhouse, looking back on her years covering the court. “He was never seen at dinners, or Kennedy Center galas, or the Shakespeare thing. I asked him about it one time, and he had a very clear sense that the only reason someone invites a Supreme Court justice out socially was to aggrandize themselves, to say, ‘Look who I snared.’ They want you for some purpose beyond yourself. And he saw no reason to play.”

D.C. philanthropist Adrienne Arsht disagrees with the retired justice’s analysis. Considering her friendship with O’Connor, she says, “She stayed at my house in Miami when she came down to swear in a court judge. We went to the ball game. I threw in the first ball. She handed it to me. She was a friend of my mother’s, and I gave her my mother’s lace collar. She’s a friend, but it’s not because I want to have a Supreme Court justice at one of my parties,” says Arsht.

Whatever the motivation, Washington socialites and Supreme Court justices have no intention of scaling back their fun. “Judges and justices by and large are isolated in their lives,” says Sanford “Sandy” Ain, Washington’s leading divorce attorney, who once turned down a judgeship. Aside from the drop in salary, he says, he didn’t want to cut back on his social circle to avoid partying with anyone who might appear before him.

“But in the Supreme Court you have a very discrete number of people who practice before the court,” he explains. “Everyone follows what the Supreme Court judges do, where they appear, and what they say. And right now, they represent one of the most important branches in our government.”