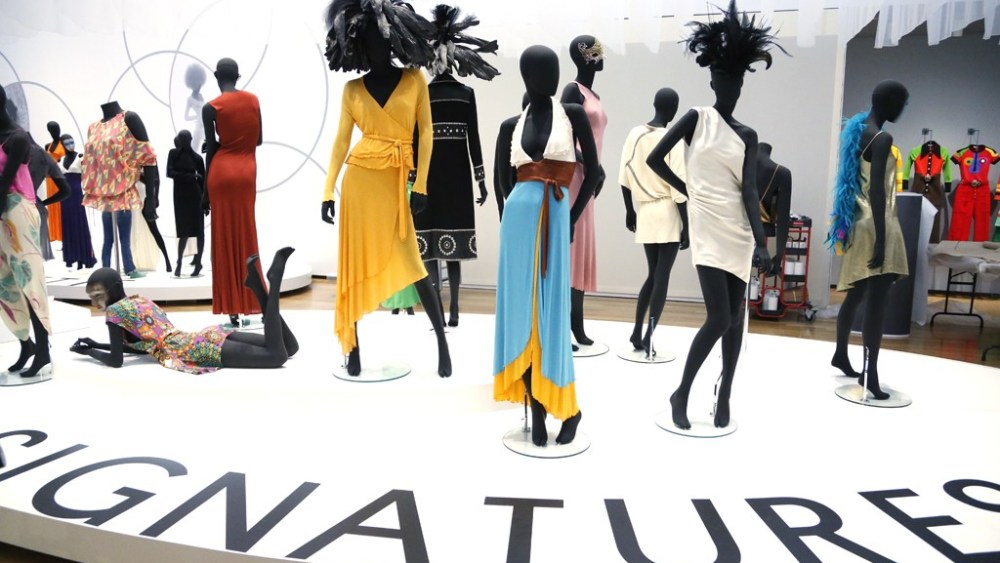 Stephen Burrows made sure that The Supremes’ “Up The Ladder to the Roof” will be piped into the retrospective of his work that bows Thursday night at the Museum of the City of New York.

Aside from it being a favorite song he liked to blast, it could double as an anthem for his career. Fittingly, the exhibition is called “Stephen Burrows: When Fashion Danced.” And dance he did, regardless if it was to Motown, rhythm and blues, New York sound or rock ’n’ roll. The music, like the up-until-dawn club scene he was once part of, has fueled his creativity as much as the buzz and street life he finds so stimulating about New York City.

As 25 helpers scrambled about on Tuesday afternoon pinning muslins, rolling on photographs like wallpaper and setting display text, Burrows did not seem to be the least bit wistful, frazzled or reflective about being surrounded by his past. (Never mind that he has spent the better part of the last six weeks helping to track down and select 50 pieces for the show.) Other flashbacks could be heard loud and clear in a documentary about the 1973 “Battle of Versailles” between French and American designers, of which Burrows was one. “It’s humbling to have so much attention. Usually something like this doesn’t happen until you pass,” he said. “Being successful is being happy in what you’re doing and being able to make money at something that you love to do. I can’t imagine anything that makes you happier than finding true love.”

Born in Newark to divorced parents, Burrows has always thought of himself as “bicoastal” in that he always traveled between his mother’s New Jersey home and his father’s Harlem one. After graduating from the Fashion Institute of Technology, his senior co-op job at the missy blouse company Weber Originals turned into a full-time one. “I was making $125 a week. That was a fortune back then,” he said.

By 1968, he had ventured out on his own thanks to private clients like the Brazilian artist Jim Valkus, Bobby Breslau and Roz Rubenstein. In 1970, his Fire Island friend Joel Schumacher — a Henri Bendel-er before he hit Hollywood — suggested he meet with the store’s then-president Geraldine Stutz and a 12-year alliance was formed. Hardworking as he was, Burrows ran with a fast crowd, including Pat Cleveland, Alva Chinn, Halston, Joe Eula and Elsa Peretti. After an after-dinner nap, Burrows would get up around 11 to hit the clubs with his friends — The Loft, Sanctuary and others. At 3 or 4 a.m., they would head home for a few hours sleep before going to work. Burrows said, “We didn’t really talk about fashion unless to tell someone we loved what they were wearing that they had made. It was mostly about dancing and the nightlife. Music was a big force.”

Alcohol and drugs were other forces too, though Burrows didn’t go into detail about those aspects of the period. “We were a product of the times. All that stuff was around, available and taken into account when needed,” he said.

Standing in the Target-sponsored Commune section of his retrospective, which plays up his disco-era rainbow-colored designs, Burrows said he is partial to the early days. The show opens with a colorful photo of Grace Jones snarling opposite a black-and-white one of a bespectacled Burrows wearing a Jell-O printed shirt. Eyeing an image of his first photo shoot in Central Park in 1970, Burrows said the Seventies were all about freedom of expression. That same year he became the first African-American designer to win a Coty Award. “It didn’t matter who you were with as long as you were happy,” he said. Gesturing towards framed sketches and vibrant knitwear, Burrows said, “I’ve always had a thing for phallic symbols. It’s kind of a signature.”

Others know him for joining Halston, Bill Blass, Oscar de la Renta and Anne Klein in the “Battle of Versailles,” the legendary fashion showdown with Yves Saint Laurent, Christian Dior, Hubert de Givenchy, Pierre Cardin and Emanuel Ungaro. “It was such a proud moment for American fashion,” Burrows said. “Of course, when we did it, we didn’t think about it that way.”

He recalled sitting beside Blass in first class as they flew to Paris for the show. “We didn’t know about the party the models were having in the back of the plane,” said Burrows. Nor did they know the figurative drawings Eula had spent hours sketching in New York would not fit to scale Versailles’ vaulted ceilings. “The Eiffel Tower he drew looked miniscule,” Burrows said. “The room dwarfed the scenery. We had to use a bare empty stage. The situation, we thought, was kind of hopeless. But it turned out to be such a knockout.”

Meeting Josephine Baker — “divine in a catsuit looking like she was naked” — and Saint Laurent were Versailles snapshots he will never forget. “Saint Laurent came up to me and said, ‘You make beautiful clothes,’” Burrows said. “He was sitting in the next booth at the event. The designers weren’t allowed to be with the clothes during the show.”

As for the current designer scene, Burrows rattled off Rick Owens, Lanvin and Jean Paul Gaultier as three favorites. Less enthusiastic about younger designers, he said, “I don’t understand what’s happening with fashion today. It looks very added-to, like everything in the kitchen sink. But that’s just me.”

Celebrity designers don’t hold his interest either. “They come up and just die. There are all these celebrity lines and in 200 days they’re gone. Meanwhile, someone else who does design can’t get going,” Burrows said. “The word ‘designer’ is so loosely used today. Of course, I don’t know what the cure for it is. It’s an animal in its own right.”

Asked about the lack of non-Caucasian models on many designer runways, Burrows said, “I find it peculiar, because part of their customers are not Caucasian. I don’t know that it will ever change. I always use and will always use all different girls.”

Minority designers also still struggle to get financing. “It’s particularly difficult for the minority designers. I don’t know why that is. I find it curious. It’s something that minorities will always be facing.”

At its most profitable in 2006, Burrows’ label was a $2 million business, but there have been fits and starts along the way. After running his own company from 1970 to 1982, he shuttered the doors and bowed out of the limelight. Caring for his cancer-stricken father and brother consumed most of his time, though he continued to create clothes for private clients and design costumes for the off-Broadway show “Momma I Want to Sing.” In 2001, Henri Bendel convinced him to come out of retirement and the following year he set up his own studio on 134th Street to relaunch his label. By 2008, he subletted space on West 37th Street — a few blocks from where his grandmothers first met as sample hands for Hattie Carnegie in the Twenties.

In August, Burrows had to deal with the blow of losing his business partner of 15 years, John Robert Miller, who died unexpectedly. Now he and the brand manager Mary Gleason are speaking with potential investors and hope to have new financing in place for a spring 2014 collection. Occasionally he designs for private clients “but not so much because I hate sewing,” Burrows said. “I’ve never had the patience for sewing. It’s terrible — I can’t sew a straight line.”

As for how he sees his role in the fashion world, he said, “The essence of Stephen Burrows — be happy when you’re in the clothes and have fun with what you’re wearing. I’m very simplistic about things like that. That’s just how I am.”