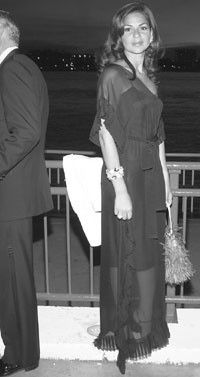 Given the balmy night, the collection of Upper East Side lovelies who headed to Chelsea Piers for the Henry Street Settlement dinner dance on Tuesday shelved their fur chubbies and opted for showing off their newly bronzed limbs. Pilar Crespi Robert arrived in heels — the first time she’d ever worn them, she claimed — while co-chair Eva Lorenzotti sported a tan from a weekend in Miami at the Ritz-Carlton with fellow Euro-socials. “We did some really silly things,” enthused Lorenzotti. “We laughed a lot. I think that keeps you young.”

Amid the summery frocks worn by Rena Sindi, Marisa Noel Brown and Zani Gugelmann, Vanessa von Bismarck stood out in a purple two-piece Halston tunic and pants number. “I tried on a bunch of dresses, but this was just so comfortable,” explained von Bismarck of her chic yet loungy ensemble.

At the Armani-sponsored Spring BAM Gala in Brooklyn, Glenn Close took in the Lyon Opera Ballet — a sort of Cirque du Soleil meets ABT — with Milos Forman as well as the artists Christo and Jean-Claude. During the dinner following at the Brooklyn Museum of Art, Close expounded on one of her favorite Manhattan museums: Madame Tussauds in Times Square. “Have you seen George Washington in there?” she asked. “George Washington is hot.” But she had a bit of advice for Barbra Streisand about her figure: “She might want to go in and have that melted down.”