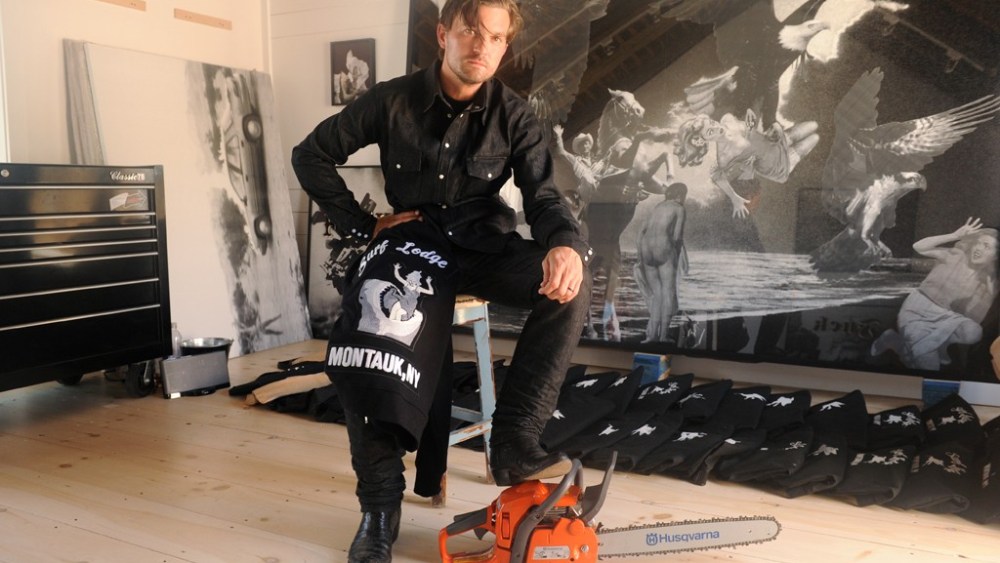 “Good old Canadian tuxedooooo,” Max Snow grins, adjusting the collar on his nearly black denim work shirt (which he has paired with a pair of selvedge jeans). It’s the morning after the Fourth of July and the photographer, curator and fixture of the New York art and fashion worlds is planted squarely on a bar stool at the center of his new studio space at the Surf Lodge in Montauk, N.Y. It’s an airy appendage on the southern tip of the out-east hotel. There’s a stack of bubble-wrapped canvas resting against the wall in one corner, an ashtray brimming with snuffed-out Marlboro Reds sitting atop a nearby tool chest and an alarmingly orange chain saw lying in the middle of the floor.

Though it may look out of place at the 20-room hotel — a go-to destination for a certain breed of Manhattan-based weekend warrior between Memorial and Labor Days — there’s a good explanation for the chain saw. Snow’s grandmother had a couple of trees on her property in Sag Harbor’s Barcelona Point that needed chopping.

“Well someone has to take care of grandma, am I right?” he shrugs with a bit of false modesty as he tucks a cigarette behind his ear. Snow, 29, is the progeny of the de Menil dynasty, whose philanthropic contributions to the art world are virtually unrivaled. Said grandma is Christophe de Menil, art-world royalty. (Though once estranged, Snow and de Menil recently reconciled.)

At the moment, Snow is quite literally surrounded by the fruits of his labor — posed for the sake of a portrait shoot. His latest series of artwork, titled “Highway of Tears,” hangs on the walls. A heap of canvas and leather totes of his design are splayed across the floor.

“I actually just silk-screened these,” he says, looking over the pile. “They just finished drying.”

The totes are one component of his limited-edition capsule collection for the hotel, Max Snow x Surf Lodge sold on-site and online starting today. Retailing between $55 and $525, the collection spans from wool baseball caps to cashmere hoodies and has Snow’s mark all over it. His involvement with the project was all-encompassing. He can, and does, speak thoroughly about the direction of each piece. “It’s very stiff and thick and sturdy, but it’s something that will take on your shape over time. It wears in like leather almost,” he says of the denim shirt. “Vanessa’s wearing it a lot, which I think is the best compliment.”

That would be Vanessa Traina — perpetually chic stylist, pal of Alexander Wang and Joseph Altuzarra, daughter of Danielle Steel and, as of last year, Snow’s wife. The artist’s emergence on the fashion scene is not just the by-product of the inherent confluence of the art and fashion worlds, but also his better half.

Almost exclusively black and cream with a focus on texture and fabrication, the lineup is very much in line with Snow’s own sartorial sensibilities: that elusive brand of subversive-without-wanting-to-be-subversive, quiet cool.

“I drew from an old-school biker, surf vibe. But I mean, I guess I stole from my own aesthetic, too,” he says of the range. “My closet is sort of like Pee-wee Herman, you know? It’s like all the same thing over and over again. It’s all many pairs of black jeans and all black T-shirts and sweaters.”

Currently, he is in a black tissue-thin pocket T-shirt, selvedge jeans and crocodile cowboy boots. A few minutes later, he hops into his Ford pickup (read “hops” quite literally, as it’s generously lifted off the ground) to get brunch nearby. His truck is black with an all-black interior. “I like to keep the palette very monochromatic because then everything matches and it makes life that much easier. But then it’s more about quality and texture and fit,” he says.

“I’d never designed clothes for anyone else before, but I often do for myself because I can never find things in stores, for the most part, that I like,” he says behind the wheel now on the drive over. “So when I was tasked to make some clothes, I got more and more excited the more I got into it.”

The capsule is the latest manifestation of Snow’s partnership with the Surf Lodge, which is hosting him as part of their just-launched artist-in-residency program in which they provide a studio space and room for a selected artist for the summer. Snow has been putting the residency to good use: He threw a weekend-long kickoff fete in June with performances by Willie Nelson and Courtney Love, drawing a veritable who’s-who of fashion’s cool kids out east (he handed out several of his denim work shirts to shivering guests to stave off the post-sunset chill).

He has also been curating art shows at the hotel, as well as displaying his own work there. Photographs from his “The Lady of Shalott” series are displayed in the lobby. A pigeon fluttering in front of a bare-breasted Arizona Muse hangs at the entrance. He also collaborated with the Surf Lodge for his first short film. Scored by Philip Glass (he’s a friend), “Ghost of the Pale Horse” features French model Loulou Robert frolicking along the Montauk seascape. It launched on the LVMH Moët Hennessy Louis Vuitton-owned Nowness.com on July 4. The film ends with a nude Roberts walking through a haze of bursting fireworks.

As for his own Independence Day celebrations, Snow had a relatively relaxed evening, first stopping at the hotel, then heading to the lighthouse.

“It felt very American. I’m surprised, though,” he pauses. “We didn’t blow anything up.”