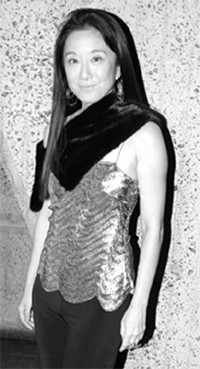 The Anniversary Party * Caine Is Able * More on “La Juive.”

How would you celebrate your 20th wedding anniversary? With a gala concert in your magnificent drawing room featuring 30 musicians playing gems from Handel? With Aprile Milo, today’s foremost Verdi soprano, singing Handel’s music especially written for Francesca Cuzzoni, another one of the greatest prima donnas of her time — and of all time? (Temperamental, too. When she refused to sing one of his arias, Handel threatened to throw her out the window). With a select guest list of 80 including a couple of princes, a couple of princesses, a couple of multimillionairesses and more than a couple of multimillionaires all seated at two long, beautifully flower-filled tables on an art-filled gallery on the second floor purveyed by Feast and Fete? Or all of the above?

I’m pretty sure you wouldn’t, but Peter Marino, the famous international architect and designer, and his lovely wife, Jane, celebrated their 20th exactly as described above. And talk about your nights to remember.

The Marino drawing room, which goes on forever with ceilings in the clouds and inlaid floors created by European artisans who spent months striving for perfection, is one of the most extravagant and beautiful in New York, filled with superb pictures and exquisite sculptures.

It is one of Peter’s many triumphs and, not to be too crass about it, an advertisement for the creative gifts that have made him a very rich man with tremendous projects all over the world. It is the perfect room to entertain as many guests as one wishes — or as few — with a raised area at one end for the musicales and entertainments Jane and Peter and their friends love and a massive fireplace at the other end with seating for an intimate repast, if that’s what tickles your fancy.

Everyone seemed absolutely thrilled to be there, especially Aprile Milo, who was spectacular, dressed to divine divahood in black velvet embroidered in silver brocade. She put on her spectacles, arranged her music stand and let ’er rip. She was in splendid form, as were the members of the new New York Chamber Opera Orchestra, conducted by Anthony Morss, all having their lyrical way with violins, violas, cellos, bassoons, oboes, a double bass, a trumpet, a flute and a harpsichord.

And this is who was there looking as though their souls were being stirred — but who really knows: Princess Christina of Holland; Anne Bass with Julian Lethbridge; Princess Firyal of Jordan; Alba and Francesco Clemente; Nan Kempner; Vera Wang and Arthur Becker; Kay Meehan; the Greek heiress, Doda Voridis, just in from Athens; Mexican heiress Paula Cussi; American heiress Louise Grunwald; Brooke Hayward Duchin and Peter Duchin; David Martinez, the Mexican billionaire (Peter Marino is designing his $45 million apartment in the Time Warner Building); Alexis Gregory; Janine and Tom Hill; Thierry Millerand; Susan and Charlie Moss; Christine and Stephen Schwarzman; Harold Koda of the Metropolitan Museum; Shelby White, and last but never least, Paige Rense, the editor in chief of Architectural Digest, who has seen some of the greatest dwelling places in the world and knows one when she sees one. Congratulations Jane and Peter and many happy returns.

Michael Caine may yet take home another Oscar nomination for his performance in Sony Pictures Classics’ “The Statement.” Michael plays a former Vichy government soldier who collaborated with the Nazis and after being declared “executed,” as in dead dead dead, he escapes and spends the rest of his life on the run hiding from the various groups who desperately want him. The supporting cast includes Charlotte Rampling, Tilda Swinton, Alan Bates and Jeremy Northam. Michael’s two most recent Oscar nods were for “Cider House Rules,” for which he won, and “The Quiet American.” Sony Classics’ extraordinary documentary, “The Fog of War,” about ill-starred Robert McNamara is also expected to win an Oscar. That was McNamara sitting alone — unnoticed — in the Regency Hotel dining room eating a Caesar salad and waiting for Dany Jucaud of Paris Match to do an interview.

The late Romy Schneider’s look-alike daughter, Sarah Biasini, will star in her first film playing Julie Maupin, the illegitimate daughter of Madame de Maintenon, first the mistress, then the wife of King Louis XIV. Marisa Berenson just left for France, where the movie, called “Julie Maupin,” is filming. She will play Madame de Maintenon. In the film, Julie travels to Paris from the country to find her mother and to claim her rightful place, whatever that may be. Afterwards, Marisa will remain in France to costar with Rupert Everett in the movie, “People.”

Mikhail Baryshnikov, Anna Wintour, Cari and Matthew Modine, Donna Dixon and Marisa Berenson were among producer Paula Heil Fisher’s guests at the opening night of the Metropolitan Opera’s revival of “La Juive,” of which Fisher is producing the documentary. In addition, Paula is planning to produce a feature film, “La Juive”— she’s already started the screenplay — and wants Natalie Portman for the lead.