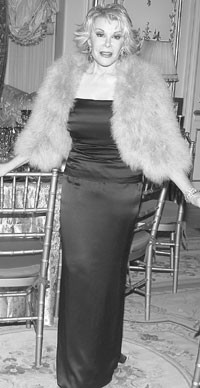 Joan Rivers’ far-flung penthouse apartment in Manhattan is a dazzling thing of soaring ceilings, golden boiserie, crystal chandeliers and pale silks and satins everywhere. It’s really the height of luxe and the perfect place to give a dinner party, which is what Joan did in style the other night, inviting close friends to celebrate the 20th wedding anniversary of Blaine and Robert Trump. Joan did not spare the horses nor bar the holds.

Preston Bailey, who is responsible for many magnificent parties in New York, was called in to decorate the dinner tables in red and gold. Covered in Chinese brocade fabric embroidered with a bamboo motif in antique gold, they were centered with huge gold and enamel Chinese vases, big enough to hold maybe a small person or enough gold coins to send Bill Gates back to Seattle to pull down his curtains. I mean, big.

In lieu of a little person or enough loot, they were filled with explosions of manzanita branches hanging with hand-sewn rose petals, tiny fresh cranberries and burgundy orchids. At the base of each vase were embroidered red Chinese slippers filled with orchids, and hand-blown amber vases holding kumquats were arranged around the tables. You would have loved the napkins. Folded like fans, they were tied with golden ropes and held an orchid. The chargers and glasses were edged in gold and the place cards were tiny painted animal figurines: turtles, dragons, elephants. A Chinese emperor would have been right at home nibbling on Peking duck rolls and crabmeat wonton. Hold the chop suey. The desserts were miniature wedding cakes made of raspberry and vanilla cream and garnished with red and gold beads.

And these are among the nears and dears who were there: baseball legend Cal Ripken and his wife, Kelly, dressed in Vera Wang; Lynda (Wonder Woman) Carter, in Escada, with her husband, Robert Altman; Linda Bruckheimer, in Chanel, with her husband, Jerry Bruckheimer, the prolific producer of big movies and big TV shows; Anna Wintour and Shelby Bryan; Libby and Basil Mavroleon; Carolina and Reinaldo Herrera; Lisa Burgett; Pauline Pitt; CeCe Cord; Desiree Gruber; Astrid and Kip Forbes; Blaine’s son Christopher, and on and on into the night.

John Loring, Tiffany’s longtime creative director, will escape the frightening weather in New York with a trip to Palm Beach next week. He will be welcomed by such as Pauline Pitt, Paige Rense, Hillie Mahoney, Jessie Araskog, Nancy Brinker and Jean Tailer with a party at Cafe Boulud in the Brazilian Court given by Leslie Schlesinger, the wife of owner Richard Schlesinger, who has just redecorated the legendary hotel. Loring will be staying at his newly renovated and decorated vintage cottage in the landmarked Flamingo Park section of West Palm Beach where it’s cute, chic and cheap, at least compared with the $50 million piles that dot Billionaire’s Row, across the bridge on South Ocean Boulevard in Palm Beach. Leave it to John to sniff out a real estate find. He’s done it before and he’ll probably do it again.

The beautiful actress Jessica Brooks and Aden Gillett, both British and both stars of the just completed film “Collusion,” are coming here from London for a small and private screening of the movie on Feb. 8. You all remember Aden. He just finished starring on the London stage in the hit revival of Harold Pinter’s “Betrayal,” which is now being filmed. He and Jessica will be arriving with the film’s producer, John Burridge, and the writer/director Richard Burridge, his brother. The screening will take place at the Tribeca Grand Hotel and the reception will follow at the hotel’s lounge outside the screening room. “Collusion” is a suspense story inspired by an art museum heist 10 years earlier, with a stunning twist ending. It includes all other top British stage and television actors including Imogen Stubbs, the wife of the famous British director Trevor Nunn. Expected at the screening are Cari and Matthew Modine, Lauren Bacall, Joy and Regis Philbin and Donna Dixon and Dan Aykroyd and others too theatrical to mention.

You’ve all heard Ben Affleck’s engagement to Jennifer Lopez is over. Well, Ben has been in Berlin promoting his latest movie, “Paycheck,” and busy downplaying his reputation as the Sexiest Man Alive, happy that Johnny Depp has taken his place — in that particular contest, at least. Ben modestly compares himself to a statue, and he doesn’t mean Michelangelo’s “David.” “I’ve got a lot of physical flaws, for example, a huge head. Have you ever seen the statues on Easter Island?” Oh, come on, dearie.

Ben’s best friend, Matt Damon, is also in Germany, where he’s making “The Bourne Supremacy.” They’ve both been photographed out carousing in clubland — you can never escape the paparazzi — with a bevy of sweet young things who have been clocked following them both back to Matt’s penthouse for breakfast or whatever you do at 5 a.m. in Berlin. All good clean fun.