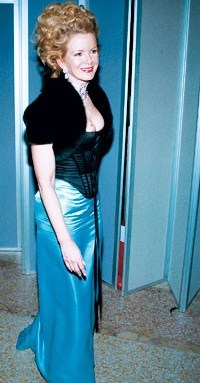 Breathed there a soul among the 700 guests at the Metropolitan Museum’s Costume Institute gala who didn’t catch a glimpse of what a choice selection of New York’s finest (not the police, dear) looked like barely covered from the waist up? Truly it was pop-up, push-up time for some of the most beautiful and celebrated women in society and fashion. And what wasn’t uncovered was strapless, so when too much décolletage makes you dizzy and shoulders are your thing, the night was made for you. Ah, sweet mystery of flesh.

If you used your imagination, the spectacular soiree was a sort of giant seduction scene in keeping with the party’s theme, “Dangerous Liaisons,” a 21st-century replica emulating an 18th-century revel, where a lot of cutthroat, terribly upper-class types were up to no good, ripping reputations and bodices with equal gusto. If a bodice was ripped at the party, I didn’t see it, and, for the most part, reputations remained more or less unshredded. So, the result was a great success, raising money and making a lot of people’s eyes roll — usually downward.

One quibble: The museum’s American Wing, glorious though it may be, is not the ideal place to give this annual gala, referred to always as The Party of the Year. There are too many blind spots. For instance, from a certain part of the room, many of the guests couldn’t see the co-chairman, adorable Renée Zellweger, in a backless, golden dress designed by Carolina Herrera, as she spoke from the podium. And they could certainly hear but they also couldn’t see more than the long legs and cuckoo jacket of Hugh Jackman as he sang from the same place. One remembers the days when this party was held in the museum’s cafeteria, where you could see anyone who was everyone and that’s what it’s all about, isn’t it? After all that dressing up, who the hell wants to blush unseen? Not anyone I know.

Lord Rothschild, Jacob for short, England’s answer to all things cultural, and Mrs. Charles (Jayne) Wrightsman, the great donor of 18th-century furniture and artifacts to the Met, were the honorary chairmen of the evening. She wore a sumptuous white, lace Chanel gown, embroidered and feathered to the nines. Along with Zellweger (who, by the way, wiggled her little golden butt like a happy puppy when she met Tom Ford), Anna Wintour, always the chicest woman in any room, was the co-chairman of the extravaganza. Anna wore a white, silk Dior column, bejeweled with square-cut crystals under a crystal embroidered coat, like those worn at court during the period. At dinner, she took the coat off, but when she put it back on, the challenge of getting buttoned up required a gentleman to go down on one knee to accomplish the task, as startled guests passed by.

Asprey underwrote the benefit — was it $1 million? And dinner was served on Asprey’s exquisite china while Lawrence Stroll, Silas Chou and Edgar Bronfman Jr. — they own the place — proudly looked on.

On a night like that, in a crowd like that, it takes a strong woman and a strong man to stand out, so here are some of the standouts: Mercedes Bass, in a black, bare-shouldered, Vera Wang gown, her neck covered with sapphires the size of little cupcakes; Charlize Theron, blonde and beautiful in black Dior couture with a little fur bolero and a choker — pearl and diamonds; Stella McCartney, in a strapless plum dress of her own design with a floating handkerchief hem, an antique diamond bracelet that belonged to her late mother and a gold mesh bag that lit up when her cell phone rang, and Linda Evangelista, superb in a striking Gaultier couture dress that showcased her figure from every angle.

Then there were Annette de la Renta in black with ropes of diamonds hanging to her waist, Lynn Wyatt in an orange and white chiffon dress by Oscar de la Renta and Bernadette Peters, tightly laced into a cream-colored Donna Karan column she said she hoped she’d be able to sit down in. She sat down like a pro.

La bella Herrera wore a corset under her taffeta blouse with big sleeves and a full skirt. Jennifer Lopez arrived with her hair piled high and her bosom pushed up to match. She wore a complicated black confection by Dolce & Gabbana, who accompanied her to the party. Did I mention that it was a rain-drenched night? D&G had to pick up her 4-foot train to keep it out of the rain on the museum’s wet steps when they daintily escorted her into the gala, untouched by the muck. Think Marie Antoinette entering Versailles with her courtiers lifting her dress to make sure she didn’t fall flat on her face in a puddle. Blaine Trump, gorgeously dressed by Michael Kors, wore a black-and-blue 18th-century gown, complete with a black beauty mark on her left cheek and another tiny heart-shaped one on her right breast. Naturally, she was a sensation. Then there were Vera Wang in a jeweled, beige chiffon by Vera Wang; Lauren Bush, in a black jersey halter dress by Michael Kors, charming her table; Pat Buckley in vintage Bill Blass taffeta (Pat ran this party with great flair and success for many years); Deeda Blair and Carroll Petrie, seated at the same table, who were their usual elegant selves, and great-looking Julianne Moore, who brought her great-looking husband, Bart Freundlich. Princess Arriana von Hohenlohe Boardman wore a vintage black-and-white ball gown by Mainbocher that belonged to her husband Dixon Boardman’s mother, and a pearl and ruby necklace. Sophie Dahl was in an amazing flesh-colored, pleated gown by Alberta Ferretti. Sally Albemarle was in a poison-ivy green dress by Gucci and aglow with diamonds.

So, let’s give the men a little attention: Karl Lagerfeld was in rare form in a black dinner jacket with caviar beading on the lapel and across the entire back of the jacket designed for Dior Homme by Hedi Slimane. Karl dripped ropes of 18th-century jet beads and a silver fleur-de-lis. He said the 18th century remains one of his favorite periods and when asked if he’d ever had a dangerous liaison, he laughed and said he hoped to have more. Oh, that naughty Karl. David Lauren wore a ruffled shirt with no tie, and on him, it looked right. Everyone was thrilled to see Marc Jacobs, who has been such a huge success in the fashion world. Marc always looks casual but somehow, no matter where he is, pulls it off. Sexy Benjamin Bratt was there with his wife, Talisa Soto, and Marc Anthony was careful not to enter or leave with Jennifer but met up inside for dinner when the cameras were banished. Hamish Bowles wore a black-and-white printed djellaba, which he got in a souk in Morocco, over his dinner jacket. The model Amber Valletta was striking in a powdered wig and everywhere you looked there were Diane von Furstenberg and Barry Diller, Julia and David Koch, Frank Richardson and Judge Kimba Wood.

So, please raise a glass of Veuve-Clicquot champagne to the pleasure-bent lot for the booty they helped raise — well over $3 million.