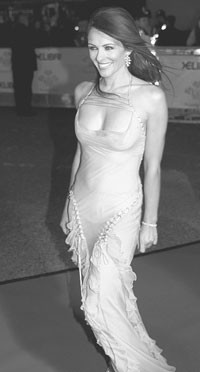 Cameron Diaz, 31, has made it clear for a long time that her heart belongs to Justin Timberlake, 23. She knows Justin loves the limelight and wants to stay there, so she’s beating the bushes for a movie in which they can costar. Cameron visited the pop star in Toronto, where he’s doing the movie “Edison,” and she thinks he’s ready for a romantic drama with her as his love interest. Who else? She has even asked her pal, Drew Barrymore, who has produced Hollywood movies, to help them find a script to showcase their talents. And, incidentally, to keep them together night and day.

As for Drewsie, she keeps saying she loathes jogging but now she sees the value of the exercise since it keeps her by the side of her boyfriend, Fabrizio Moretti. “I picked up running because I needed an outlet. Plus gravity definitely does have an effect on the body at a certain point.” So sayeth the sage. Whatever, it’s all the better to fit into the wedding dress her friends say she’s planning on slipping into soon.

Speaking of weddings, marriage fever is running rampant, with Lucy Liu quietly making plans to marry her playwright boyfriend, Zach Helm, this summer. Lucy insists the wedding will be a very private affair because neither of them is “into big, showy events. I know that when you’re involved with Hollywood, it’s expected you will put on a big extravaganza or do something outrageous, but I’m not like that. It’s more about the feeling inside, it’s not another movie set.” So sayeth the sage

At least a thousand very rich, rich and not-quite-so-rich, sweet-smelling guests will surge into the Grand Ballroom of the Waldorf-Astoria on Monday night, where the “Hot Pink Party” will celebrate the 10th anniversary of the Breast Cancer Research Foundation. I say sweet-smelling advisedly because Evelyn Lauder of the Estée Lauder cosmetics empire — which perfumes, paints and treats famous, infamous, and not-really-notable-at-all faces and bodies the world over — is the chairman of the evening. She is the founder of the Breast Cancer Foundation, which is dedicated to preventing and curing this illness, and with a little help from her fans and friends over the years, has made it a tremendous success. This party alone has raised more than $5 million, already having sold 15 tables at $100,000 each. Donna Karan bought the first one.

Elizabeth Hurley is the evening’s mistress of ceremonies and the one-and-only Sir Elton John will rock the room as he did last year when the sweet-smellers shook the Grand Ballroom and practically danced on the tables.

A royal princess, a royal prince, a serene prince, an earl and a countess and another count and countess, plus assorted engaging commoners, graced the entire back room at Swifty’s the other night, where New York hostess, Mrs. Lawrence Copley “Lee” Thaw, in a little print dinner suit by Oscar de la Renta, gave a dinner for all the above to thank them for their support of Venetian Heritage. The royal princess present was Princess Michael of Kent and the royal prince was Dimitri of Yugoslavia, designer of precious jewels for precious people. The serene prince was Pierre d’Arenberg, the half-American and all-personable gentleman with estates scattered hither and yon; the earl and the countess were the Albemarles, Rufus and Sally, who live in New York, and let us not forget Count and Countess Riprand Arco, who are every inch the internationals. Seated splendidly about the room were such as Doda Voridis, the golden Greek who just loves Venice; Nan Kempner; Aimee de Heeren; Mary McFadden; Patricia Patterson, and Liz Fondaras, plus their husbands, escorts and especially handsome Pierre Durand, the vice chairman of Venetian Heritage.

To get back to the Countess of Albemarle, née Sally Tadayon, she will be seated at the Gucci table at the Metropolitan Museum of Art’s Costume Institute party — the other huge party on Monday night. Sally, a star on the 2004 international best-dressed list, will be wearing a Gucci dress, naturally, from the fall collection, and a radiant glow thanks to her new role as the official U.S. spokesperson for the French skin care line, Darphin. Sally says, “I used to marvel at these beautiful creams in my mother’s bathroom when I was a child and now I am the spokesperson!” and “I’ve always been a supporter of things that I love and now I’ll be doing it officially!” They couldn’t have picked a more perfect person for the part.

Here’s a fun (?) story bouncing around London: Sadie Frost, 37, with her 22-year-old boyfriend, Jackson Scott, in tow, turned up outside her ex-husband Jude Law’s house in the middle of the night last weekend in what neighbors described as an agitated state. Sadie was banging on the door demanding to be let in and yelling that there were “things we need to discuss.” Jude, 31, who lives with his 22-year-old girlfriend, Sienna Miller, refused to acknowledge the intrusion, even though eyewitnesses — and you can bet there were plenty of them — say they saw him peeking out the windows. The whole neighborhood heard the ruckus, which went on and on until Sadie threw up her hands and left. The couple’s divorce is now six months old and Sadie is still insisting the whole public scene wouldn’t have happened if Jude had just opened the door and let her in. Their problems always revolve around their three little children and their custody. It’s possible this kind of dust-up may well land them back in court.

The Lenox Hill Neighborhood House will celebrate its 110th anniversary of good works on the Upper East Side. They are doing it at a spring gala on May 6 and among the chairmen are Liz and Felix Rohatyn, Diana Quasha, Sydney Shuman and Cynthia and Dan Lufkin. The evening will start with a cocktail preview of the International Fine Art Fair, where 60 exhibitors will present masterpieces from the Renaissance to the 20th century. Afterward, there will be a dinner dance at a smart, private club — its name comes later. Over two-dozen of the country’s top designers — including Albert Hadley, Lilly Pulitzer, Richard Mishaan, Robert Couturier and Lisa Jackson — will create original table decorations inspired by Father Time. Bunny Williams, John Rosselli and Tiffany’s very own Robert Rufino are the night’s design chairmen, insuring it will all be pluperfect. About that Father Time theme, the gala is called “Moments in Time” because of the birthday and the sponsorship of Walter Fischer, the chief executive officer of Rolex USA. Get it?