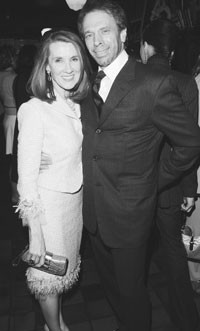 Elaine’s was chockablock full the other night — I mean the world was there — with fans and friends of Linda Bruckheimer. You all know about Linda. She wrote that wonderful bestseller, “Southern Dreaming,” and now her second novel, “The Southern Belles of Honeysuckle Way,” has just been published. After the blowout at Elaine’s, Linda’s closest friends repaired to the cozy little cafe R.S.V.P. for a celebratory repast, in keeping with the book, of crab cakes, fried chicken and strawberry shortcake, given by Blaine and Robert Trump, their closest friends. Linda was married to Jerry Bruckheimer, the incredibly successful movie producer, at the Trumps’ house and that’s close enough for anybody.

Doubles will have a party for the Chase Wildlife Foundation tonight at Doubles, naturally. It’s called “Dances for Wolves” and the evening is dedicated to helping wolves everywhere, the four-legged kind, not the two-legged kind often seen prowling about the city. Such environmental types as George Baker, Fernanda Kellogg, Barbara Uzielli and Nicole Limbocker are on the committee. Oh, and Wendy Carduner, the big boss lady at Doubles, says there will be a live Arctic wolf on hand to stir things up. On hand? In a cage? On the loose? Oh, what the heck. Anything to be different.

On May 6, Doubles will celebrate its 28th anniversary with a black-tie gala, “Bubbles at Doubles.” Peter Duchin will play for such expected worthies as Pat Buckley, Nan Kempner, Pat Patterson, Jamee and Peter Gregory, Dina Merrill, etc., etc., etc. — some of whom were maybe not even born 28 years ago.

Pregnant Heidi Klum and her Italian boyfriend, Flavio Briatore, have kissed and made up, putting an end to the recent rumors that she was seeing pop singer Seal and that Briatore, forever on the prowl, had caught starlet Vanessa Hilger. This will be particularly good news to their baby, who is due to arrive by stork next month. Friends of Heidi and Flavio say they will marry and that it’s 100 percent certain. Uh-huh.

Elizabeth Hurley is making plans to expand her family after she marries her beau, Arun Nayar, this fall in India. Hurley has even picked out a new $7.5 million house in London that she is now bidding on. The elegant town house is on Sloane Square, just down the street from Gwyneth Paltrow and Chris Martin’s place. Hurley will sell the $4 million residence she has in the English countryside, along with its memories of the hectic years she spent with Hugh Grant. Liz, whose son, Damian, just celebrated his second birthday, says she would like to have two or three more children. First comes love, then comes marriage, and then — uh-huh.

Rod Stewart’s ex, Rachel Hunter, the blond, beautiful, strapping former supermodel, is supposed to be acting cozy with Anthony de Rothschild, the son of Sir Evelyn de Rothschild of New York and London. The story goes that Rachel walked into the trendy London disco Eve, which Anthony just happens to own, and it was fate — or something very close. His friends say he couldn’t believe his luck when Rachel landed in his lap. Believe it. Rachel’s last boyfriend was Wes Scantlin, the lead singer of Puddle of Mudd. Apparently, she’s trading up.

Beyoncé has been invited to Buckingham Palace for dinner and it was Prince Charles who did the inviting. The singer will perform for the Prince’s Trust Urban Music Festival on May 8 at London’s Earls Court, and the royal dinner will take place shortly after. Beyoncé even sought the advice of etiquette experts who are advising her on royal protocol because she doesn’t want to make any mistakes. The big decision, of course, is what she should wear, and she’s considering racks full of dresses from several designers. Last week in Phoenix at the Verizon Ladies First Tour, she wore head-to-toe gold spandex and tossed rose petals at her fans while reclining on a throne borne by bare-chested muscle men. Please. We’ll have no more of that. It’s always better to be understated at that palace, dearie.

Annenberg heiress Dana Hammond — her uncle, Walter, was the greatest of philanthropists — quietly married neurologist Patrick Stubgen after a seven-year courtship. They got themselves engaged while on holiday at the Sandy Lane Hotel in Barbados last month and were married two weeks later at a simple ceremony at their Park Avenue apartment. Even their gold wedding bands were simple. They were showing them off during Dayssi and Paul Kanavos’ “Do Not Disturb” weekend in Miami at the new Ritz Carlton, which the Kanavoses own. Also in Miami for the fun weekend were Emilia Fanjul; Alfred Taubman; Susan Fales-Hill and Rick Hill; Rena Sindi; Rupert Everett; Rachel Peters; Elizabeth Kieselstein-Cord and her new boyfriend, Ted Hamm, and stunning Vanessa von Bismarck of the fine, old, German family. Vanessa was proudly showing off the blinding engagement ring she finally received after her new fiancé, Maximilian Weiner, misplaced it in his apartment for two weeks. Everyone was so crazed over the lost ring that they called in a hypnotist and a psychic, but to no avail. Finally, Max’s mother charged in and found the 6-carat rock in the trash. “Thank God for mothers everywhere,” said smart, dear, slightly mad Max.

The Florida fun at the Ritz Carlton kicked off with a Valentino fashion show to benefit the Miami Children’s Chorus. The benefit hauled in nearly $100,000 to help the children sing for others less fortunate than they are.

Brad Pitt is so happy to be out of skirts and back in pants again now that he is finished filming “Troy,” in which he plays Achilles and had to wear shorty-short tunics all the live-long day. But more than anything, he’s happy that he doesn’t smoke cigarettes anymore. His trainer convinced him to quit in order to maintain the intense body-building routine necessary for him to look luscious in the movie. They say Brad misses cigarettes more than anything and that he went through a withdrawal so hard that “I was ready to kill — which was actually helpful for the killing role I was playing.” He’s funny.