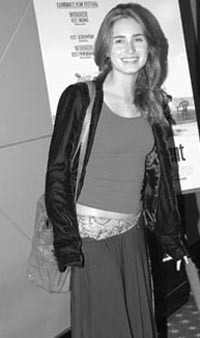 She is one of the leading philanthropists in the world with an enduring devotion to her late husband, billionaire financier Edmond J. Safra. She is Lily Safra and the latest of her memorials to him is the Edmond J. Safra Hall, which just opened at the Museum of Jewish Heritage in Battery Park City. It was a splendid evening — Lily only does splendid evenings — in a beautiful new hall with Diane Sawyer and Michael J. Fox at their wonderful and funniest best addressing the hundreds of guests, and the one and only Sir Elton John, Lily’s dear friend, singing his heart out at the piano. Nobody doesn’t love Elton John, especially Lily. And that goes both ways.

At the dinner after the performance, Lily, wearing a black Valentino, greeted her guests, all those lovely people you read about and talk about were there. New York District Attorney Robert Morgenthau, a pillar of the Museum, thanked Lily for her generosity. And this is who was there: Angelica and Neil Rudinstine, Carolina and Reinaldo Herrera, Blaine and Robert Trump, Carroll Petrie, Cecile and Bettina and Ezra Zilkha, Judy and Alfred Taubman, Susan and John Gutfreund, Lauren and John Veronis, Robert Higdon, Mortimer Zuckerman and Linda Wachner.

Amanda Hearst and Lauren Bush, friends and Elite models, have just been shot for Calvin Klein’s new book on great American beauties. They were photographed by Bryan Adams, who you might have noticed was recently named as one of the late Princess Diana’s lovers, part of a long list. Amanda also has been tapped for an eight-page fashion story for YM magazine, to be styled by Isaac Mizrahi right after Thanksgiving Day. Also, Lauren and Amanda have been chosen by a panel of experts from Debretts/Burke’s Peerage and the English glossies, Tatler and Majesty, as among the 20 most eligible young women in the world for — who else — Prince William.

They are the only two Americans on the list that includes such as Princess Madeleine of Sweden and Princess Elizabeth von Thurn und Taxis. England’s Channel 4 arrives in New York Monday to interview friends of Amanda and Lauren at the Chelsea hot spot, Viscaya. Although the girls are amused and flattered to be included in the show, which will be called “William’s World,” they have wisely declined to be interviewed on camera. So the show will use footage of them on the runway photographed at various New York benefits.

Amanda will spend Thanksgiving on the island of Parakeet in the Caribbean with her mother, Anne Hearst. Lauren will be in Houston with her mother, Sharon Bush, and her 17-year-old brother, Pierce, who will bring his new girlfriend, 18-year-old Melanie Pritchett, to lunch at the family home that Sharon just bought from her ex-husband, Neil Bush, the President’s brother.

You will be thrilled to hear that Lauren, who has been a vegetarian since she was three years old, will make her famous nutbread, the salad and her personal favorite, macaroni and cheese. On that day, the Bush kids will check in with their grandparents, former president George Bush and his wife, Barbara, who will be spending the holiday with George W. and Laura Bush at the family ranch in Crawford, Texas.

Both French and international houses of couture plus jeweler Mikimoto and the Crillon Hotel in Paris will join forces again this year to represent the 13th Annual Crillon Haute Couture Ball. This will be the eighth consecutive year that Mikimoto and the Crillon have jointly hosted the debut of 24 young ladies from the best families all over and all that goes with it. All the new debs will be wearing jewelry designed by Mikimoto, naturally. Some of them even have chosen to wear tiaras on this fairy-tale night, a tradition usually reserved for married women and princesses, but what the heck.

This year’s debutantes range from 15 to 19 years old and come from diverse backgrounds and 14 different countries including China, Mexico, Guatemala, the U.S. and Japan. This, the only debutante ball in Paris, will begin with a couture fashion show followed by a dinner and then a ball in the courtyard of the Crillon.

Among the girls who will bow are Dree Louise Hemingway-Crisman, 16, the great-granddaughter of famous American writer Ernest Hemingway. She aspires to be a model and actress like her mother, Mariel, who will be in Paris next year to make her directing debut with the film adaptation of Hemingway’s novel, “A Moveable Feast.” At the ball, Dree will wear a dress designed by Christian Dior.

Alexis Saperstein, at 15 the youngest debutante this year, will open the ball dancing the first waltz with Stephane Bern, who is in charge of the evening. Her mother, Suzanne, is an important client of haute couture and both mother and daughter together will pick out Alexis’ gown designed by Givenchy.

Diana Mellon, 16, lives in New York but she is a member of the fine old Mellon family of Pittsburgh who built, among other edifices, the National Gallery of Art in Washington. Carolina Herrera has designed her almond green gown.

Carolyna De Laurentiis, 15, the daughter of Martha and Dino De Laurentiis, the celebrated Italian movie producer, will wear a dress created for her by Roberto Cavalli, a family friend.

Princess Caroline von Thurn und Taxis belongs to the noted family that founded the Courier and Mail Service by order of the German Emperors from the 15th to the 19th centuries. Today, the family is divided into the Bohemian and German lines. Her father, Prince Viktor, and Caroline belong to the Bohemian line but they also are related to the German line through their cousin, Princess Gloria von Thurn und Taxis. Caroline will wear a dress by Versace.

To commemorate the “Year of China,” the ball will include for the first time three Asian debutantes. Bao Bao Wan comes from a well-known Chinese political family. Her grandfather, Li Wan, is former chairman of the Chinese National People’s Congress and the former executive vice premier of China. Her father, Jifei Wan, is the chairman of the Chinese Chamber of International Trade and represents China’s business interests worldwide. Currently, Bao Bao is spending a year in Paris to study French and art history. Alber Elbaz at Lanvin has designed her gown. Penelope Pei-Tang, 19, is the niece of famed international architect I.M. Pei. She is a student at Princeton, studying architecture and visual arts, and she will be dressed by Zac Posen. Candy Soo is originally from Singapore and studies film at Boston University. She will wear a gown by Zang Toi, the New York-based Malaysian designer.

Contessa Costanza della Gherardesca, 17, is a member of an ancient Italian family and she represents its 32nd generation. Her family still resides in the same estate in Tuscany where it has been since the eighth century. Costanza will wear a gown by Vivienne Westwood. Another lovely debutante is Lola Toscani, 17, the daughter of fashion photographer Oliveiro Toscani. Lola, who is now studying in Paris, will wear a dress by Valentino.

Anastasia Tolstoy is a direct descendent of Leo Tolstoy, the author of “War and Peace” and “Anna Karenina.” She lives in London and will represent the English designer, Neil Cunningham.

Tatiana Ojjeh, 16, lives in Switzerland. She is the granddaughter of the prominent businessman, Akhram Ojjeh, who has been a fixture in Paris for many years. She will model a dress designed by Jean Paul Gaultier.

The honorable Lara Hughes-Young, 16, comes from a fine old English family, part of the land-owning aristocracy. Her father is Lord St. Helens and her grandfather was the Private Secretary to Winston Churchill. Lara will wear a gown by Chanel. Chloe Delevingne, another British deb, belongs to one of the most aristocratic families in Britain and will be dressed by Bruce Oldfield.

Patricia Hempstead from Guatemala is now studying in the U.S. Ralph Rucci will make her dress. He is the only American designer to be invited to do couture shows in Paris. The other debutantes and the gowns they will be wearing will be written about here next week.